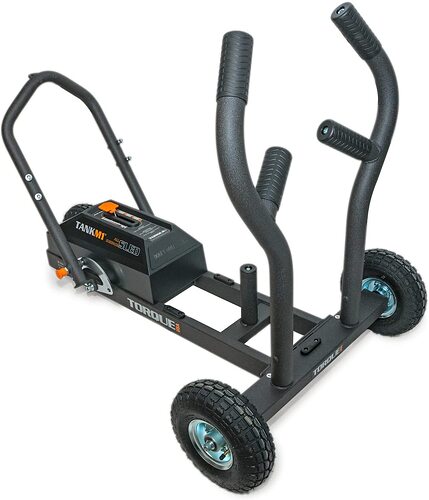 You talked, we listened. We designed the TANK M1 based on your feedback and ideas. With easily removable handles and compact design, the TANK M1 was designed with garage gyms and personal trainers in mind and allows you to take your sled training to...

Training sleds are awesome and versatile, whether you’re pushing or pulling heavy for strength or going lighter for metabolic conditioning. The problem has always been twofold: you need the right surface, and you’ll eventually need a mountain of weight plates.

The Tank M1 solves both issues. First, it has wheels, so any surface will work. Second, it has built-in resistance in the form of a mag-force variable resistance brake. That just means the harder you push it, the “heavier” it gets. Check it out on Amazon.

T Nation earns from qualifying purchases as an Amazon Associate. Read about our policy.

I had one and really disliked it. Much more expensive than a sled, hard to keep from skidding, doesn’t work well outdoors on grass or dirt, and just wait until you pick up a nail or industrial staple in the front tire. I also want to be able to “grind” against heavier resistance when dragging heavy without having to feel like I’m trying to run to increase resistance. It may be better in this regard for people who are looking to increase sports performance not related to weightlifting.

The design is extremely poorly done for maintenance. Sold it immediately after dealing with changing the tire.

FWIW it may be great for people that have a dedicated concrete or turf area nearby. If you live in a rural area I highly recommend saving $700 and buying a sled.

Thanks for adding your review. I’ve only used something like this indoors on that green indoor-outdoor carpet stuff. I liked it. Allows you to just push harder in a short space and still get properly wrecked.

I have one and I like it a lot. I got it to use in my driveway, which is done with some really nice pavers that I didn’t want to jack up with a traditional sled. So long as I load the sled with ~135# in plates, I’ve had no issues with the tire skipping.

If I had a driveway I didn’t care about I would have gotten a traditional sled or prowler instead. The one thing I do miss with the Tank is that as Isaiah63 notes, you can’t really grind against it, which means it doesn’t work so well as a substitute for lower body lifting for those of us with beat up joints. I’d still get mine again though.

My gym got one of these recently, and put in a turf strip. I like it. True about low-speed being easy but for me it feels like an autoregulated resistance.
The one at my gym is the same make but slightly different model, both ends are the same - which is great because you just go to the other end instead of turning the whole thing around.