T Cypoinate Once a Week vs Twice a Week

For what it’s worth I’ve been on trt for the better part of 20 years and drove myself crazy trying to find the “ perfect “ protocol . I have come to the conclusion there isn’t one , I have tried it all and finally said the hell with it and went to twice weekly and quit worrying about it and wouldn’t u know I feel the best in years ! I think 90 % of problems are from over thinking it

but some of it (the impaired cognition, memory and vocabulary degradation) I think is from HPTA shutdown.

Maybe, or is it because you’re obsessed with your TRT regimen and now spend much of your enthusiasm, inclination to learn and available cognition reading research papers and deep diving forum threads?

Nothing personal at all, I think this could be the case for many in this sphere. I have certainly been there.

@TrtNow to answer your original question with my own 2 cents, twice a week is probably a nice balance of stable levels vs injection hassle, providing you know the level to keep all your hormones stable at. In harmony… no easy task.

I hypothesise that the reason many of us do well on once per week is because we don’t know the exact number to keep our hormones at. Once per week allows us to overshoot that mark and then as levels decrease throughout the week the chances are that we will be in the sweet spot for a couple days or so.

The opposite of this might be injecting everyday and you’re hormones being consistently stable but way out of whack. I tend to feel good mid range and worse at the upper end. >1000 TT is good for the gains I must admit….

I’m quite sensitive to hormonal fluctuations. However anecdotally I’ve never felt a difference between 1-2x/wk unless my peak is supraphysiological or my nadir is too low. At the dose I take, neither is the case.

I liked daily shots but it gets old after awhile and also I have to watch my levels cause they tend to creep up if I don’t adjust my dose down . I get a good bit of difference in daily vs twice weekly on the same dose

What is baffling to me is that everyone seems to WANT steady levels.

That ISN’T the way the body works. Test is pulsed throughout the day, highest in the morning, and lowest at night. It’s very UNsteady.

Gels/jatenzo would mimic the body best.

Gels/jatenzo would mimic the body best.

We’ve discussed this off and on but I wanted to share this study which would be applicable for men who want to (1) do TRT while preserving fertility OR (2) have done TRT and want to try and recover their HPTA/fertility while maintaining reasonable Test levels. Converting Men From Clomiphene Citrate to Natesto for Hypogonadism Improves Libido, Maintains Semen Parameters, and Reduces Estradiol Obviously Natesto is a pricey option but there is a cheaper option with compounding pharmacy (at least … 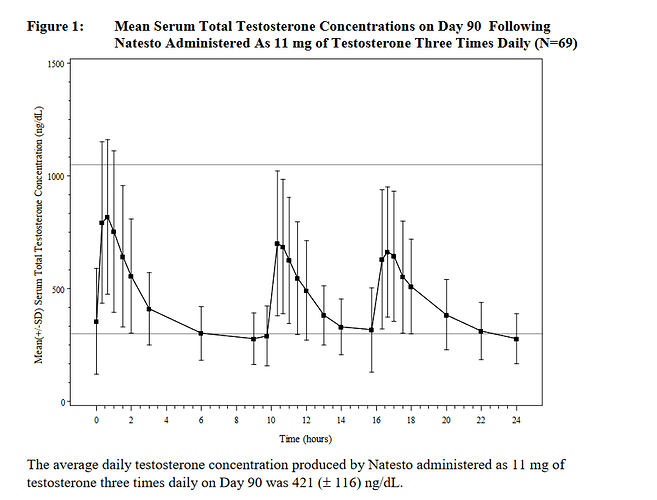 TLDR (great suggestion by @kazuya_mishima1): Danny and the TOT folks are mistaken to put it politely with respect to pharmacokinetics and dose response of injectable exogeneous testosterone. They act like it’s some mystery how you will respond to injectable testosterone. It really isn’t and we can put a very confident estimate on it. Many guys running TOT protocols (150+ mg/week) are way above physiologic levels all week long 24 hours a day. Read on if you’d like to understand with an examp…

Well to play devils advocate I think the argument is weekly stability as even though injecting something like cyp daily is taking it to the extreme it will still be closer to the daily ups and downs rather than having your peak and trough only once a week each.

I am not big on too much frequency and think people over do it, just seeing their argument for what it is.

For bodybuilding purposes, steady levels are best. But it’s not anything like normal male physiology with pulsation.

Why not low dose Test Prop 2X daily, every 12 hours @ 7.5 mg to 10 mg for a total of 15 to 20 mg, daily, similar to twice daily transcrotal cream or Test U injections or pellets continuously releasing a low dose of T?

My thinking is, since it’s more or less in and out of your system, emulating in a fashion, the circadian/pulsatile pattern of endogenous testosterone, as the level begins to decline, you do another injection, emulating another pulse. I understand pharmacokinetics don’t follow logic but been on Test E on and off since 2013, different doses, injection frequencies, IM/subq. Still ISO of my morning wood and some degree of reliable erections. Compounded cream on the scrotum only elicited prostate discomfort. Nothing to lose.

How quickly and negatively I react. Either the grapeseed oil or benzyl alcohol. I forget until the next time I try it. Became irritable, nasal congestion and generally feeling lousy. I’m going to move on, inspired by @roscoe88, trying a large bolus of Test E(250 or 300 mg) either every 10 days or 14 days.

What an un-needed pain in the ass

This is the route I was about to take before I heard about Jatenzo.

Have you had liver values tested recently? Just curious about the jatenzo so far.

I know it bypasses the liver on the first run of excretion, but my dr. still had his concerns.

Have you had liver values tested recently?

My ALT tested recently at 19 and was a few points higher before going on Jatenzo.

I know it bypasses the liver on the first run of excretion, but my dr. still had his concerns.

It’s the same with prostate cancer and TRT, it’s confirmation bias. So because other oral T options before it did cause liver toxicity, so to must Jatenzo.

It only took me 10 seconds to find this on the internet. This is a clinical trial and is what lead to the FDA approving Jatenzo for the treatment of hypogonadism.

Oral TU was not associated with liver toxicity nor did it cause an elevation in high-sensitivity C-reactive protein or lipoprotein-associated phospholipase A2 (cardiovascular safety biomarkers) after 365 days of therapy.

Why not low dose Test Prop 2X daily, every 12 hours @ 7.5 mg to 10 mg for a total of 15 to 20 mg, daily, similar to twice daily transcrotal cream or Test U injections or pellets continuously releasing a low dose of T?

I think the main issue with something like that for me is that it goes against what I’m trying to accomplish since it’ll give me much more stable levels.

I think the negative feedback loop on my HPTA causes me a lot of problems, perhaps more than most people (or maybe all other things being equal I suffer a greater degree of shutdown than most), but I don’t think the shutdown is a binary thing, and I have a theory that part of the reason I felt better on Prop was due to a lesser degree of HPTA shutdown than on longer esters (especially pinned daily) where my levels were at the top of the range pretty much 24/7.

So by injecting Prop 2x/day I would spend a lot more time at the top of the range, which is what I’m trying to avoid at least for now.

Of course all of this is barely educated speculation and I could be completely wrong, but it’s a hypothesis I want to test by keeping track of my neurosteroid production as well as LH/FHS values on a shorter ester protocol. We’ll see…

I also do twice weekly. My protocol was 200 mg. That puts my free t to 31 range (5-27( and total was 870 range( …- 850) on through. But many people on forums told me oh no it’s too high it means your peak is supra etc. So I reduced the dose to 150. 75 2x weekly. What I have found out with that new protocol is I lost size and and strength. I am not Euphoric anymore and have those dumb overthinking about things in life again.
My libido is still the same but when it comes to sex I lost motivation. Very odd.

@highpull on Internet and also ksman recommend to do twice weekly since it’s easier to time the AIs. Would you second that?
What do you recommend your patients when they are on a 200 once weekly protocol and they want to take adex. 2 x weekly. Some say since the levels drop after a couple days it’s hard to dose the second tab of ai hence why twice weekly injection is better. Really confusing.

Would love to hear your recommendation

But many people on forums told me oh no it’s too high it means your peak is supra etc.

As long as your hemoglobin is within range, and your other biomarkers are healthy, there’s nothing wrong being a little bit over the top.

My peak (@ 2 hours) is a bit higher and measured at 4 hours after morning dose.

I just found out through the pharmacist who said my insurance company is billed for Jatenzo at $3000 dollars a refill!

This may be more profitable than pellet therapy.

I suffer a greater degree of shutdown than most), but I don’t think the shutdown is a binary thing, and I have a theory that part of the reason I felt better on Prop was due to a lesser degree of HPTA shutdown than on longer esters

You would probably do very well on Jatenzo which has an 8 hour half-life and is why it’s dosed every 12 hours. I recently tested LH and FSH and testing was limited, both showed <1.0.

I was hoping for a little more accuracy but I think Kaiser labs are a bit limited. I’ll try LabCorp and see where these are.

If I remember correctly, testosterone propionate half-life is around 2.5 days and not 4.5 days like previously thought.