I’ve been doing 2x injections a week on my quads 150mg and had an E2 spike that caused me to lose a lot of the progress I made the month prior so I’ve decided to lower the dose a little to 135mg per week and do 3x per week MWF.

I feel like injecting in the quads 3x a week over the long term might be a bad idea and I’m curious if anyone has any other ideas on best ways to go about this. I’m curious about SubQ but never done it before and a little nervous to hop in without some professional guidance first…

I used to inject quads, but I switched to glute with a longer needle. I also do 3 times a week (most of the time).

I just lie on my side in bed and have no trouble turning to hit the inj site. Sometimes I also inject delts, depends on my mood and syringes that I have handy.

If you don’t want to do quads all the time, switch in or to delts. I’ve also inj pec a couple of times, just to see. I’m a fairly big guy and never had an issue with absorbtion, test levels are always about 1300ish on 180mg total a week.

Sub Q was more painful to me personally. I inject shallow IM daily in the delts, but throw in quads, pecs and ventro glute here and there. Quads are my least favorite though as I tend to hit, what I believe are nerves, more often than not so they don’t get injected very often.

You might consider 27g 1/2in needles and use the glutes.

Have you tried it? Do you personally know anyone who has?

That is irrelevant. There have been studies showing sq injections as effective as IM with testosterone. I’ve experimented with that needle when moving to more frequent dosing without noting any difference in absorption.

Also, I have dozens of patients using 27g 1/2in. These are guys taking two or three injections a week, so we’re probably talking about 0.2-0.4 mL per. I would not use a 1/2 inch for 1mL. These guys do fine and their lab results show no decrease in levels.

I’m pretty lean (and at age 66 I’m squatting 160kg, so I doubt I have zero ass) and 1/2 in probably makes it into muscle. I have never experienced any pain or bolus. However, some of the guys are pretty heavy so it may be a shallow IM or deep sq for them. Regardless, it is absorbed into the body.

If I’m taking once weekly dosing, I’d use the larger, longer, needle as the volume injected is more. 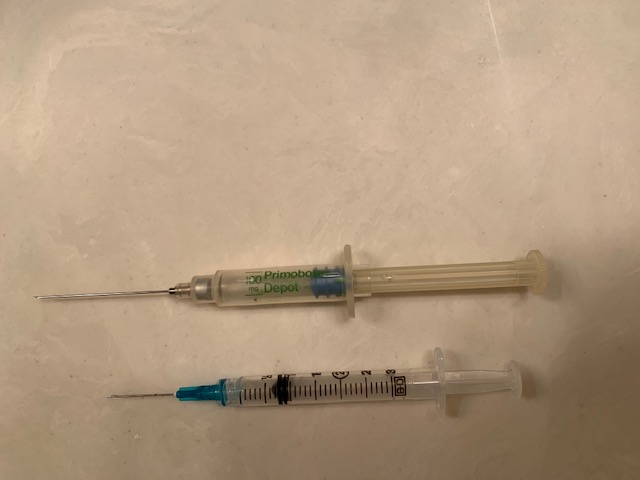 i use 1/2 needle myself - i only inject delts,quads,pecs and going to try calf soon. i tried subq early on and i just don’t see how it reaches a glute muscle and i dont want to be sitting on my ass with pain, as subq gave me pain where ever i injected and bruising.

When did that become a thing???

actually did it and it was a very easy injection, some virgin pip but will add that to my injection sites