I just want to share with you the scene I witnessed in my gym last Saturday night.

I usually lift very late in the evening, last hour or so before closing time, because of my MA classes. This way I get to avoid the crowd and most of the typical gym subtypes: teenage pencilnecks who curl in the squat rack, old weirdos etc.

However, there is one distinct group of 7-8 idiots in the gym at the same time as myself: slightly obese guys in their late 30ies and early 40ies, who spend most of the evening in the gym, mostly doing nothing and talking about watches, suits, cars and how to get a 19 year old mistress. With brand-name sweatshirts they give the impressions of old wannabe guidos.

They’ll share their latest tips about sex life from FHM and Men’s Health while doing curls, flies, and lateral raises and ranting about “young whores just wantin’ it”.

Anyway, last Saturday, about 15 minutes before closing time, one of them suddenly barged in the gym, wearing his typical “clubbing” clothes - a leather jacket,a sleazy silk shirt with long collars, moussed hair and sunglasses. It was 11 pm. And it was about to snow.

He proceeded to high-five his “boys” in the reception area and started yelling: “I’m gonna get fuckin’ laid tonight!”

He sprinted to the freeweights area, and started (still with the jacket and the sunglasses) to do a frantic superset (or a circuit?) of the following, mostly done with a very light weight for about 20 reps:

He spent around 30 seconds on each “lift”, practically jerking the weights with no regard to form or function. When he finished, he started muttering to himself: “Yeah! I’m gonna fuckin do it! Get laid!”. He was shrugging his traps, muttering to himself like a boxer pysching for a fight. He even threw some (crappy) punches, pretending to shadowbox.

Finally, one of his boys who were cheering and encouraging him from the side, “inspected” his biceps through the jacket. Obviously, results were inadeqaute because he yelled “fuck”, grabbed some 2.5 kilo dummbells and started curling.

I was somewhat pissed at this moron, and not wanting to punch him in the face decided to head to the reception area to cool before going the dressing rooms. From there I could see his 20-year old (but tuned!) BMW parked in front of the gym, with the lights on and the engine still running.

Next to the car, a slutty-looking, quite obese blonde with a bored expression on her face was smoking a cigarette.

Couple of seconds later, the moron barged out, yelled “Fuck yeah! NOW I’m fuckin ready!” to the blonde, they got in the car and drove away.

The whole incident lasted for about 10 minutes total.

I’m gonna trade my Viagra in for some of those pink curling dumbells. Yeah!

sounds like a fan of HIT. It would have been perfect if you went over there and said “hang on bud, listen to that:” and then let a long whiney fart out. and then said:

Shit, I was laughing so hard just from reading your story, I couldn’t imagine what shape I would have been in if I was actually there to witness that.

He got what he deserved.

Well, except for the BMW.

The Human race baffles me sometimes…

I can’t wait to own my own gym so I can fire the first motherf’er who signs up one of these freaks.

Nice story,gave me quite the laugh.

But calm down mate.Why did u get pissed? i see people all the time like this.
U should have high fived him as well and gone out on the town with him,u might have got laid

U are lucky your gym is open so late.I go in the last hour but my gym shuts at fuckin 7:30pm! place gets fuckin packed especially because of summer and everyone on their new year resolutions. 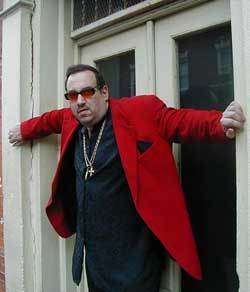 OK, scale of 1 to 10, how close is this pic to your protagonist?

[quote]Digital Chainsaw wrote:
OK, scale of 1 to 10, how close is this pic to your protagonist?[/quote]

HEY where’d you get my picture???

That might be my favorite new story of 2007 so far. Sometimes, you gotta just shrug and thank God for letting you be there to see stuff like this happen. There’s way better things to get hot about in life. This kinda shit is the comedic relief portion of the show…

Today I saw some guy with a beer gut curling DUMBBELLS in the squat rack. What the fuck is goin’ on…

Every time I have ever lifted on a friday or saturday there has been some guy in the gym talking about getting a pump for the club that night. Every time.

This made my day

[quote]Digital Chainsaw wrote:
OK, scale of 1 to 10, how close is this pic to your protagonist?[/quote]

Yep. That’s the type of guy I was talking about.

What’s your problem, Loppar? The important thing is that that man is happy, right?

[quote]BFBullpup wrote:
What’s your problem, Loppar? The important thing is that that man is happy, right?[/quote]

I don’t like the guy. Especially when him and his “entourage” take up the squat rack or the olympic lift platform doing nothing.

For me, a gym is not a social club. When I’m squatting, I don’t want a bunch of idle morons congregating around with observations like this:

“That sure is a lot of weight. I think this weighs even more that a washing machine. Washing machines are heavy, you know.”

“Squatting so low is dangerous. Believe me. You’ll mess up your legs or something”

“My friend who was a wrestler can legpress 500 kilos. I’m sure you’re afraid to use the legpress because your legpress numbers are pathetic”

“When I was in highschool I could bench 150 kilos easily. I also had a sixpack. Darn thing that metabolism”

Those guys are incredibly sad. Most of them have failed marriages behind them, teenage kids they don’t communicate much with and they spend most of their earnings on “clubbing” and “whores”, trying to give the impression of being “tough” or “connected”.

I dunno, I guess I’m subconciously afraid that in 15 years’ time I’ll also be lingering around the eliptical machines trying strike up conversations with hot women with phrases such as “So, wanna do some HORIZONTAL cardio?”.

I find it hard to believe anyone that stupid actually exists. I think you made up your story for entertainment purposes… which is cool I guess.

[quote]GhostNtheSystem wrote:
I find it hard to believe anyone that stupid actually exists. I think you made up your story for entertainment purposes… which is cool I guess.[/quote]

I wish I have invented him. Unfortunately, I’m not that creative. Life is “stranger than fiction”.

I’ve been lifting for the last 10 years or so and I have witnessed incredibly stupid people, stupid behaviour and stupid statements in the gym.

If if wanted to make up something, I would have made up something better, a story about myself benching 500 pounds and sleeping with Heidi Klum, for example. Not at the same time, of course.