BALTIMORE (WJZ)â??More than a dozen college football players are hospitalizedâ??all suffering from muscle damage. One of those players is from Baltimore, and his fatherâ??a local football coachâ??wants to know what happened.

Kai Jackson explains the case is now under investigation.

An investigation is underway to determine what made the players sick. Yet the manner and number that became ill is raising concerns about supplements.

A scare for players on the University of Iowa football team and their families. Thirteen athletes went to the hospital after whatâ??s being described as an intense workout.

Now doctors believe the players came down with a condition known as rhabdomyolsis.

â??Rhabdomyolsis happens when you have a breakdown of the muscle tissue,â?? said Dr. James Williams, St. Joseph Medical Center.

Williams says rhabdomyolisis combined with dehydration and the possibility of supplements is dangerous. 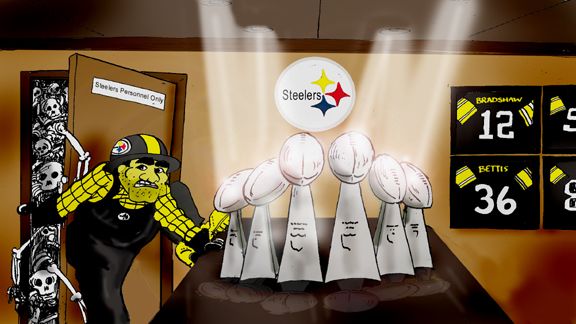 The end of the Steelers’ amazing run in the 1970s came a full decade before the NFL banned steroids. Nevertheless, there has been widespread speculation that the first part of the Steelers’ dynasty is tainted in some way by the fact that it helped popularize steroid use in the NFL. In the 1991 book “False Glory: The Steve Courson Story,” the former Steelers offensive lineman wrote that 75 percent of the offensive linemen on the Steelers’ Super Bowl teams in the late 1970s had used steroids.

Steroid use was, after all, not banned by the league at the time, and I wonder if the spotlight has fallen on the Steelers largely because they were so damn good. Not everyone agrees, though. “It started, really, in Pittsburgh,” Jim Haslett said in 2005 while coaching the New Orleans Saints. “They got an advantage on a lot of football teams. They were so much stronger [in the] '70s, late '70s, early '80s. They’re the ones who kind of started it.”

The Steelers challenged this statement, of course, but the ramifications – and suspicions – linger. A 2009 investigation by ESPN into the Steelers’ history with performance-enhancing drugs found an alarming number of former players suffering from heart ailments. “Even if there is no pattern or clue linking the deaths to steroids,” wrote the article’s author, Mike Fish, “since 2000, 17 former Steelers have died before they reached the age of 59.”

Still think this is all sensationalist anti-Steelers crap?

That list includes former Steelers guard Terry Long, who tried to kill himself with rat poison after testing positive for steroids in 1991. He died in 2005 after drinking antifreeze. A year before Long died, Steelers offensive linemen Justin Strzelczyk was killed in a fiery head-on collision with a tanker truck after leading New York state troopers on a 40-mile chase. Hall of Fame center Mike Webster died from heart failure in 2002 at the age of 50, tormented by years of dementia, drug use and homelessness.

Football players end up with significant brain damage from the hits - even without suffering multiple concussions. Ya think brain damage might be related to higher death rates?

Another round of this. Happens every couple a years.

And I’ve never seen steroids linked to homelessness before.