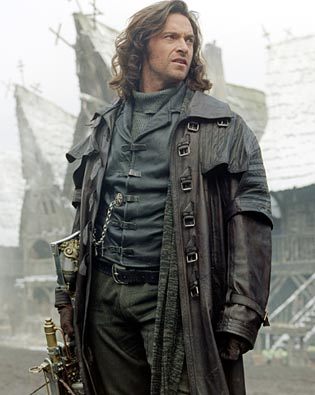 Hey first off, here’s a pic of Hugh Jackman in the starring role of “Van Helsing”. Now this sounds like a highly entertaining flick with a young Van Helsing battling vampires and werewolves using some really cool weaponry. One of which it seems Jackman is holding here…wish we could get a better view.

Other newz. If the next one causes your gag reflex to work in overdrive, I don’t blame it for happening. It’s happening to me, even as I type this:

Batman 5: It’s being reported that the “official” casting of Bruce Wayne/Batman is now done. And the lucky bastard is…Ashton Kutchner. He of “That’s 70’s Show”. He had tested for Brett Ratner for Superman, and rumor has it, did well. BUT, here’s the jest of this:
“Christopher Nolan wants Guy Pearce. I think that’s about the extent of it. Essentially, the studio has had another ‘Ratner’ situation on their hands, because the director wants someone, and the studio wants someone else. That someone the studio wants is Ashton Kutcher. Thankfully, it’s not as big a deal as the whole Superman thing [which has been madness], because in this place everyone gets along - and from what I hear Kutcher is the new Batman. Done deal”.

And now we move onto the next bunch of craziness:

Superman:
“Superman is looking a bit better. Remember the show “Roswell” on UPN? and “Star Trek”? Jonathan Frakes was the creator of the first and a star of the second. He recently did the “Thunderbirds” film. Anyway, looks like he might be doing it. He too has ideas for casting - Jason Behr and Colin Hanks - tested a week Friday - Behr for the lead, Hanks as Jimmy Olsen. Whilst Hanks is apparently ‘looking good’, Behr’s not a chance. Been a heap of actors in for Superman - Ashton too tested! as did Justin Timberlake, Brendan Fraser, Henry Cavill, Matthew Bomer - but only a handful for Olsen. At this stage - if things are locked down as they are expected to be this month - it’ll get rolling before December”.

The Punisher: Okee dokee! The teaser trailer is finally up in Quicktime: iTunes Movie Trailers

Holy crap. Are you kidding me??? We’re supposed to accept the star of “Dude, Where’s my Car?” and Kelso from “That 70’s Show” as the new Batman?

I guess if Keanu Reeves was able to move on from “Bill & Ted,” Kelso, I mean, Kutchner, might be able to do it too.

Aston Kuctcher…as Batman? Please tell me he signed a steroid deal with the entire country of Mexico if not that will be the skinniest Batman ever. Justin Timberfuck tried out for Superman? I can just see it now.

Superman: “Lex do you know I have a bullet proof ass?”

Van Helsing…damn I have to admit I don’t know who that is? Sounds kind of familiar. I love vampire movies. Uhrhrh…the good ones anyways. Ciao.

Arcane, that was some funny shit!

Personally, I would rather watch Van Helsing, Batman and Superman back-to-back… all starring Hugh Jackman than watch that Kutcher tard anyday.

What’s this world coming to?

Arcaine, thanks for the laugh. Much needed today!

Here’s somethin’ that was kinda cool. From a interview with Eric Bana (Banner/The Hulk) in the Houston Chronicle:

Bana still lives in Melbourne with his two children – a 4-year-old son and 1-year-old daughter – and his wife Rebecca, saying he doesn’t want to let acting go to his head.
Sometimes, though, he can’t help but gloat. He recently met with his friend, fellow Aussie star Hugh Jackman, in London while Jackman was attending the opening of X2: X-Men United, in which he played the blade-fisted Wolverine.
“For some reason, it still hadn’t dawned on me,” Bana said. “We were standing at the bar having a drink and I said, ‘Do you know something …’ And he said, ‘What?’ And I said, ‘You’re Wolverine, and I’m the Hulk. Do you realize that? It’s kind of weird.’”

Arcane, I almost fell out of my chair. That was great. Seriously, I will give up on Batman if Kelso plays the part. Though it might be good for comedic value.

That is weird also because, as I’m sure all the other comic book geeks know, Wolverine made his first appearance in The Incredible Hulk #181.

Keaton played The Batman masterfully, they need him back…

That Batman was Frank Millers Batman. The first was by far the best. I know he isn’t diesel like Batman in the comics, but hey.

Ashton though, no way.

As for superman, who knows. Comic book sup’s is a big guy and super clean cut.

I am concerned about the Punisher though. I wonder how, in todays sensitive times, the Punisher can be depicted in any way that is true to the character, which is extraordinarily violent.

Glad I made some people laugh. Pat I think your muscles are getting so big there crushing your brain. There is no “i” in Arcane you keep doing that.

Hey want to hear something funny as I was typing out Arcane I put a fucking “i” in it. Dammit you have contagious bad spelling Pat.

Funny thing is that Eric Banna or Hugh Jackman would make a much better Batman or SuperMan than Aston Kunter. Tee hee hee.

And I myself would make a much better lover for Demi. You listening Demi!!!

I’m still saying when I get the physique I could play a good: Batman, Spiderman, Punisher and most of all Greenlanturn(Kyle Rayner). Maybe I’m delusional. Yes I’m tooting my own horn.

Who’s Van Helsing? A badass vampire hunter? Noone answered? What’s he from?

Lastly I keep on trying to post this but it gets wrecked everytime(at least I never seen it up). Anyways it’s a link to this movie Underworld. Which looks good…bladesqueish vampire movie where vamps fight werewolfs. It’s sort of a rip off of WhiteWolfs world of darkness books. I’ve never read them but I have read excerps and other materials about this universe and let me tell you it fucking rocks. This underworld while cool and sexy is a typical hollywood watered down ass munch of a good idea. Here’s the link:

View the latest movie trailers for many current and upcoming releases. Many trailers are available in high-quality HD, iPod, and iPhone versions.

Let me know if it works. Ciao.

It looks like a crossbow to me. Van Helsing spent a lot of his spare time chasing around Dracula Arcane

You know now I remember him from Bram Stokers Dracula…almost put down Bram Strokers…I’m guessing that would be a much different type of movie.

Did anyone check out the underworld link?

Patrycya: Nice use of I’s. I have nothing funny to say thank you for your time.

They have a whole Mythology within their own company. Vampires, Werewolves, Mummies, Mages, etc. They could do one hell of a movie with just that. At minimum, some good Sabbat members should be in the script. ! =0)

Has anyone seen the movie Vampire Hunter D?

The Van Helsing get up and weopanry is quite similar to the look of Vampire Hunter D.

Why is Starbuck being played by a woman? Im not asking in a sexist misogynist way. Im just curious as to why they cast a woman for the remake.

Dan C. I’m assuming by Arc-Co you ment me.

I’m totally familiar with the entire World of Darkness setting and your right the sabbat or black hand would kick ass. Dan you better put the “good” in quotes when talking about the sabbat.

A few Tzimisce Vampires…namely that nasty fucker…Sasha Vykos. Scary for sure. That guy is just wrong on so many levels. Setites are another fav. Or go the other way and put in the Salubri.

Hey Dan look at my t-mag handle and guess how WhiteWolf inspired it?

PM if you want. Ciao.