Well its summer and i’m bored of working all day every day so I figure I’ll run a cycle log. I am getting ready to start a Test Pop, Tren Ace, Mast Prop cycle with d bol as a pre workout boost (I saw saps had been using and decided to give it a try). My cycle is laid out as so:

I know this split between the tren and mast probably looks a bit odd, however, this is mostly due an interesting purchase that I made and that I already had an extra bottle of tren laying around.

I was anxious and from looks alone I wanted to just purchase it but after the Masteron as SERM thread I would have done this a bit differently especially since this will be a cycle used as mostly sport specific training. However I am now and expecting and can’t really afford to blow money to run this the way I would now with out pissin off the old ball and chain.

So I plan on starting this cycle log by mid next week and keeping a day by day log of my training as well. Hopefully this will cure my summer boredom.

Bench: 405 end of last cycle
Squat: 440 1 rep at the end of squat workout no spotter so never maxed

Couple questions:
Did you mean .5mg of adex eod? .05mg is really low and unconventional.
Did you consider test tapering? Test and Mast are the perfect duo for it.
Do you have a dopamine agonist? I’d get one in hand before Day 1.
Couple comments:
Prop can be run EOD IMO many choose to run it ED though and thats even better.
Ace must be ED IMO for stability of concentration levels within the body. EOD is just too infrequent. If you believe the most aggressive numbers then between 60-70% of your tren ace will be gone 48 hours after inject and you dont wanna deal with that kinda fluctuation.
I think you will like the dbol about 45 minutes pre workout

Finally do you have enough mast and tren to increase those doses? You plan a 350mg weekly test dose and if you really wanna minimize the tren sides you almost need to cut that in half. The good news is cutting your test in half would likely allow you to double your mast and tren with even less sides than the plan you outlined. Supply will dictate your answer of course I understand. But if you desire being strong and fast more tren will get you stronger and less test alongside the tren should minimize the notorious aerobic costs of running tren with higher test levels. I don’t care what anyone says sprints are aerobic and you need to breathe deeply and without compromise.

Otherwise the compound selection is good and honestly my fav 4

yes i did mean .5 not .05mg a day.
I have considered the test tapering but had just never done it before so through it out. I can get the test really really cheap so it is something I could still consider doing.
I was in a bit of a rush when I wrote this and I do have prami on hand still from the last cycle I ran. and I believe I was taking that at .125mg twice a day. tried taking .250 right before bed and didn’t sleep a wink.
Now that I literally just finished reading an old article involving you about site injections I am thinking I will shoot ed rather than ed.
The last cycle that I ran with tren ace and test at an equal dose and never saw any of the negative side effects that I have been reading about when the test is ran at an equal dose with the tren. Yet if I had bought my gear after the Masteron as SERM thread I would have gone that route instead.
I’m excited to see what the d bol does as a pre woorkout supp rather than used in a strict part of my cycle.

As for dosing increases goes. I cant increase the mast and tren without increasing the test. Its a blend which I thought was a good idea at the time. I may have to just get more gear and reduce the blend and add more tren and mast we’ll see what my next paycheck brings. It could be a late addition.

Fair enough but thats the #1 reason I dont like blends lack of changeability. 75mg of tren eod is a pretty moderate amount is all Im saying. If you went to 75mg ed that’s be better but if that jacks your test up to 700mg a week I do think its very likely you’ll encounter sides you maybe havent before. Not every one gets the common tren sides with higher test doses but most people do

Case in case about everyone being different. I’d approach it this way: almost everyone could run 500mg of tren a week with 200mg of test and encounter minimal sides from the tren. Every 50mg or 100mg of test you add the number of guys ok with sides starts dropping. Sure there are guys who can take a G a week of each but that is the exception not the rule 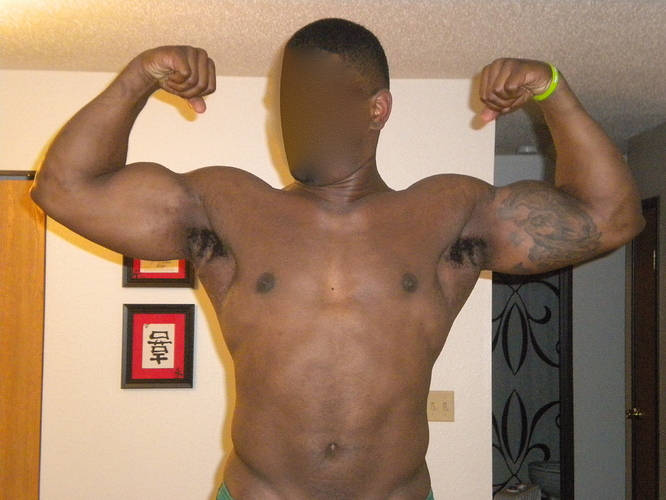 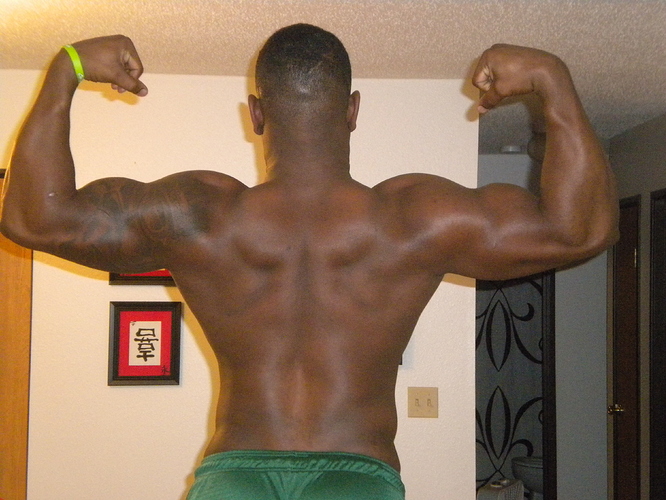 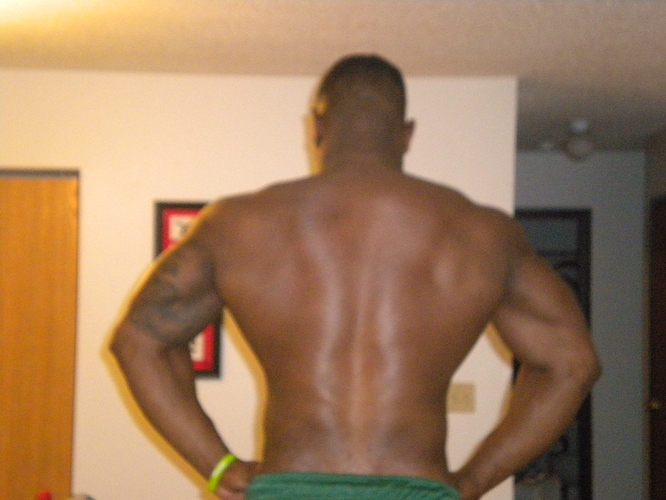 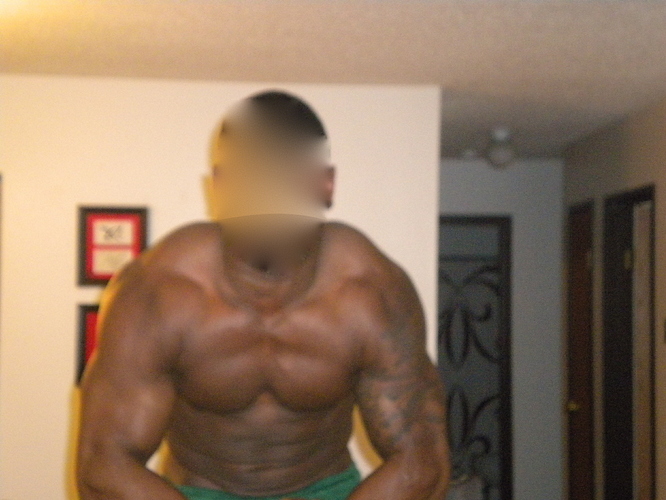 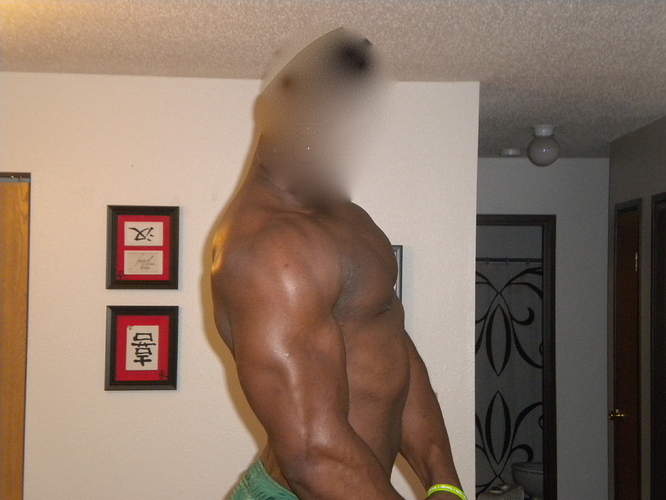 I am on a test/eq/tren/mast cycle at the moment doses go in that order from highest to lowest.

I just added the mast in 6 weeks ago or so and dropped the tren down and feel much better for it. I feel too up and down with just the tren im guessing cause of the acetate ester and dropping levels by nightfall and the mast dropping estrogen levels would have definetly helped too.

Personally, there is no way id use tren ace eod ever.

I dislike it ed even i really dont like the ups and downs and constant indigestion and next cycle…will replace it totally with mast I think and up the eq dose.

This seems to work better for me for some reason for strength. I like tren for fat burning though with a good test dose.

I like the cycle plan and the pics are pretty good. Best of luck with it.

Not sure if you give a shit about my opinion but from looking at your pics you gotta work on your chest…your physique is really good otherwise but the chest is lagging a bit and out of proportion to your arms, shoulders, and back (which are all very good). Not sure if you have ever tried extreme stretching but it has really helped me to bring up my chest a lot…it is still a bit smaller proportionately than my arms and back but it is getting there (once it does I might switch the avatar to a front shot).

I usually do my sets of heavy chest work (usually dumbell presses but sometimes bench press), then an extreme stretch on a flat or slightly inclined bench for as long as I can take it with some dumbells that are just a little heavier than what I would normally use for flyes, and then a few sets of high rep cables and or flyes from a few different angles (if I am using the cables I will set it to the top, middle, and bottom for one set each) to try to really pump the muscle as full of blood as possible once it is stretched out and damaged. It has really helped to give it a more rounded and prominant appearance to help balance out my much larger back/shoulders.

Not sure if you give a shit about my opinion but from looking at your pics you gotta work on your chest…your physique is really good otherwise but the chest is lagging a bit and out of proportion to your arms, shoulders, and back (which are all very good). Not sure if you have ever tried extreme stretching but it has really helped me to bring up my chest a lot…it is still a bit smaller proportionately than my arms and back but it is getting there (once it does I might switch the avatar to a front shot).
[/quote]

Yes I definitely agree. My upper chest is terribly small compared to my lower chest. I’m gonna start with a dumbbell incline press rather than flat first to try and even them up. I have never heard of the extreme stretching before, but that is something that I will have to try. Do you hold it for as long as you can just once or how many sets do you perform of it?

If you’re following the DC protocol, you don’t do sets. What you do is one stretch for as long as possible, usually this is upwards of 30secs. But the idea is to increase the duration/load over time. For example, with the hanging lat stretch, you could use a dipping belt to add more weight, or just hold it for longer.

Well today was my first day of the new cycle. Well I started shooting saturday, 50mg test and 50mg tren ed, but I’ve been out of town all weekend. Todays workout was chest and tris and this was my workout.

Kinda got rushed because of a mix up in what time I was scheduled to run so the last two tri exercises got rushed. So after my workout I had a run with Athletic Republic. Agility day was brutal, the trainer worked me which was good. Tomorrow will most likely be back and bi’s

Today I hit the back and bi’s and it went really well. Shot my tren and test 50/50mg again this morning. the delt does not like the tren. I lifted at 4:15 and took 50mg of d bol around 3:30 and I def felt it today, the forearms were pumped.

Workout was as follows:

Standing plate curl: 2x10 25 lbs - this one is kind of made up, I learned it from a buddy of mine. I perform it curling towards the outside of my arms. Helps to target the outside of the biceps and is a nice burn to the end of the workout.

Tomorrow I will be on the supertreadmill with Athletic Republic so we’ll see whether I do legs or shoulders tomorrow.