Pretty cool study. Obviously the volume went down with shorter periods but, it would make sense that when pressed for time super-sets/antagonist pairing with opposing muscle groups would be better than cutting rest periods which I always did. 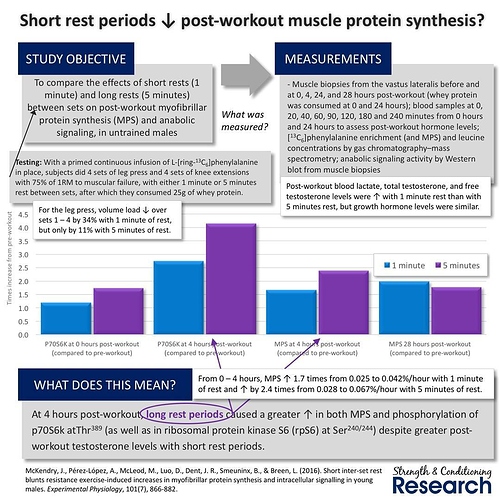 I wonder why they didn’t control for volume-load, keeping it constant between groups. The fact that two variables (volume-load and rest period) differed between groups makes the results difficult to interpret.

Does the decrease in volume load mean that they did less reps at X weight or they decreased the weight?

With intensity, number of sets constant, and rest times constant reps/volume had to drop.

More opinion:
True HIT Bros will be like, “how do you go to failure 4 times? If you really push, you can only go all out once.” And they’ll be mad the scientists didn’t measure rib-cages.

HIT is a fantastic method but rest times for greatest results will vary on an individual specific basis. I train HIT but even vary my own times based upon what works best and when. I have utilized drop sets to run to failure for 5 sets with 30-60 second breaks with great success. Too often I see guys running HIT style thinking they have a patent on what classifies as high intensity. I actually love to bastardize HIT with 5x5, high rep, and push pull variance.

I don’t think I have ran an identical workout in over a year. My biggest downfall previously was falling into a routine that was copy cat every week. Switching up, deloading, reloading, and changing exercises constantly has gotten me much further. Of course, this like all programs is just what works for this particular guy. We are all different.

My biggest downfall previously was falling into a routine that was copy cat every week. Switching up, deloading, reloading, and changing exercises constantly has gotten me much further

Interesting. What sort of change up are we talking? Small tweaks or wholesale changes session-to-session.

I ran HIT with 30-60 second rest periods rotating exercises(6-8 exrcises) and started breaking the monotony with push pull supersets. Eventually I totally morphed. Now I have disciplined myself enough to run what I feel does the most damage. I don’t run HIT but for 4-8 weeks and then I take a two week deload with less sets (6-8) per muscle group.

I never start with the same exercise and they are never in the same order. I have ran a 5x5. Hit style which is possible utilizing drop sets. The past few weeks I have been running two exercises at 5 sets each. Then I finish with two sets of something I like.