My wife was cleaning up our book shelves today and she unearthed a treasure I didn’t remember I had! It’s been a great day looking at these!! 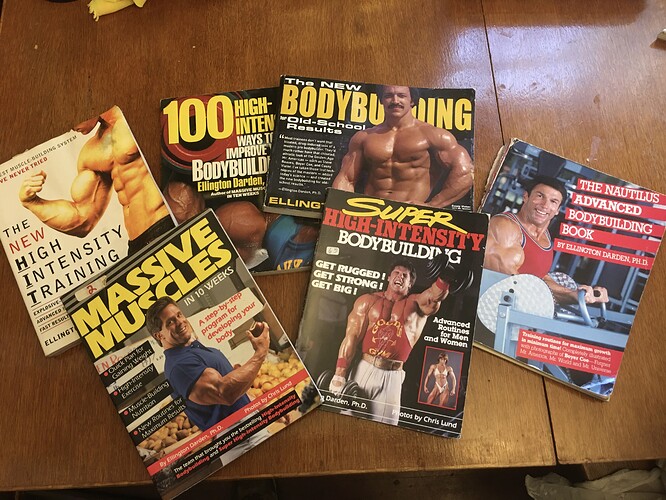 Great! The one I had the most fun putting together is The New Bodybuilding for Old-School Results.

I have all those and more. New BB for Old School results is the best so far though, as far as an amazing read. I highly recommend the print version which is only an extra $5. Amazing quality of print in a sort of coffee table display format, but with miles and miles of interviews, stories and information.

Super high intensity BB and 100 HI ways to improve BB are the first two books I had, which is the most imprinted on by brain.

Yes the New Bodybuilding for old school results is my favorite as well! I just love the cover on Super high intensity Bodybuilding, it looks like the Frankenstein monster lifting weights!!
Scott

I wish that new book was hard bound , I’d buy it in a heart beat, I’m to old school, ha ha!
Scott

Not the Frankenstein Monster. But how about the “Ultimate Warrior” - Jim Hellwig.

I have all of those and The New Bodybuilding is definitely my favourite. Massive Muscles in ten weeks got me back into training back in my twenties after a couple of years of no training.

Wow…now there’s a guy I’d like to hear a story about from Dr. Darden. Didn’t realize Jim Helwig was a Darden HIT guy, or that Darden had ever trained with him. I knew Ultimate Warrior was into bodybuilding first, but I guess I didn’t know he was that “big time” to make the cover of a Darden book!

Dr. Darden would have to correct me if I’m wrong, but I don’t believe Jim Hellwig was a HIT guy or that Dr. Darden ever trained him. Chris Lund was the photographer that did a lot of the photos in a number of Dr. Darden’s books. He also was the photographer for Flex magazine, so he shot a lot of photos of many of the pros and big time guys that trained around them. Those black and white photos that are in some of the books are really great. But there are a lot of photos of guys who weren’t necessarily HIT guys. Yes, that cover shot of Hellwig on the cover and the one of Scott Wilson on the cover of the original "High Intensity Bodybuilding are great shots.

I believe you’re right that he wasn’t necessarily a HIT guy, but if Dr. Darden does happen to have any stories about Jim “Ultimate Warrior” Helwig or if he ever trained him, I’d sure love to hear about it!

I never trained Jim Helwig. Chris Lund took the photo of him and said he was a great guy to work with.

But I did train Scott Wilson multiple times. Scott was just a down-home, very friendly athlete who was super strong.

This reminds me of another bodybuilder perhaps more famous for his life outside bodybuilding. One guy from the golden age that I don’t think I’ve ever read a comment from you about: Ferrigno. Any Lou stories, or any interaction with Lou?

Lou bought some Nautilus machines in 1988 for his home gym. But I never talked with him. Chris Lund took some training photos of him and I used a few in a couple of my books.

I have no stories related to Lou.

I attended the Club Industry show in Chicago, ILL for a number of years. I seem to remember Lou sitting in the Nautilus booth one year. He signed a photo for my wife. Another year it was Rich Gaspari. Also met Lou when I took my son to a comic-con in Detroit. Seemed to be a really nice guy.

I discussed this in another thread, but ‘100 High Intensity Ways…’ was the very first HIT book I bought and read (around late 1991 to early 1992) a bookstore mall. The Legs/Arm emphasis routine truly improved my legs within a month’s time…where as prior lower intensity, high volume did less and made them go stale.

I had all those except the Nautilus book. Massive Muscles in 10 weeks was my first and special one for me. All after reading and trying a routine from Darden in a muscle magazine.

I still have 100 Ways, Old School, New HIT and BIG. I didn’t keep up with Super Slow but was still a favourite. 100 Ways leg emphasis routine to grow the arms AKA Platz was a favourite. I ended combining a leg routine from Massive Muscles with a intense arm routine 21s bi/tris followed by negative chin/dip. The next day I’d feel like crap as I recovered. Not good for recovery that one…but when it worked…it really worked.

New HIT is the best intro to HIT.

I own old school, but I have not read it fully. I should if Darden loves it so much.

I was always excited to get another Darden book. Been following him since I was about 18 or 19. I sold off a bunch of them as I don’t like having too much stuff. But not selling BIG, New HIT, 100 Ways.

Yes, that ‘100 Ways leg emphasis routine to grow the arms’ was brutal! I think it was 14 total exercises which included a lot of compounds. I took each set to utter failure and used an 8/8 cadence taking short rests between each movement. I was only 20 year-old at the time and after 3-4 weeks I was burned out. But no question my legs made good size gains…upper body remained the same.

I also have the same books and enjoy reading them from time to time. Priceless information in everyone!!