Today, in Ancaster, Micropower and I competed in a small, local strongman, strongwoman challenge. I was pretty nervous because I’d never competed in anything since I was a kid. There were only 3 women competing and about 10 men. It was the most fun I’ve had in a long time. I’m attaching some pictures of the fun.

Women was open competion. Men were lightweight under 220 and heavyweight over 220.

Deadlift Medley timed with a maximum allowed time of 90 seconds to complete all three lifts: 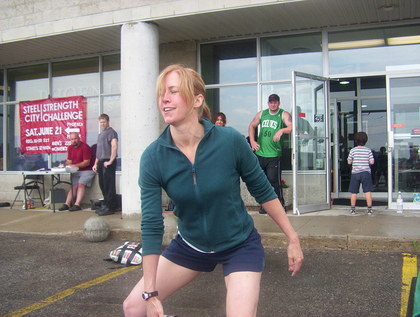 The first medley was the deadlift and all three women completed the lifts in under 20 seconds. We could have gone a lot heavier on the weights with the exception of the rolling thunder. None of us had even seen it before and it was hard as hell expecially if you don’t have big hands. For those that don’t know what it is. It is a handle approx. 2" in diameter that spins with the weight attached. You pick it up one handed. Very tough for me.

Here is me doing it. Too bad you can’t see it

Micropower will be posting pictures too so I hope the picture I took will show it. 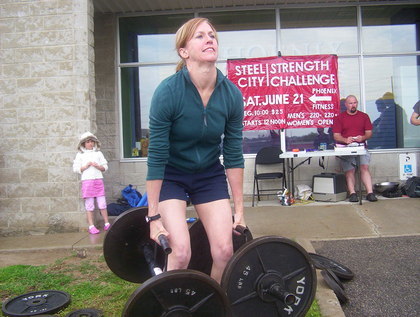 Farmer’s walk deadlift only. This was the first event in the medley. 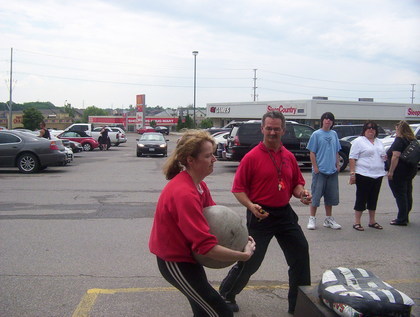 The press medley was the hardest event and couldn’t be completed by all the men or women. I dropped the sandbag before I got it up and there were bad words said.

Here is a picture of Micropower with her tiny 102 lb self lugging her stone. She got 6 reps. I’m willing to bet she was the only one there carrying a stone 25% heavier than her body weight. I would have had to add 30lbs to my stone to be carrying an equivalent ratio. I don’t think I would have gotten 6 reps with that. 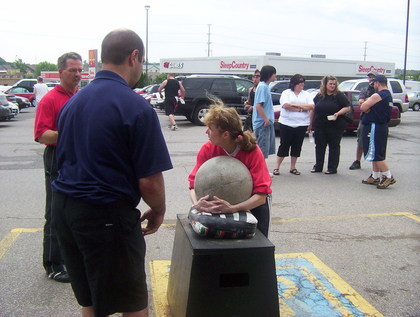 and another. Look at that wee girl go. 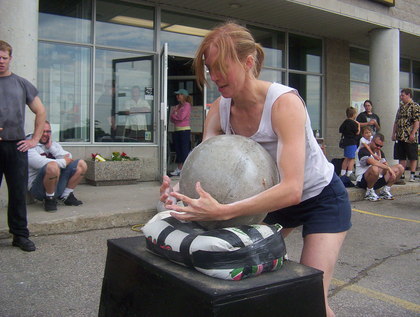 Me and my stone. 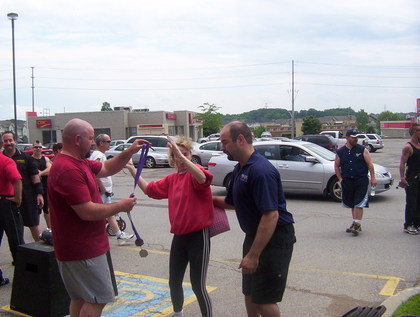 Micro gettin her medal. I’m going to hang mine over my bed

That’s awesome! I’m jealous you guys got to have so much fun.

Was this a spur of the moment type thing?

Was this a spur of the moment type thing?[/quote]

I little bit. A guy I used to train with emailed the information just over a week ago. I asked Micropower if she was up for it and she was.

Total blast. I want to do more. 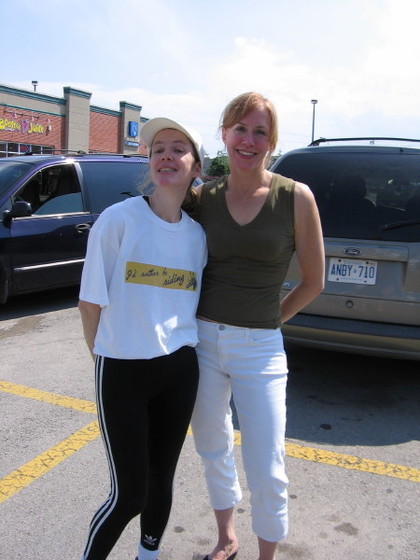 420×560 56.9 KB
Here is a picture of us after the event in the Chapter’s parking lot. I think this woman thought we were going to carjack her when we ran over as she was pulling up to see if she would take our picture. We were turned down by some lady who I’m pretty certain was drunk. Evil witch. I suppose it would have been better if we asked someone before we left the competition.
OctoberGirl June 22, 2008, 2:06am #13

Oh that was very cool. I am so glad you posted pics. The look of triumph on both of your faces is a thousand words.

strongwomen/man competitions are a lot of fun. I bet this won’t be your last.

Is there anyone in your area you can train implements with?

That looks like so much fun. I’m glad you were both able to get together and do something like that. The pictures are great too!

Awesome. I was really happy to see this.

strongwomen/man competitions are a lot of fun. I bet this won’t be your last.

Is there anyone in your area you can train implements with?[/quote]

This was incredible fun for us. There is a big one in August in a town called Woodstock. For the first time there will be a women’s open if there are enough competitors. I’d really like to be in that one. We’ll see.

I’m trying to find something local to train these events. Most of the events and weights planned I could do. Not as easily as today. But I could do it. The only exception is a 400lb tire flip. I’ve never done it so I have no idea of the technique required. However, I never picked an atlas stone up before today and did it pretty easily off the ground before the event. 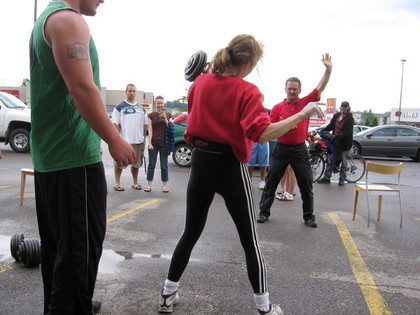 Above pic, micro’s valiant-arghh-but not quite successful attempt to do the first press of that freakin’ press medley (weight belt kindly loaned by ouro)!!

I was hoping to get some pics etc. up here sooner, since this was a joint project with ouro; gotta give my version/corroboration of the Awesome Strong[wo]man Adventure! Ouro would not brag to this extent, but I’m allowed to…about HER, that is!

There may have only been 3 women, but we were all pretty game; Ouro is of course a willowy yet muscled 125ish lb., the gutsy non-member of ‘Team TMagnum, Hamilton branch :)’ was a 20ish/shortish/strongly built/128ish! lbs…and by the time the comp was over, I’m QUITE sure that everyone there (and possibly for miles around?!) had heard my intermittent proclamation that “I’m barely over a hundred pounds!” Woulda been a lot easier to have printed up a T-shirt!!

When all was said and done, ouro was the CLEAR victor; she was the ONLY woman to successfully complete every single task that comprised the women’s event (I TOtally sucked at the overhead presses, as in, “You want me to lift this WHERE??”), and the other gal missed 2 out of 3 presses.

It was nice that the Atlas stone was last, as I was able to revive my somewhat bruised tiny little ego

by staggering around to an acceptable degree! My ‘holding the fort at home’, husband-as well as ouro, above :)-were kind enough to point out that among all those competing, I was the only poor lil thang who had to haul MORE than her own bodyweight (although ouro was just a few bitty few ounces over…shoulda seen that graceful toughy lift it off the GROUND pre-competition; I couldn’t budge the darn thing!).

I think it’s safe to say that ouro is an emerging force on the strong[wo]man front, and I’d like to announce that I am now her agent. Ouro doesn’t know that yet, but I’m sure she will find I’ll be busting my runty butt earning my 80% cut. If anyone else chats with her before I do, please let her know that I have her summer fully booked with competitions! Chop, chop, my leetle moneymaker, er, ouro-girl!

As well as being ouro’s agent, I will also be her Chief Cheerleader. That was my plan for today, but I forgot my pompoms, and everything just went out the window…next thing I knew, I was in some dratted strength medley (excuse me, but when they said medley, I was under the impression it involved FOOD)!

Gotta say that the experience WAS a total blast, despite all that whining and whinging about my [lack of!] size! I’m sure ouro rolled her eyes a few times at my impromtu goofing around, but I guess she’s forgiven me!? Hanging around watching the men compete, and waiting out a slight rain delay was a good opportunity for both members of Team Chicklet to be a bit silly, and have a giggle or two…not at anyone else’s expense :)!

It’s been fun to read the above comments-thanks for the good thoughts! I think I speak for ouro also, in saying that if anyone else has the chance to do a comp like this, or a PL or whatever-even if you’ve never done one before-definitely go for it, you’ll have a laffriot! Oh yeah, and if at all possible, go with a ‘friend in lifting’, especially a cool dudette like ouro! Double the fun, fer sure… 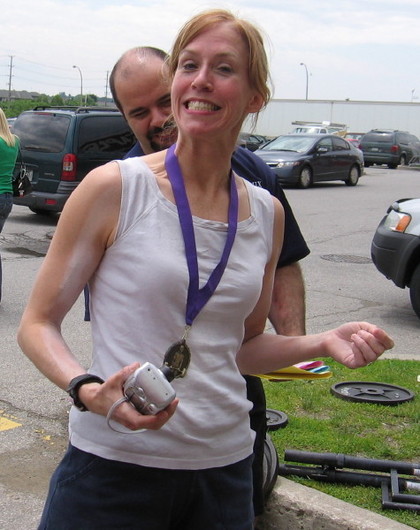 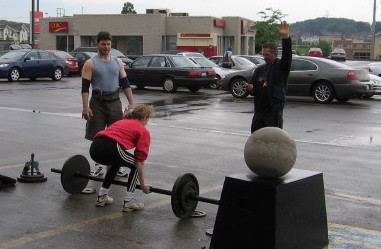 I somehow don’t seem to have as many pics as ouro, although I was aggressive enough in my role as event co-photographer (i.e. body-checked the poor ref more than once in my determination to get a pic!). This one is of micro-moi doing the sorta DL, albeit with that annoying ‘fatbar’!