Starting Out With Knee Wraps

I’m planning on doing an RPS meet in April and I’m considering squatting in wraps since that is an option. I don’t have much experience with knee wraps, I have a 2m pair of Inzer Grippers that I bought a few years ago because I was running a program that had me squatting in wraps now and then as an overload. I used the wraps a few times outside of that but I have issues hitting depth (obviously practice will help) and I would probably be better off with a longer pair. I also hear mixed reviews on the Grippers, but at this point I’m not ready for anything too stiff, and I’m going to be wrapping myself. Any advice?

Current raw (sleeves) squat PR is 480 in a meet, matched that last week in training with no peak and starting to overreach. If I was going to compete this weekend I would plan on hitting about 515. Bodyweight is about 235, I think I will slowly move up to 242 since I’m done with the IPF and I have been at the same weight for the last three years.

Can’t really help you, my last comp was the first time using them myself. Had very little practice with them going in

The only wraps I’ve got any degree of experience with are the red Slingshots (in the 2.5 m length). I dislike wraps, but these definitely deliver extra pounds. They’re reasonably stiff, so you’d want to have a decent amount of practice hitting depth with them prior to meet day. They suit my style of controlled descent, although I imagine if you descend faster they could be problematic and you may find a stretchier, more rebound-y wrap better.

If you’re getting your knees wrapped, make sure you can count on the person doing it to do it how you’re used to on meet day (how many revolutions, direction, etc). If you’re wrapping yourself get some long nose pliers. They’re a game changer.

Also, you probably already know but just in case I find it helps to count revolutions and whether you spiral or cross and when for consistency. That way you can really dial in how cranked your wraps are.

Slingshot or Elitefts Patriots are a damn good middle of the road and easy to self wrap wrap. I squat my first 700 in patriots. As for hitting depth in them you just have to force and ride the pain no other say around it. As for that markos covered the other tips I’d have given.

What meet are you doing. I’m gonna be at an RPS meet in April as well.

What meet are you doing. I’m gonna be at an RPS meet in April as well.

The meet is “Ultimate Confrontation” in Kingston, Ontario, Canada. I’m guessing that’s not the one you’re going to, you’re in the southern US right?

If you’re wrapping yourself get some long nose pliers. They’re a game changer.

How exactly would you use those? I have watched a bunch of videos on wrapping knees and it looks pretty straightforward, but if you have any tips they are appreciated.

Why do so many people hate grippers? Is it because they just aren’t that stiff or is there something else to it? I know that some people like them and they are supposed to give a good rebound, which is what I’m looking for at this point, but I don’t know a whole lot about wraps anyway.

Check this out. Whether you self wrap or get wrapped pliers are an awesome hack. 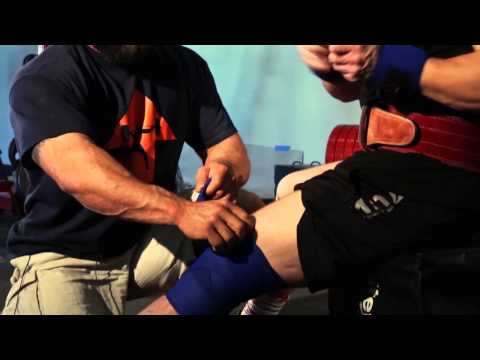 They are yellow for one lol. But for real when I wrap it is with the attempt to crush my knees haha. When the grippers are cranked I get nothing out of them. They just bind up for what ever reason. A ton of stopping power but I get zero pop out them. Which is why I believe 90% of the time you see grippers they are sub elite squatters who don’t crank or need them cranked down or they are on multiply guys who need that stopping powder and rely on their suit or briefs to give them all the rebound. Even in gear i prefer having all the rebound I can get. My hips will lock up with a grand just barely past pararall almost no matter what I have on. So I need and want as much spring as possible from all my gear to give me all the speed I can get. Whether raw or in multiply.

OK, I was under the impression that grippers had a lot of rebound but lacked stopping power, I guess it’s the other way around. For what it’s worth, I found that I got maybe 30lbs. out of them (a 2m pair) without much practice at all but it was impossible to hit depth. I don’t really see why I would want stopping power at this point, mostly I want a big rebound out of the hole. I think I will go ahead and buy the red slingshots.

I like the grippers but I seem to do better with stiffer wraps. I’ve tried 2 or 3 different brands, but they all have that very stiff weave to them.

It’s harder to gauge depth (for me) but my coach is there to give me the up command.

Also, I’ve experienced some balance issues with really tight wraps. Make sure you practice going heavy with them b/c they can throw you off a bit.

Oh, and I got a solid 30 lbs out of wraps coming from tight knee sleeves (elite FTS Super Heavy Duty).

I just got the red Slingshot wraps today, will have to wait until Tuesday to squat in them. I’m going to work up to heavy singles in them (@8rpe or so), I don’t see the point of lighter work in wraps

Oh, and I got a solid 30 lbs out of wraps coming from tight knee sleeves (elite FTS Super Heavy Duty).

Are those allowed in competition in any feds?

Yeah, I think many of the feds allow sleeves now in classic raw. In RPS though, they consider sleeves the same as wraps in modern raw. Since I’ve been lifting in RPS, I moved to wraps.

I train 90%+ of my time in sleeves, and wraps only leading into a competition for the last 4 weeks or so as we really start loading the bar heavy and reduce volume.

I was asking because there are knee sleeves out there that add a lot to your squat but aren’t allowed in most (or any) federations. I think it’s strengthshop that makes doubly ply and triple ply sleeves, and Inzer has adjustable sleeves with straps on them.

I don’t know. What I do know is that the heavy duty elite FTS sleeve was available for use at my gym, and I liked them so bought a pair and competed in them once in RPS

Then I moved to wraps. There is a world of difference between wraps and the sleeves I’ve been using. Like 30 lbs.