I’ve looked around and I can’t find too much information so either I’m using the wrong search or it’s hard to find.

Does anyone know a ballpark relationship between straight bar squat max and SSB max? I’ve heard SSB is generally 85% of straight bar but in my case I very much doubt it simply because last week I hit 506 lbs for two wrapped straight bar and today 506 lbs for one wrapped SSB. Same RPE (9-10). I find I can generally do fewer reps of a given weight SSB vs straight (7 straight, 4 SSB at 440 lbs wrapped) but for a single there doesn’t seem to be a huge difference.

Anyway, I’m not just idly interested. Straight bar squatting aggravates my biceps tendinitis so SSB is a lifesaver. Coming close to a meet it’d help to have feedback from others who’ve used the SSB a bunch to get a slightly more accurate idea of how the two compare. I’m guessing my SSB is maybe 95% of my straight bar, maybe 90% at a pinch.

I would say it depends on the person. Some people can cheat the SSB by pulling down on the handles or pushing up which changes the squat mechanics.

Video would help a ton here. 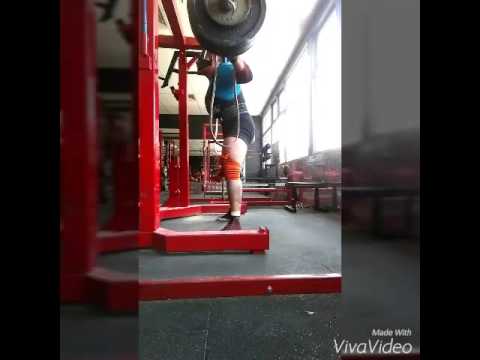 It looks to me like when on the SSB your decent is generally slower. The faster decent = better rebound with the wraps which would make sense if you were seeing much higher with the straight bar.

It does appear you might be pulling down on the handles which in my experience make it easier to grind out weights on the SSB.

So while you might be seeing 95% it could just be because you’re better able to grind through a sticking point than you could with a straight bar. I feel like your elbow position is a bit chicken winged which would make my tend to think you’re able to grind out better with the SSB.

Either way if YOU personally can determine what works for you with the SSB > straight bar then go off that.

Yes, my elbows are an ongoing pain in the backside (and elbow). I somehow need to figure out how to get them under bar and into my sides while being able to pull the bar hard down into my back and not wreck my elbows in the process. This is a work in progress. Next cycle I may experiment with a much wider grip and see what that does for me.

I’d say mine is about the same ratio. My straight bar is at 675 but my SSB is at 620.
https://www.instagram.com/p/BCGqUTEJHaV/?taken-by=neversate

Can you have someone take a photo of you from the back while you’re setup under the bar?

@corstijeir I can most probably arrange that. I’ll see what I can come up with.

Nice! Thanks for that, useful to know. I figure the more I use the SSB the better an idea I’ll get. Plus, I figure a safe bet is that anything I can hit on the SSB I know I can hit more easily on the straight bar, whether it is a max single or a given weight for reps.

Your squat is fairly upright, so this shouldn’t be surprising.

You may also want to consider a buffalo bar.

Out of curiosity, do you squat more than you pull?

I would LOVE a buffalo bar but I don’t see myself getting access to one any time soon.

No, I pull more than I squat. My max DL is 572 but I’ve never squatted above 506. I think my max wrapped squat would be sitting around 528, my unwrapped max probably around 464 (but those are just estimates).

Allot of the SSB’s are cambered at a different degrees, so i’m not sure that even if you did find any info online it would do you any good anyways. I got mine for the same reason and it has more than paid for itself in relief. I use it about 2/3 of the time or more and it doesn’t feel like it’s too much of a difference in terms of 1rm. The SSB feels like a little more of a grind and switching to straight bar feels a hair lighter and takes the instability out of the picture that you get with SSB’s. I always push up on the handles on the ascent to cue driving with the upper back, staying tight and straight. This carries over very well, when switching to straight bar. I program the SSB with the same %'s as I do straight bar and really only throw in the straight bar to break up the monotony and stave off repetitive strain or I wouldn’t ever look back.

That ball makes sense. Your approach is pretty much what I’m planning on. For some reason my gym’s SSB doesn’t have handles so I just hang on to the pads and pull down. It seems to work OK.

I was under the impression that SSBs are 75lb. The one at my gym is.

I was under the impression that SSBs are 75lb. The one at my gym is.

That sounds about right.

Depends on the company. Mine is 65lbs.

My parallel SSB squat is about the 85% of my strongest parallel squat. I use a wide stance while sitting back a good bit while the SSB makes that hard to do because it wants to pull me over if I have much lean. This forces me to try to squat more upright which makes me use my quads and upper back more which are less developed.