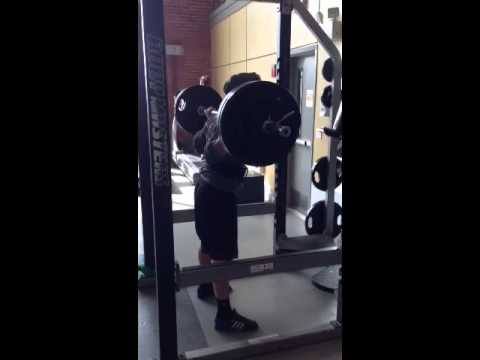 thanks for any help you can give me

Squats look really good to me. Camera angle is shitty so it was hard to see how deep you were going… looked like you were either just at/above/below parallel, so Im guessing depth isn’t really a problem, but maybe one or two of those could have been a touch high. If you want me to nitpick, I think you could do a little bit of a better job keeping your chest up as you go down.

You want to descend fast, so on a couple reps it looks like you kind of rush the start of the squat, pushing your hips back and letting your chest come forwards just a tiny bit - then when you hit the bottom, you end up with your hips rising a little faster than your chest, and the bar a little more forward than ideal. But it’s not a big deal at all, just the biggest critique I could come up with haha. Maybe try and keep everything the exact same as you initiate, just actively think about keeping your torso in the exact same position and not letting it dip. Overall though, those look great.

Same for the deadlift. Really really nice form overall. I like where the bar starts in relation to your shins - I also pull with the bar a little further away, so I have to push my shins a bit more forward at the start of the rep. I find it gives me the best combination of strength and speed off of the floor and to lockout. Your reps all look clean, fast, form is consistent. The two critiques I have are matters of opinion more than anything: 1) I would try and play around with a more dynamic start to your deadlift.

You are holding that bottom position just long enough that you are probably losing some strength and explosiveness off the floor. Watch the way that eric lillibridge, pete rubish, mike turscherer deadlift. Each one has his own unique way of staying out of the static, bottom position for very long - either by pumping the legs, rolling the bar, “gripping it and ripping it,” whatever. Obviously you need to figure out a way to do it without your technique sufferring, but I can say that personally, since playing around with a faster setup/initiation of the pull, I have seen my deadlift improve a LOT.

and 2) I wouldn’t be using a belt if I were you. I know this is widely debated and just my opinion, but lifts like squat and deadlift rely so heavily on core strength… and one of the best ways to develop core strength is fighting to keep your back flat on heavy squats and deadlifts! Again, this is a change I have made in my programming - core strength was a weakness of mine, so I stopped using my belt entirely, save for 1rm attempts.

My back and abs have gotten so much stronger, I can now pull my old 1rm belted deadlift with a perfectly flat back for reps without the belt, and I KNOW that when I do a meet I could hit PR’s without the belt - so, when I throw the belt on at last, it is going to mean at least an extra 30 lbs on my lifts. A lot of people might disagree, but I think at your strength and experience level, ditching the belt for 99% of your training would probably make your far stronger and more well-rounded in the long run.

Again, overall great on everything, I’m just picking at the little things. Keep working hard, your form is pretty much locked in - all you need is time and hard work and you’ll be a monster. Keep at it

I’m going to agree with N.K. - I like going belt less as well. Your dead lift form looks good. You are snapping your hips through without hyper extending the back (hip hinging) VERY well. The weights looked way to easy to spot any breakdown in form, but looking good…

[quote]bilski wrote:
I’m going to agree with N.K. - I like going belt less as well. Your dead lift form looks good. You are snapping your hips through without hyper extending the back (hip hinging) VERY well. The weights looked way to easy to spot any breakdown in form, but looking good… [/quote]

I’ve been using the belt because I have a herniated disk and just try to be careful. leave it off for warmups and front squats etc and do a bunch of abs in my warmup. Tried to sit back more, keep chest up what do you guys think?
295 x 5
squat 295 x5 - YouTube
first squat might have been high, and i think my feet were at slightly different angles.

Looks solid. Hard to tell from the back, but when the camera moved to the side it looked like you were keeping your chest up pretty well. Just keep at it, seems like you are getting strong fast.

[quote]N.K. wrote:
Looks solid. Hard to tell from the back, but when the camera moved to the side it looked like you were keeping your chest up pretty well. Just keep at it, seems like you are getting strong fast. [/quote]

great thanks. I do feel like the bar tends to get a little forward on me and then want to fold me in half. any suggestions on maintaining a straighter bar path?

Getting your core stronger will help keep everything more upright. Obviously that should be a priority with you anyways because of you herniated disk, you want to forge a core of steel to keep that back healthy. Also, trying to sit your ass straight down in between your feet can be a useful cue. When you sit back, the natural tendency is for your chest to come forward to compensate. But if you really work on jacking your knees out and sitting your ass right between your feet, that can help.