In my endurance life there is a time and place for energy drinks and energy supplements.

Believe it or not, there are certain workouts I use energy supplements for and others I do not.

The original Spike was introduced and I was a little timid. A few months later the first bottle was on my shelf. I liked it, and I was able to stick with 1-2 depending on what I was doing, and what I needed it for.

Sprint and Threshold Training I started with 1 to assess tolerance, but quickly moved to 2. The kick it gave me was similar to that gorgeous muscle car spinning tires waiting for the rubber to stick and launch off the line.

The second generation Spike was released in its quick release beauty, easy to carry around form. This was a much smoother cleaner improvement, and allowed me to utilize Spike during my competitions as the benefits were more consistent and apparent. With one tab, the results were more retrospective, with two tabs I could feel myself surging in my training and racing.

Next game the third generation, probably the most enjoyable of the new Spike family. The caffiene-free version allows me to take it for most of my training with the ability to toss in 1 of the box Spike for a real nice kick or just sit with the box Spike alone for quick energy.

I am a big fan of the 1 Caffiene-Free 1 Regular Spike combo. It gives you a kick in the ass and lets you cruise at a high pace.

Now… Biotest comes out with this liquid energy drink. Spike Shooter. Could this possibly ruin my entire set up!!!

So in protest of Biotest’s shinanigans, I ordered myself 4 cases of the Spike Shooter. Why? Because I have plenty of people that love ye’ol Red Bull Vodka combination, and others who drink Red Bull straight. I’ve enjoyed a few Red Bulls so I’d rather have a stash of something I trust.

Eitherway… I am now starting a thread dedicated to my review of the Spike Shooter. I will be giving this a shot in many many settings, given that I have a ton of cans, I will take suggestions as well.

It might take a few weeks to cover all this ground, but I hope to cover it all. 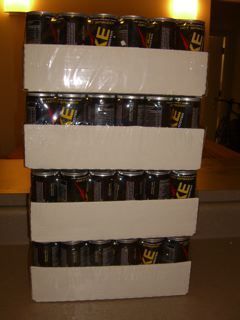 Following the instructions on the can, I have consumed half the beverage, about 10 minutes ago.

I actually started drinking around the time I started the original post on the thread.

The feeling is different than Spike when it first starts to kick in, and I get the sensation of more full-body energy. When I take a tablet of Spike I always feel the smooth focus and energy, but I notice the big energy difference when I start doing something or after doing something.

With the Spike Shooter, I am sitting here typing and I feel energized even down to my fingers and toes. It is a very clean feeling, not like you’d get with NoDoz or similar. I honestly, don’t get a reaction with Red Bull, but this is definitely a kick.

I honestly have the urge to go out and ride 100 miles right now.

As far as taste… Very hard to describe. It reminds me of a carbonated… jello almost. But not so much overwhelming it just has that same reminder of jello. It’s very good and not something over powering, its like raspberry / strawberry jello with a hint of citrus and carbonation.

I could see how this would go well with vodka, or, for the ladies, as a little kick to your cosmopolitan.

That leads me to an idea… as the weekends pass I will throw in successful drink recipes that people have thrown in.

BTW. If you plan on ordering 4 cases of Spike Shooter, the package comes out to a whopping 63 lbs. I am assuming most of the weight came from the free Metabolic Drive bars, but still.

The first review was with the can at room temperature, something that is usually pretty nasty for any carbonated beverage.

Spike Shooter performed well and was actually quite enjoyable at room temp. I’ll be sure to give another review with the can chilled.

A few hours later things are feeling smooth and very productive. Overall a better feeling than using Red Bull or other similar products.

The drink is more Spike-esque than Red Bull-esque, but definitely beats Red Bull.

I too am loving the Spike Shooter!

I love your thread!
Thank you very much!
What a different attitude from the average whiny Biotest customer. True elegance. I will be following this closely.

Very interested in your interval swimming comments. I used to be a 100m and 200m buttterfly swimmer.

I noticed the T-Max ingredient is not on the label of the drink. Do you know if the main ingredient :

is part of the drink formula?

[quote]Alpha F wrote:
I love your thread!
Thank you very much!
What a different attitude from the average whiny Biotest customer. True elegance. I will be following this closely.

Very interested in your interval swimming comments. I used to be a 100m and 200m buttterfly swimmer.

I noticed the T-Max ingredient is not on the label of the drink. Do you know if the main ingredient :

is part of the drink formula?

AF,
Honestly I have no idea about the ingredients, so far my experience today has been extremely positive. I did notice when I came off of the drink, which is right around now (6 hours later). There isn’t a crash but you notice that your focus is back to baseline.

I honestly was expecting a crash so I am plesantly surprised to not have had one.

Not much to add, since I haven’t tried it yet, but I wanted to at least let you know that others are reading your reviews and I’m keeping track of this post.

I’ll be buying some with my next Biotest order, probably in 2 weeks or so (I have a feeling I’ll miss the free bars though).

I just got my Spike Shooters yesterday. I threw caution to the wind and downed the whole can right before my workout.

It tastes amazing. Like nothing I’ve ever had for sure. Other than that it’s quite a bit more potent than any energy drink I’ve had to date. Makes Red Bull seem tame.

Overall: It will be a staple in my kitchen.

Finish with Spike Shooter and a drop of grenadine in the middle of the glass.

Good thread Mr. Boyle. I have been using the new Spike Shooter for a few days now and I like it a lot! One of the things that really turned me off about the energy drinks and Red Bull comes to mind was the high sugar content.

Might as well crack open a Mountain Dew I thought. But, with the Spike Shooter it’s not just a sugar drenched soda with a few vitamins thrown in to disguise it as an energy drink. It really is a healthy energy enhancer that tastes great.

That one was for the ladies

Stimulant use like this is why I get 8,796 emails from Jon each day.

I have no idea what your association is with Biotest etc… but do you know if this can be purchased in DC? Are there plans for this to become available in stores other than GNC?

If anyone knows that it would be appreciated.

Another thing you can do is let the fizz out and mix it with one scoop of protein powder.

Did any of you ever accidently get a taste of the T-max liquid in the original Spike capsules? If the Biotest flavor engineers managed to make anything tasting like that taste even tolerable then hats off to them.

[quote]etaco wrote:
Did any of you ever accidently get a taste of the T-max liquid in the original Spike capsules? If the Biotest flavor engineers managed to make anything tasting like that taste even tolerable then hats off to them.[/quote]

In all honesty, I will be buying the drinks instead of the pills from now on because the effect is that much different to me. You feel it faster and the effect is more noticeable.

I haven’t drunk one early in the day so I couldn’t speak on how long the overall effect really lasts. However, the flavor is not what I was expecting…which was pretty much what you mentioned.