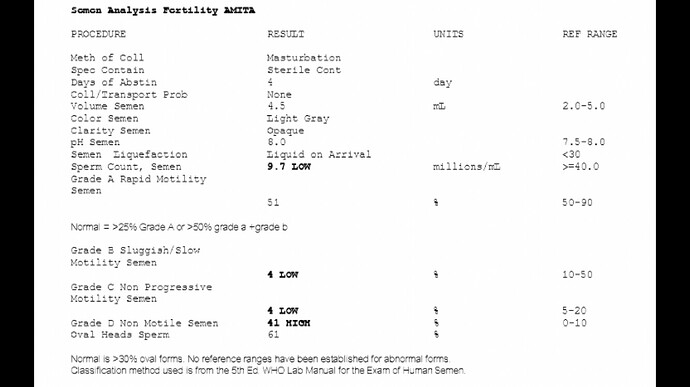 Can someone take a look and tell me their thoughts about these results. Attempting to regain fertility while on trt. This is after 9 months of 3000iu hcg 80mg test weekly. I really don’t want to stop T but also getting impatient. 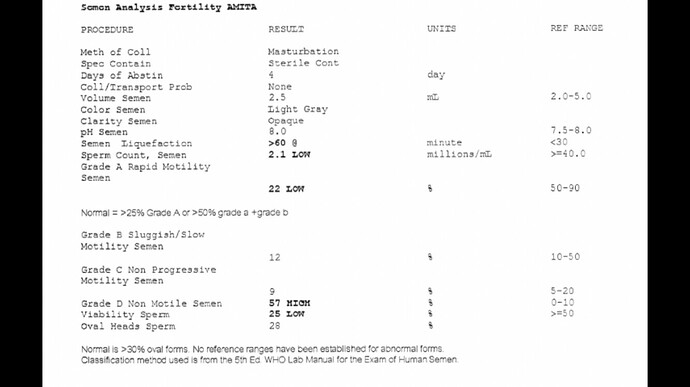 This was after 4 months on the protocol. Also taking 25mg clomid daily

If you could get your hands on FSH, your sperm results will likely be a lot better. After all the FSH is what stimulates sperm production. 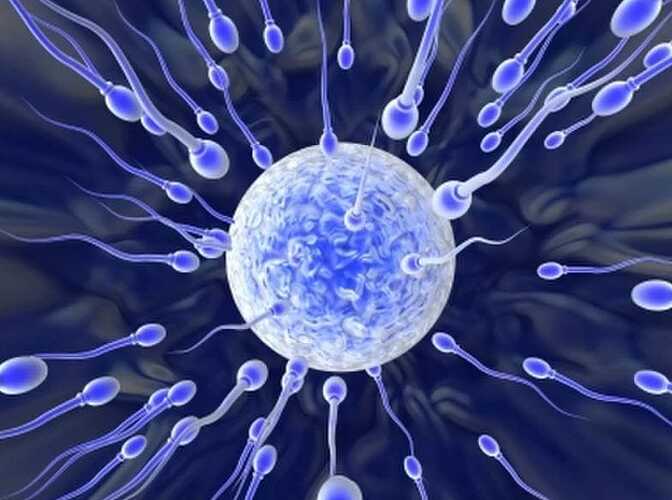 Semen analysis results after adding FSH to TRT and hCG

So after 6 months of adding FSH to my TRT protocol I got a sperm analysis done.
A quick background. My fertility was normal before TRT and went to zero when I started TRT without HCG.

Adding HCG 500 IU 2x a week my [sperm]analysis results were:

Subfertile with not great chances of getting my wife pregnant.

I tried to increase HCG to 500IU 3x a week but results were basically the same and it didnt make me feel good. So I asked Dr Saya if I could try FSH and he was ok with that. I have been taking 50IU 2x a week (less than the dosage prescribed… long story short my wife got pregnant and miscarried and we decided to hold off on another baby so i decided to use a much lower dosage just to save money and see if it would work).

I am fertilile again! Thanks Dr Saya! The small FSH dosage worked!
So I am planning to keep using FSH in my protocol.

My urologist thinks I’m on the right track and does not want to go with FSH but I’m gonna politely demanded at my follow up. Also just wants us to do IVF or IUI… but we really don’t want twins lol

Your best chances at fertility and your doctor is like, no. Your subfertile, what an idiot!

Yup. He’s also supposed to be the best fertility doctor in the area!

Just curious by why does he only have you on 3000IU of HCG a week?

I was on TRT of 250mgs of test cyp a week and 2000IUs EOD of HCG. This was after years of bodybuilding and fairly heavy AA use. My sperm count was nonexistent. Once I started HCG - my wife was pregnant within 2-3 weeks both times like clockwork.

This was the protocol put in place by the best fertility doc in my area.

We’re you taking any other types of supplements for fertility in conjunction with the hCG?

If you could get your hands on FSH, your sperm results will likely be a lot better. After all the FSH is what stimulates sperm production.

HMG is likely cheaper to get. Here is a description. I agree with your post BTW. Just thought I’d throw out another option that may be less costly on the wallet, and I think may be a bit better than just FSH, as having some intratesticular testosterone is beneficial to sperm production (which you get from the LH in the HMG).

LH stimulates Testosterone production, FSH sperm production. You get both with one product.

Basically HMG is like taking HCG and FSH, but you are getting LH instead of HCG (which LH is what the male body actually uses, and HCG mimics).

I think may be a bit better than just FSH, as having some intratesticular testosterone is beneficial to sperm production (which you get from the LH in the HMG).

Madman on Excelmale has stated the HCG and FSH is better than HMG route and he rarely is wrong about these things. This guy’s a guru in the hormone world.

Having experience with your same issue, here are my thoughts: the more Testosterone you inject the less LH/FSH activity there will be.
If the pituitary does not receive the signal to produce LH/FSH from the brain because there is already enough Testosterone in the bloodstream the testes will not make sperm.
The huge amount of HCG you are injecting is desensitizing the leydig cells causing no production of sperm, as the body doesn’t have a " need" for it.
Stop HCG for 7 days, and then inject 250iu EOD for three weeks and then get tested again.

Not everybody is the same…your body is fine using 3000iu per week, and historically speaking, dosages that high are usually mo.re harmful than good.
The protocol the OP is using isn’t working, so tryig something different cannot hurt.

3000iu per week, and historically speaking, dosages that high are usually mo.re harmful than good.

I used up to 10,000 IU per week for a try at HCG mono therapy without T, as prescribed by my doctor. That’s an option too. Or clomid.

I’ve been doing 500 ED. I’m thinking I’ll try 6000 weekly and if that doesn’t improve, drop it down and see how it goes. Hopefully I’ll get FSH at my next visit.

are usually mo.re harmful than good.

I think this is a myth I too once believed. In what way is it harmful?

Are you seeing a doctor?