What do you all think of this? Looks like it would be a great way to cook chicken but I’m a bit worried about the xenoestrogens in the plastic bag it would be cooked in.

I’ve read all about this because I’m a big foodie. I’m also not keen on the idea of cooking in plastic, but the temperatures are really low. For example, a ribeye gets cooked in 140-degree water for a fairly long time.

I thought the method might be really nice for fish. So I tried a homemade sous vide using ziploc bags and an enameled cast iron Dutch oven. Used a remote thermometer to monitor temperature. I could NOT maintain the low temperature on the stovetop. Had better success in the oven, where I have a big thick pizza stone helping to keep the temp stable. Nonetheless, the temp went too high at times. The resulting salmon was no different than a piece of poached salmon. I much prefer the taste and texture of just grilling or searing the outside, then cooking the center to medium rare. A disadvantage of sous vide by itself is no browning. And browning = flavor.

I would have to try the real thing at a restaurant or maybe my local Sur la Table before passing judgment. But my cooking techniques already achieve the main advantage I see of sous vide, which is NOT OVERCOOKING meats.

In restaurants, sous vide is the first stage of a 3-stage method of preparation. Meats are slowly brought to the ideal temp using sous vide. Then they are usually chilled and held. Finally, they are seared and sauced before serving.

So I experimented with that general method but substituted low-temp baking and indirect grilling instead of sous vide to bring the meats to the ideal internal temp. I have found that steaks ARE more succulent when cooked with the 3-stage method. I used this method to prepare ribeye shish kebabs for a party. First, I dry-aged the steaks in my refrigerator. A couple days before the party, I cooked the interiors: I first salted them 60 minutes before cooking, then baked them on a wire rack in a 300-degree oven to slowly bring the internal temp up to 125. I used a remote thermometer in the smallest, thinnest steak to monitor temp, and then checked each one with a Thermapen. Then I chilled them. Then I cut them into shish kebab cubes. Just before serving at the party, I fired up my grill as hot as possible, threw some soaked mesquite into the smoking pan, and seared the kebabs on 4 sides. Finished by sprinkling with Maldon smoked sea salt. This was seriously some of the best beef I have ever tasted (and I’ve been to lots of expensive steakhouses).

I did over 20 experiments cooking ribeye before settling on the above method. The slow precooking, then rest/chilling before final searing, DOES produce THE most succulent meat.

It was really interesting to me to read about the experiments the sous vide gastronomes have done with each type and cut of meat to see what happens to it at different internal temperatures. The proteins denature during cooking, and there are certain thresholds where big changes occur. I already knew this just from my own cooking experience, but it was interesting to see more detail of what’s happening. For example (if I remember correctly), a ribeye steak reaches some denaturing threshold at 130-something degrees. That denaturing changes the texture from “raw” to “rare.” It also reaches some other major threshold at 150 or 160 something, where the protein strands tighten and squeeze nearly all the water molecules out. In other words, the shoe leather stage.

I was thinking trying this: 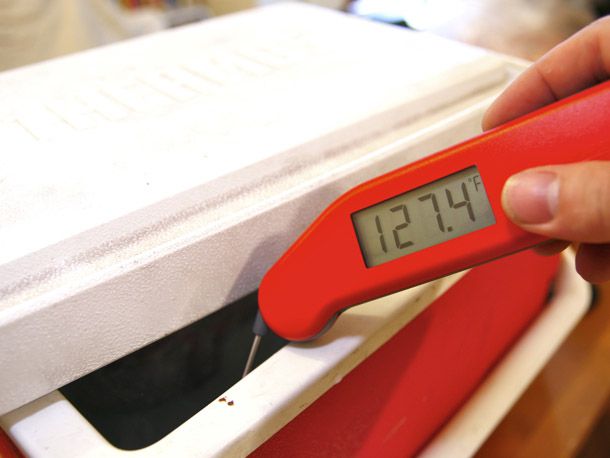 Cook Your Meat in a Beer Cooler: The World's Best (and Cheapest) Sous Vide Hack

By this point, there is absolutely no question that the method of cooking foods at precise low-temperatures in vacuum-sealed pouches (commonly referred to as "sous-vide") has revolutionized fine-dining kitchens around the world. But the question of...

I was thinking about trying it with chicken and then finishing it in a pan. I have a problem with chicken drying out when I cook it on the stovetop. Your method of cooking it on a low temperature in the oven and then refrigerating them sounds interesting. After you chill your meats and sear them is that enough to warm them up? I was thinking about cooking a few days of chicken breasts your way and throwing them in the pan for a few minutes when its time to eat. Unfortunately with the cheap steak I buy I dont really think its worth going through the time for them.

Must say I’ve seen some sous vide hacks, but not that one before.

And for the record, I can cook steak as evenly as those pictured using the 3-stage technique, and almost that evenly (slightly thicker outer crust) using indirect grilling if I pay careful attention.

For my shish kebab, yes, searing the outside was enough to warm the interior but not overcook them. My grill gets really hot though, around 800 at the thermometer which is 8-10" above the grate.

Cook’s recent recipe/method cooked chicken breasts slowly in a low oven, then finished by searing. I haven’t tried it myself because I don’t want to spend that time and trouble on chicken breasts. For a great steak, yes. For chicken, no.

That said, if your chicken is dry, it’s because you are overcooking it, as most people do.

Here’s how I make chicken. I buy frozen Kirkland Signature ice glazed chicken tenderloins at Costco. They are already brined in a salt water solution. (If you buy unbrined chicken, brining will greatly improve its juiciness. If you buy chicken breasts, trim off the tenderloin and cook it separately, then slice the breast in half vertically, and pound it if necessary to be evenly thin all over.)

Thaw in the refrigerator (or at room temp if in a hurry, never in the microwave though).

Preheat oven to 425 or so, with a rack set near the top broiler.

Pat the tenderloins dry with paper towels. I brush on a small amount of EVOO, then sprinkle and pat on good quality grated parmesan/romano (not Kraft) on both top and bottom, set them on a wire rack in a large baking sheet (lined with foil for easy cleanup), then sprinkle on sea salt, fresh ground black pepper, and thyme.

Place the pan in oven, and turn the broiler on. Check the parmesan crust every minute or so, because every broiler is vastly different, and you’ll have to learn how long it takes to nicely brown it. After 3 minutes or so, check internal temp. If the crust browns before the inside is done, turn off the broiler, and set the pan on the bottom rack till the internal temp reaches 160-165.

(If the internal temp is reached before the crust is browned, take them out of the oven anyway or else they will dry out. They won’t be as tasty without the browned crust. Place the next batch closer to the broiler if possible. If not, reduce the oven temp so that it takes longer to cook the interior.)

Do not use a leave-in-the-oven type thermometer; they are no good. The Thermapen is awesome and a much more versatile investment than sous vide equipment.

It’s hard to get good results IMO cooking boneless skinless chicken breast on the stovetop or grill. The exterior gets leathery. (If the interior is dry, though, you overcooked it. Don’t cook it so long.) I dislike the leathery exterior. It helps to coat the chicken lightly with seasoned flour, then pan fry it in some oil. But the broiled parmesan crusted is so much better and is just as quick to make once you get used to the procedure.

BTW, the thermometer shown in the pic at the top of your link is a Super-fast Thermapen, one of the best tools for cooking I have ever bought. Worth every penny.