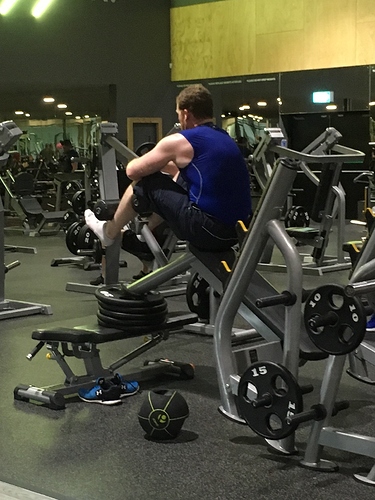 It’s called a roman chair… not sure how safe his custom job is though (cant really make out what’s happening - has he set it up in another machine?)

But that looks a bit unstable even for my own taste!

Yep, he’s dumb. When you get too much decline you start to use way too much hip flexor. Occasionally I’ll set the decline too steep and my abs stop doing what I want them to do as soon as my shoulders leave the bench.

A slight decline works wonders though.

Really not cool to just take photos of people and post them online without their permission, don’t you think?

Why not just ask the guy instead?

You joined this site to ask something stupid?

My take is the guy behind the camera is just stupid.

It would be easier to see if you used a flash, then it would have the added bonus of testing stability while startling the guy.

a couple sides to this. one is what pwnisher mentioned.

The more productive thing to do here, rather than sharing on the internet for lulz, would have been to tell the gym owner. If this was my gym, the guy would be either warned or banned from the gym. That’s a ridiculous use of the equipment. My specific concerns would be damaging the bench/padding under those plates, and then beyond that, the liability issue.

Who fucking cares? The picture doesn’t show the guys face.

I do. I apologize; I felt that part was obvious.

until he doesn´t get injured , it´s okay

Why do you care that he cares that the OP cares enough to post a picture of a guy who doesn’t care if the decline cares if his abs care if they work or not?