I recently had shoulder surgery on 6-1-17. I had an open bankart repair done on right shoulder. My shoulder bone “glenoid” was fractured during dislocation of my shoulder in an accident. My doctor said I must have surgery or suffer chronic instability and possibly dislocate shoulder again a lot easier due to this. He too broken bone fragment and put two screws in to secure it back in place. Since then I have not been able to get any flex out of my bicep at all it’s just limp all the time even when I pick up something and forearm has numbness in it but doc said that’s from being in sling. Does all of this sound normal?? I’ve never had any surgery just hoping he didn’t screw anything up, any info would be greatly appreciated! Thanks.

How well does your area of forearm numbness match up to this pic? 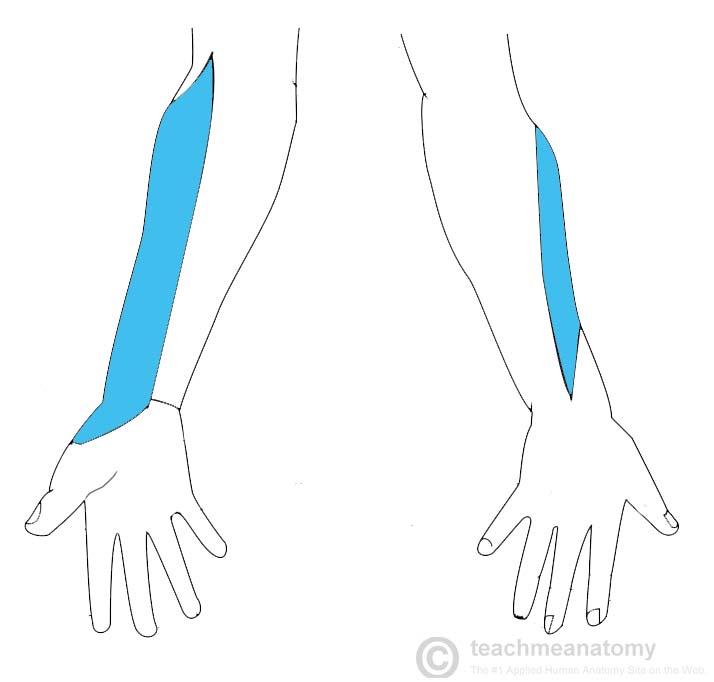 Perfectly that’s exactly where it is numb

OK, let me start by saying that I’m a doctor, but I’m not your doctor. So nothing that I write should be considered medical advice. (Not trying to be a jerk; just making clear that I’m not establishing a doctor-pt relationship with you. Sometimes folks get the wrong impression when a doctor gives them feedback over the internet.)

Based on what you’ve written, it’s impossible to know whether this injury was precipitated by the original trauma, the surgery itself (nerve damage is a known complication of shoulder procedures), or just prolonged post-op positioning (ie, being in a sling for a long time).

What would I do if it were me? I’d make sure to keep an open line of communication with my doctor. If he’s right about it being sling-related, the strength and sensation should improve with time. If improvement didn’t occur in a timely fashion, I’d ask him to consider whether I might have sustained a nerve injury at the time of surgery, and what if anything could be done to treat it. I would be nonconfrontational and matter-of-fact (because I know he’s less likely to become defensive if I don’t appear to be on the offensive). If I felt he was stonewalling me or being less-than-upfront, I would get a second opinion from a neurologist (as they can do special testing to determine whether a nerve is intact).

Best of luck. Keep us posted.

Thanks for info and after the accident I had no symptoms of this numbness or loss of bicep only after surgery did this occur. I guess when I get out of sling in 4 more weeks I’ll be able to tell weather it was from that or got messed up during surgery.

Update. I was referred to a neurologist and he did a nerve conduction study,EMG,etc. And I have sustained an injury to my musculocutaneous nerve. He said the nerve passes through right where my surgical wound is and was most likely caused by surgery. What I wanna know now is how am I going to find out what type of injury has happened to the nerve? Was it stretched or severed? This has caused me a ton of muscle atrophy in my bicep and numbness in my forearm. It is painful sometimes picking up things cause when I bend my arm my forearm is doing most of the work. My bicep is starting to contract just a little bit and therapist is making me wear a stimulator on my bicep during P.T which I think is a good thing? I am just hoping that this is something that will heal itself and not require another operation such as nerve graph or whatever. Anymore info would be appreciated. Now 11 weeks post op.

What did your neurologist say regarding treatment options/recommendations?

I have a follow up with orthopedic doc tomorrow so don’t really know. He said to keep up with the therapy and that it may come back to 100 percent may not kinda pissed me off. He thinks it was stretched during surgery.

The reason he isn’t more definitive is likely because he can’t be, because he is unable to determine with certainty the specific nature of the nerve injury (ie, stretch vs cut). If (as you said) he thinks it was stretched, that bodes a much more favorable prognosis than if he thinks it was cut. When do you go back to see him (the neurologist)?

That will be up to my orthopedic doctor I’m guessing they are gonna see how I do with therapy the next couple of months and if symptoms don’t get better probably do more tests and talk surgery. I hope it is able to heal itself this all through workers comp so they best be getting me as close to normal as i was before having this surgery/injury. I had to use their doctors so it’s on them for messing me up I would think!