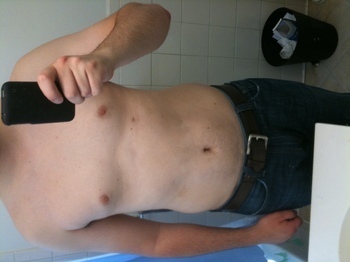 However, I am weak and want to make sure I am not getting into it prematurely my max lifts are as follows:

I am eating as cleanly as possible btw.

also, would I be better off with a linear progression program like starting strength? or should I stick to 5/3/1?

You need to lift while you cut, so go ahead and start your 5/3/1, just at a caloric deficit. Since you are a beginner (I assume) you can still make strength gains while cutting. Once you get your body fat down to a reasonable level, you can start lifting heavier and adding calories back. Watch your diet - what you eat is more critical than how you lift.

To answer your 2nd question, you will probably make good gains at this point on just about any program that stresses progression.

Honestly, I think you just need to focus on gaining muscle right now. If you try losing fat right now you’re just going to be skinny. If you gain 10-15 pounds of muscle, even with 10-15 pounds of fat, you’re going to look a lot better. Just watch your calories more closely if you are really worried. But I think you need to start lifting heavy and hard now.

Or you could just do like the above poster said and lose a few pounds while gaining strength because you’re a beginner.

[quote]DanJS14 wrote:
also, would I be better off with a linear progression program like starting strength?[/quote]

Yes. Get more reps in with Starting Strength or Stronglifts 5x5 (which is derivative of SS) and take advantage of beginner gains. Those maxes aren’t really your maxes for long once your CNS and skill level shoot up. You might as well take advantage of this and just keep progressing organically.

There was a good article on here a couple weeks back about just this argument for SS. I think it was Rip himself. The logic goes like this: A beginner doesn’t really know his 1RM so you’re starting from a bogus number for any scheme that has lifts expressed as % of 1RM. You have 1RM maxes but after two weeks of just about any regimen, they’ll be bogus. With 531 you’re adjusting your “working” 1RM once a month or so depending on WO frequency. With linear progression schemes, you just lift a little bit more each time and before you know it you’re making real, fast progress. Eventually it will stall; back off a couple of times until you hit a major plateau and then bust out 531. It’ll still be there, but you’ll know your body better and take advantage of the slower but still steady progress.

I think your question is spot on. Bulk or cut? I’ll go ahead and tell you I have no idea.
Some people will get angry at you because there are millions of these threads and they’ll tell you “Just eat dude, you’re gay. Get a muscle base to work with first,” then others will go “NO WAY SHOULD YOU BULK WHEN YOU’RE ALREADY FAT~~ GET BELOW 10%!”

Since there are so many conflicting opinions on what is the right way to do things. There are probably merits to both approaches. I would personally eat clean, but still eat in surplus and gain as much strength as muscle as possible. Then when you are desperate to lose some fat, try a change.

First of all, everyone is making this too complicated for him already. He’s a BEGINNER, don’t throw in the “gain while you cut” or complicated shit. He’s new to it and needs to be guided in that manner.

Secondly, I think it would do you good to lose about 10-15 lbs. before you hit the weights hard. I say this b/c you’ll see more results faster, keeping you motivated longer & working harder. Lose the weight, start the program lightly while you’re losing that weight. Once you drop it, hit the weights hard. Use the in between time to work on your diet & form on the lifts. After you’ve dropped it, kill it. You’ll see good results within a month or two.

pcdude hit the nail right on the head. Didn’t see his post until now.

I am eating as cleanly as possible btw.[/quote]

No, just do another cycle of 5/3/1 and compare results. I’m in a similar boat to you but I’m about 50 lbs heavier and maybe my BF is higher IDK. I’ve done my first cycle but I’ll be doing another cycle of 5/3/1 before looking at another program (I’ve been alternating between strict strength and fat loss work outs/accumulation and intensification).

Well done on the clean eating, you’ve got the right attitude.