I’ve purchased a shot-loaded globe dumbbell, and was wondering what would be best to load it with, shot or sand? If the answer is shot, where would I get it, and what kind? Thanks for any help.

We always use sand its cheaper and easier to funnel in as opposed to shot.

I think the shot will be heavier than sand? Here in the states, I would say Home Depot/Lowes/etc. Who did you buy it from? Post up a review after you have used it for awhile!

Got it from elite fitness systems - they had a black friday sale, and i was planning on getting one in the spring, anyways. I have a thick-handled adjustable dumbell already, but I couldn’t pass up getting one of these - I love the oldschool look, and the handle is 2 3/8". I haven’t recieved them yet (2 week wait before they send them out), but I’m getting excited.

[quote]BLUE wrote:
I’ve purchased a shot-loaded globe dumbbell, and was wondering what would be best to load it with, shot or sand? If the answer is shot, where would I get it, and what kind? Thanks for any help.[/quote]

Shot is going to be a lot more dense and will probably be more appropriate for a relatively small volume like the dumbbell. I have the Elite FTS loadable sledgehammer, and I found I could only fit 4 lbs of sand in there vs 23 lbs of lead shot. As far as where to get it, I bought some reclaimed lead shot from rotometals. If you know of a store or anything nearby that handles reclaimed shot you could probably get it cheaper there, but for me it was easier just to buy it online. Hope that helps.

I had my eye on that dumbbell as well, so be sure to update once you get it, please. 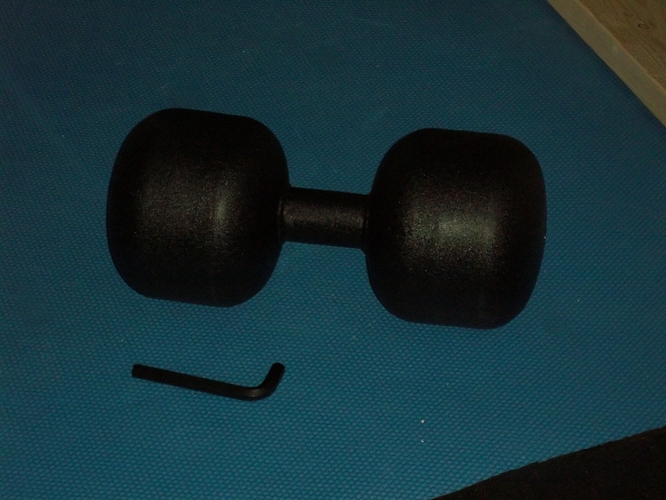 4000×3000 2.31 MB
Early Christmas!! the wbsite said there was a 2-4 week lead time for this item, but it arrived today, just as I was heading into the garage for a workout!! So it only took a week and a half. From the pic on the wbsite, I was expecting bare steel, but it is powder-coated a matte black, and solid as fuck. it came with a large allan key to remove the plugs on each bell.

Tried them both and everythings running smooth. Of course i don’t have anything yet to load it with, but I dicked around a little bit after training, doing some clean and presses and some onearm rows. huge difference on the cleans as opposed to my plate-loaded db, as I said, this thing is solid.

Happy so far, but I definately need to put together a list of moves I can do with it after my standard training sessions - It’s going to get used regularly. The only downside was that I got raped for an extra hundred buck by the taxman and the custom/brokerage fee. I’m in Ontario, so 50 was added for tax, and another 50 for crossing over. I’m pretty pumped about this beautiful chunk of metal, almost to the point where i want to grow out my moustache and wear a leopard-print singlet while training!! 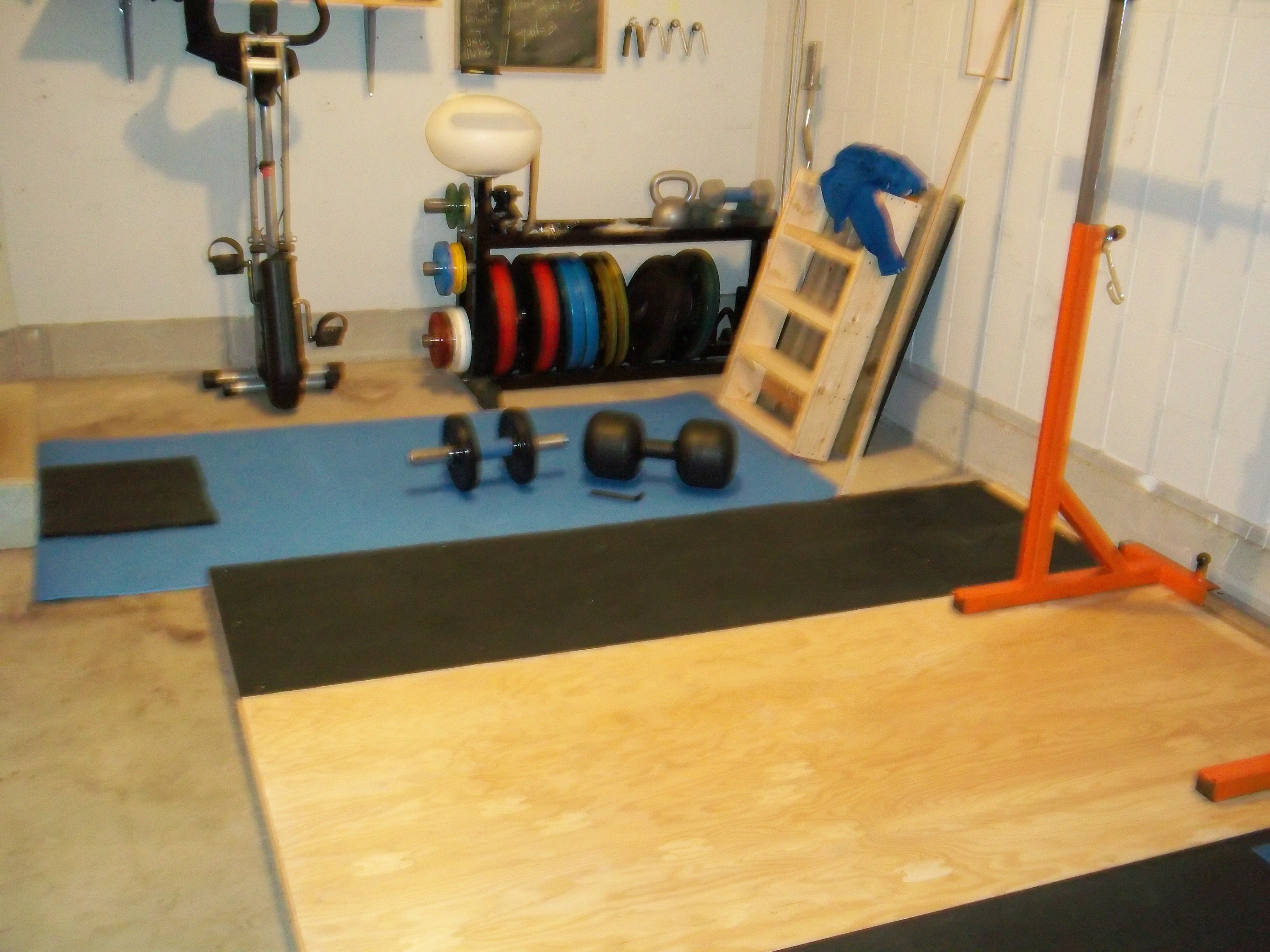 another one of my gym, camera is not working properly, so it looks a bit fuzzy.

I was going to ask what the brokerage costs were but saw your post. Was that UPS? As much as it seems you got ripped, I was actually shocked on how little given the price of the Inch. I ordered a DVD from Elite in the past, $30 for the DVD, $16 to ship, and $48 in brokerage. Hate UPS.

But would love one myself. What does it weigh empty, if you know?

That looks nice! I have been wanting to break down an buy the replica inch from Jackyls but that looks quality enough to maybe change my mind. How heavy can you load it up?

It weighs 47 pounds empty. Fully loaded would depend on whether you use shot or sand - I imagine either will fill it to the point where I can’t lift it. The website says 172 pounds loaded - the exact specs for the original Inch dumbbell. At atomic athletics.com, it has a similar product (for a fair chunk more$$$) and it says it can be loaded to 195, depending on the filler used.

As far as shipping/brokerage costs, apparently Dave Tate had problems with whatever international shipping he was using before (lost/undelivered items), so he switched back because he’d rather people got the product and were pissed at the border expense than not get the product and be pissed off at him. Even with these extra costs, I’m happy with this purchase, and I’ve never had problems with quality from efs.