I have 3 month until TRT clinic wants bloods. Not sure I have enough time for a short T only cycle and get back to normal blood lvls for my checkup.
What say you? 8 weeks on then 4 weeks to return to normal? Do-able, worth it?

Test suspension can be used for 4 weeks with nice results. Test prop 6-8 weekers works. Not giving advice on doses, cycle or anything however yea one can cycle for shorter periods of time. I personally think if using high doses of gear (in my opinion anything over 350mg/wk) then the shorter the better as it minimises the amount of time spent on potentially damaging doses.

Eight weeks is certainly long enough for you to make some gains.

I have been curious about that myself. After I can get some weight off me I am real tempted to have at least one blast to see how it feels. Was thinking I wouldn’t be able to blast long enough and get my blood back down to “normal” for the 3 month labs.

Give yourself three weeks to return to normal numbers, if using test e. Or just blast with prop and you can run it higher for 10 weeks and be good to go for blood work.

Give yourself three weeks to return to normal numbers, if using test e

This. E and C are about the same, and I have run eight weeks of C, then dropped it and had no problem with my blood tests being wacky. You can run eight weeks of 500 a week, and then drop to normal for two weeks, then cut your last shot a bit, and your numbers should end up around the same.

How much would you recommend cutting off the last shot? Just take 10-20% off something along that line just to play it safe?

Thanks guys for your ideas and suggestions.
I’m not going to risk my scripts so until I know for sure my bloods will look good on my 6 month checkup. My plan is 300mg/wk T cyp 100 x 3 M/W/F for 8 weeks then go back to my normal TRT dose of 120mg/wk. I will probably buy a private mini blood test for TT FT E2 prolactin and HCT. If my blood pressure climbs toward the end I will donate a pint and if that happens I will add ferritin to the mini test.
I took some before picts but will only post a before/after if I see gains worthy enough to promote a 8 week mini.
If my bloods workout I will have a little more experience with how all the works for my body, you guys know the saying everybody is different, I will give 500mg/wk mini a try.

Just a little update. My mini blast is over. Some basic info I started back on Nov 21st at 300mg/wk 100mg M/W/F using T cyp. 200mg/ml . On Dec 26th I upped my dose to 110mg M/W/F. The reason for the small increase is it took almost a month to notice any improvement in strength or recovery from my TRT dose of 120mg/wk. I am also taking 800iu HCG/wk and have anastrozole on hand as needed. I have not really felt like I needed it very much over the last 6 weeks I have taken 5 pills @ .125mg each.

I’m ending it now after getting my mini blood test results today.
Bloods don’t look good. HCT is too high and Ferittin is too low. Donate blood and I am F’d. 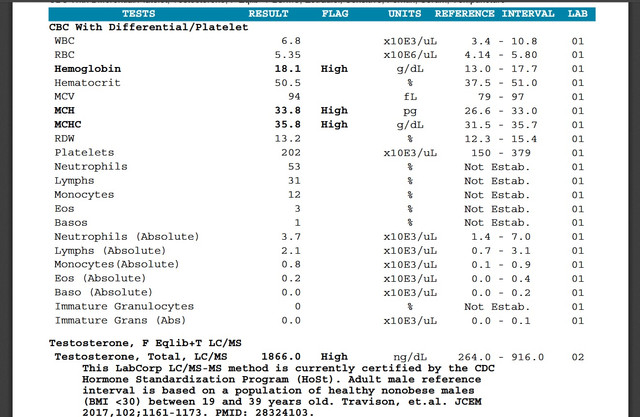 For those that don’t recognize the TT/ FT test I had run it is the latest super accurate no upper limit test offered by labcorp. It ain’t cheap at 100 bucks but IMO it is worth it.

My plan is to cold turkey the T injections for 7 days. I don’t do PCT do to being on TRT. Then restart at my normal dose of 100mg/wk. Start taking Iron and Vit C to up the Ferritin asap.

I did lose my visible abs. 7 days ago I added 5 g of Creatine. Me and creatine don’t get along I get bad water weight from it.

What did you do for forearms? Thats some pretty impressive growth considering you added 1 inch to your quads, and 2 inches to your chest. Both of which are alot bigger muscle groups

Ok i get it…so with all other coumpounds wait till next cycle… Tell me i hawe read many about tren…but some say is better for bulk and some that’s better for cut…so what do you think…? Or can it be used for both? But what’s it more effective for? What about droping the dosage near end Of cycle? TestE from 800/week to 500/week last few weeks? Thanks for answers! Another thing… How do you train on gear? Some workout example please? I’ve changed jobs recently (now i’m working a lot mor physi…

The increase you’ve seen lines up with what (some) literature has demonstrated. Here’s a picture from a study (well known study), however the charts document the haematological responses from graded doses of testosterone.

You should see the study in which bodybuilders used oxymetholone for 6 wks, haematocrit increased by like 6% in 6 wks!

The reason you’re Ferratin has decreased is because you’re using up you’re iron stores in order to compensate for the making of new RBC’s, when iron stores run out, the body can’t synthesize more RBC’s… However tank iron stores for too long and you can end up with iron deficiency anaemia. That’s just how I understand it though, I’m no expert

You’re Ferratin isn’t that low, my Ferratin in 10, that’s low.

Thanks Unreal. Yes I know about low ferritin. It took me 8 months to get it back to 110 from 15.
With one dam donation back in Aug I’m now on the edge again with that 45. I can’t donate because I know it will drop below the lower range and if my HCT goes any higher than 51 my doc will reduce my T script and if it gets too bad they will pulling the script until HCT and ferritin are back in range.

Hey bro. I’m 9 weeks into a similar “mini blast”. I started on the same protocol you did. 300 mg Test E p/w split into 100 mg Monday Wednesday and Friday. I was nervous about e2 so I decided to supplement DIM from day one. I didnt think the DIM would do anything really just give me some placebo comfort that I was doing something. It totally crashed my e2. I lost my libido completely by Thanksgiving day. I was like that for around 6 weeks or so before i pulled bloodwork. I dropped the DIM and switched to Monday Thursday injection schedule. Felt better within a few days. I’m gonna pull bloodwork again next week to see where my e2 is sitting.

Your levels both total and free are obviously much higher than mine. I’m assuming your shbg was low at the time of this test as your free t is double mine. My shbg was 19.7. Interesting comparison here.

My hct numbers on the same draw 300 mg per week

300 mg Test E p/w split into 100 mg Monday Wednesday and Friday. I was nervous about e2 so I decided to supplement DIM from day one. I didnt think the DIM would do anything really just give me some placebo comfort that I was doing something. It totally crashed my e2.

Holyshit I had no idea DIM could do that. I always though it helped you dump E2 from your body but would not actually drop your blood numbers. Wow learn something new everyday. So you aren’t taking any AI? Your supplier didn’t give you a bottle of T E that had anastrozole in it?

It is interesting about our SHGB’s mine was actually higher. Here my pre mini Blast shgb. I was actually checking on my IGF-1 because I was experimenting with Sermorelin and Ipamorelin but I thought why not get the per miniblast numbers as well. I did not check my shgb on that last mini test is was just T E2 HCT & ferritin.

I have anastrozole in .125mg but really did not feel like I needed it this time I only got weeps a couple time and took one then just waited. I’m in the camp of a T/E2 ratio of 15-25 so when you raise your T during a blast you let your E2 go up as long as you don’t start crying all the time, haha. Or your boobs start leaking water :-0

No ai. They better not have put anastrozole in the bottle. It certainly wasnt sold that way or labeled that way. I’m almost done with that bottle and moving to another brand. I’ll test before I switch. That’s wild that your shbg was 29 and your free t is double mine. Makes me wonder if my gear is under dosed. I am now on 350 mg a week so we shall see what my numbers look like. Outside of the e2 issue I was pretty happy with the bloodwork I got on 300 mg