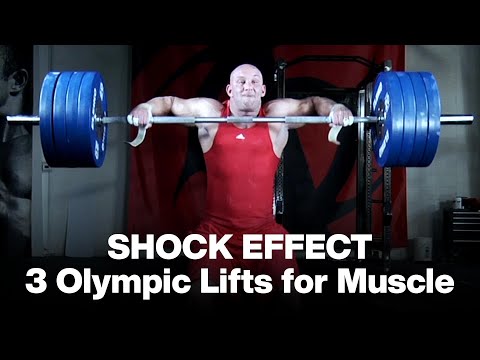 See new muscle gains in four to six weeks by adding a couple of these powerful Olympic lifting variations to your workout plan.

When it comes to hypertrophy, intelligently changing exercises is an effective way to spark new growth. And certain Olympic lifting variations work very well for this.

See, it becomes increasingly harder to keep stimulating adaptations (muscle growth) when your body becomes adapted to a type of stress. When you introduce a new exercise, a new type of muscle contraction, or a different way of training, your body has no choice but to adapt. Why? Because it’s not efficient at that type of action yet.

At least for a while, the “shock effect” of a new training stress will set off the muscle-building process, even if that training stress isn’t traditionally considered a bodybuilding exercise.

Why does this happen? Well, when you’ve become efficient in a movement, you develop good intramuscular coordination. The muscle fibers are better coordinated, and the load spreads over more of them. This results in less load per fiber, which leads to less muscle damage and growth stimulation.

But if your intramuscular coordination is bad, each fiber must handle a much greater load because they don’t combine their effort efficiently. The result? More damage and growth stimulus.

If you’re an experienced lifter, you’re already efficient at most standard exercises. What you need now is a shocking new stimulus. Here are three snatch-related exercises that’ll give you a novel stimulus. Do them for 4-6 weeks and you’ll see renewed gains.