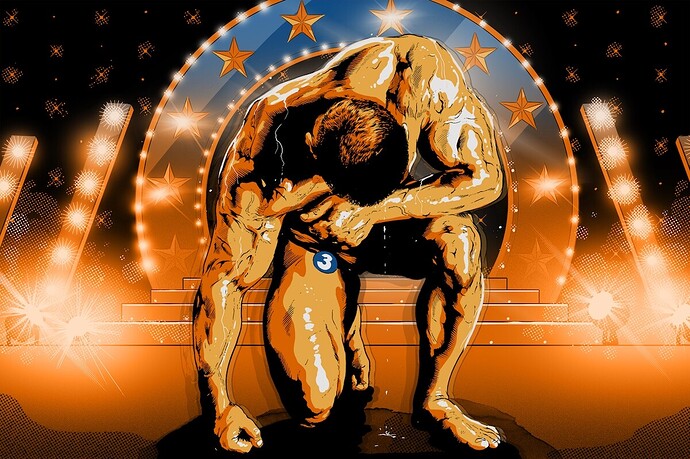 Bodybuilders are risking their lives, and in some cases dying, because of extreme measures that are encouraged by coaches and rewarded by judges.

I am maybe halfway through the article and it’s already a ton of tragic stories.

Thanks for sharing. I look forward to everyone’s justification to do what they were going to do anyway.

To mitigate a little of my lack of commitment in the above statement: I think it’s totally your decision how far you want to take your risks. I also think it’s totally disingenuous and a bit cowardly to try to convince yourself (others) there are no risks.

try to convince yourself (others) there are no risks.

I feel like it’s constant. That said, I don’t have a ready example!

It’s no secret that prep coaches use their client’s photos as ads. So I have to wonder (but haven’t bothered to check), do they remove the dead clients from their websites and social media?

From the article (after the death of a client):

"A few days later, Starnes posted a tribute to his client on Instagram: “Rest in peace, Mariola. A mother, wife, and sweet soul that passed away far, far too soon. Life is truly fragile and can be taken from us in an instant.”

That pretty gross, even by the standards of the competitive bodybuilding world.

“I find that females are a little bit more trusting…,” Starnes explained in a 2019 interview…

I know it’s a two-way street, the competitors know the risks which is why they hire the “experts,” but it’s surprising that these guys aren’t getting sued for wrongful death.

(And yeah, I’m aware that Starnes published a few articles with us back in 2011.)

I remember when bodybuilding was support to be about health. We are quite the species.

My heart goes out to the families. This is awful for so many reasons.

If Starnes is recommending his clients use certain compounds at exorbitantly high doses, and the competitor dies as a result, shouldn’t he be held for involuntary manslaughter at least?

I thought the most damning quote in that article (I’m paraphrasing now) is when he asked the client facing kidney failure why don’t we just keep on with lifestyle coaching? Come on

And then you remember that there are teenagers getting into this World before they’ve been around long enough to consider their own mortality. I can only see this as a problem that gets much worse before it gets better (if it ever gets better…).

Yes, that was infuriating to read. Effective lifestyle coaching might be, “Hey, how about you don’t risk your longterm health and even your life to win local bodybuilding shows?”

For real. It further betrays the goal is keeping the sale above all else

If Starnes is recommending his clients use certain compounds at exorbitantly high doses, and the competitor dies as a result, shouldn’t he be held for involuntary manslaughter at least?

Legally - no. Unless he was forcefully making them take the drugs or providing the drugs. They took illegal substances of their own volition.

Morally he’s a piece of shit.

Bostin Loyd. I remember watching his “epic 1-year steroid transformation” video in 2012 and having a friend of mine joke that he’d be dead by 30.

He died of kidney failure earlier this year at 29 years old.

I’ve worked with Shelby 3 times, twice for a cut and once for a show prep all 8+ years ago. While he never pushed to use anything, he was very quick to respond and recommend dosing when I decided to use an ECA protocol for the final stretch. What stands out to me was the insane amounts of caffeine (north of 1200mg a day!) and the flushing protocol in the final 3 days from herbal diuretics plus drinking buttloads of water. Whenever I reached out with concerns over stomach pain, dizziness, lack of focus etc, my concerns were never even acknowledged let alone met with any sort of empathy. It was just very much a “you gotta suffer to get the best results” mindset. For a few days after my show, I very strongly considered having one of my roommates drive me to the ER a few times. It felt worse than any flu I’ve ever experienced and I had to lay on the couch drinking pedialyte just to get back to baseline. All this…and I competed “natty” in the global physique division. I couldn’t fathom prepping with him for BBing division on gear.

A few years ago I decided to do my own cut and got down to same leanness as I did for my show with Shelby without ever touching EC or diuretics and only ever using a very gentle dosage of green tea extract. I never felt like death in the process. Another issue is he is very quick to get his clients down to basically zero carbs ASAP…all in the process of getting very dramatic and rapid before/after to put up on his IG. I even remember one guy on here competing shortly after me that was eating like 300g protein every day with zero carbs and like 10g of fat a day, and no refeeds or cheats under Shelby’s coaching. Shit is bonkers. Any ethical coach would tell that client “Let’s compete in a show 6 months later and take a more gradual approach”

To end my rant, I’m still a little salty about the one time I paid him for a 12-week “customized training plan.” I put in all the effort writing up my training history, strength numbers, goals, etc. Only a handful of years later, he posted a split on Elite FTS set for set identical to my 12-week plan. So he no doubts sends a copy/paste to every client that paid him for a customized plan, and probably still does it today.

According to the article, he mailed at least some compounds to at least one competitor. That seems like a good way to catch a felony or two.

To end my rant, I’m still a little salty about the one time I paid him for a 12-week “customized training plan.” I put in all the effort writing up my training history, strength numbers, goals, etc. Only a handful of years later, he posted a split on Elite FTS set for set identical to my 12-week plan. So he no doubts sends a copy/paste to every client that paid him for a customized plan, and probably still does it today.

That is the only way people with 100 clients do it, including those who many think are great guys.

Thank you for sharing the experience @jskrabac; it’s awesome to get a first-hand account of the kind of stuff that goes on… especially from someone that’s been as successful as you with a different approach. We can’t just say “that’s how it is,” because you’ve lived both and demonstrated it doesn’t have to be.

Very insightful. Thank you for posting.

Still I think you can at least have a handful of different training programs depending on the type of client, more like CT does on here.