So why the hell not? My training notes have to go somewhere and new structure can invigorate a routine. The Lords of Iron do work in mysterious ways…

Brief recap of the last forty seasons:
Super skinny dude, mostly doing martial arts and GPP stuff finds T-Nation after some training research in the pre facebook era.
Hey, this lifting might not be as idiotic as I thought!

Weight training was never a passion in itself. Lacking talent, I also had to work harder and longer then pretty much any training partner I ever worked out with. So after successfully leaving the realm of Skeletoria for good and loving the new found respect (men) and attention (women), I mostly did what I had to do to maintain a somewhat athletic build around 83-85kg. I could press my bodyweight overhead, DL twice my weight, I was happy.

I’ve sampled most lifting philosophies from Arnold’s 6/week ABABAB to Thibaudeau’s layer system to Milo’s calf-carrying method. Not only because I’m a slow responder, but testing out new exercises or methods in order to understand my body is weirdly satisfying.

This year, a naughty Chinese vixen passionately took command over my hormones.
Corona Chan cut me off from all cardio related exercise and I… decided to roll with the germ-infested punches.
Fuck it, here’s the last bulk of my life
I thought it would be a good idea to fill out some missing spots through a bodybuilder-style approach with more isolation. Like a good bro, I also did very little for my legs because the traitorous wheels have always been protein hogs, taking the lion’s share of my meagre gains into their disproportionate, quasimodo-like myocytes.

To my surprise, it worked far better than anticipated. At least the bulking part.
I’m now sitting at a doughy 100 kilos but hey - it worked.
I guess I’ll keep on pumping while ditching the chocolate, slowly holding onto the muscle while trimming down.

My outline for the next month is as follows

First workout:
Lower Body/Legs , which I’m probably gonna do once or twice per week

Since I don’t have a squat rack at home and made good progress with a simple volume approach a la “Hungarian Oak Leg Blast” in such a situation, I’ll repeat just that.

Bulgarian Split Squads never clicked with me before but I’ve decided to give them one more try.

I probably did too many reps on the BSS and should focus on strength there to not lose energy for the volume set.

Finally a circle with some isolation:

nothing special, just getting into it again.

I took the inspiration from Brian Alsruhe aka Alpha after YT insisted I watch some vids of him. Very nice stuff indeed.

forced myself to do

It seems clear that now I get far too little sleep. While this session felt better than the crappy first two, it’s fairly obvious that it’ll take at least a week or two of disciplined, timely visits to slumberland before my energy levels are adequate. In a sense I’m thankful for those sessions for making me realise my fatigue.

Shoulders are still not 100%. Need specific warmup next time.

Midnight was approaching fast and there’s still chores afterwards, so one last superset

All things considered I managed to achieve a good pump. With the deltoids back in line, I can hopefully add some isolation there, too.
Still not sure how to put the split together but this setup is actually quite fun. I didn’t do the SGHP for years and the Dip setup (on fists) is interesting.

The setup is supersimple but its the best bang for buck workout I’ve ever tried out.

You pair antagonistic supersets together for only two sets, then head to the next pairing. So, for instance, you go (after warmup) : Overhead Press-weighted Pullup - DB Overhead Press - weighted Pullup with just a little rest in between sets. The first two sets are conservative 5 -10 rep range affiars. The second pairing is to total failure with forced/drop set reps.
Afterwards, you head to the next pairing.

I did four angles of attack:

DB curl & Arnold Press (with 17,5 because I still can find my other plates dammit!)

Shoulder warmup took a while. It was a good decision to do the dips first which needed three warmup sets on their own. From there it was mostly two straight sets as prescribed.
Great pump.

Finally a second training session for the day. Been a while!

I did a decent amount of antagonistic leg movements, too, which aren’t exactly kicks but look rather queer. These are useful however and I should’ve included this 20 years ago. Some are simply for joint health and feel darn good, some are for general dexterity but some movements are acutally useful, ie to counter caught kicks and slip away.

I like the title and username. Cool writing style as well. Will be following along. Do you or did you compete in any kind of martial arts or just doing it for fun?

Years ago, mainly standup diciplines. Light competitions only, nothing approaching pro level although I have sparred with good people and am still obsessed with technique to this day. I’ll probably enroll in some class next summer if family life allows for that.

Need to give ring dips a go at some point

One of those exercises I always fear will take me to snap city however deep down, I know it will most likely take me on a detour to Gainesville, Arizona

Yes, Dips are already hard on some shoulders as there’s this big, natural range of akromions. Nothing that can be realistically done about that. The wobbliness on Rings can feel worse if you have a bigger hookbone up there. On the other hand, this protrusion should probably give you more stablity for other exercises?
My guess is that if you can do Dips, Rings are probably good to go. 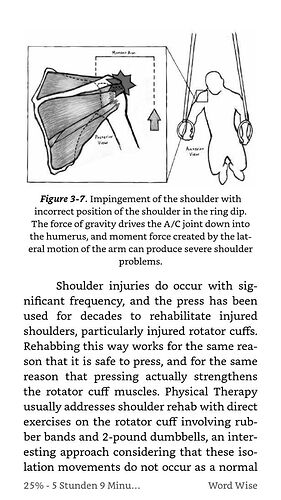 Ridiculously late, again. As I’m eating the kids’ leftovers, it’s past 1:00 AM.
This ends now, starting today training shall be finished at 23:00.