Man that will be tough. 3 times a week. I understand it will be better but thats alot

You will need multiple injections per week to keep from becoming estrogen dominant, something I know all too well. Daily (10-12mg) is best and second is EOD (20-25mg) injections. You will more than likely feel better on a daily protocol, estrogen will be better controlled and the peaks and troughs will be very small minimizing side effects.

I use 29G insulin syringes (32%BF) in the shoulders and quads, no pain.

Thanks for the replys again gents. What length insulin syringes do you use? Is that something i can ask here sorry if not. 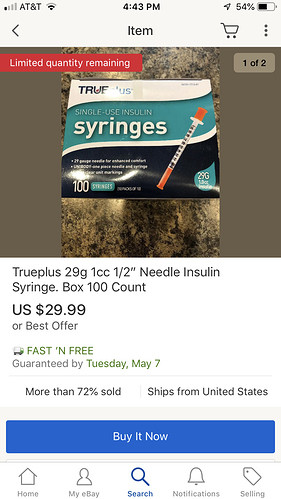 1 cc is too small I believe. Length would be fine

Dam that is expensive I pay 12.95/100 for easy touch 27ga 1/2" from OTCWholesale
Don’t try 29 ga to start you will hate them. 27ga 1/2" long is the best for subQ. I can load and shoot in less than 30 seconds. It takes those 29er guy 5 minutes or more. They warm the oil even then it takes 2 minutes to load. Then when you inject you got to push until your thumb is blue.

1 cc is too small I believe. Length would be fine

My insulin syringes say 1cc 1ml we usually inject .5ml .25ml no one injects 1ml 100units on TRT unless they are injecting 200mg of T which for 95% of men only need half of that.

Mine are 1 ml, but that pic looks like the really little ones,

I agree the picture does look like the .5cc .5ml I still can’t believe that price.
Since the OP has a real script for T he could just go to walgreen or any pharmacy and buy a 10pack $1.50 of different sizes. The sizes are31,30,29,28,27 I don’t know if one can get an insulin syringe larger.

What length insulin syringes do you use?

Insulin syringes are usually half inch which is what I use and is technically considered shallow IM. Takes about 30 seconds to fill a 29G insulin syringe.

I started out with 18G, still have nightmares.

Any brand name better or less painful than others.

Wow. I have an 18g from prescription. Its why i am afraid. Lol

I have an 18g from prescription.

This prescription of 18G harpoons is just confirmation your doctor is not up to speed on TRT and probably won’t be able to help you manage your TRT or symptoms encountered, you must rely on yourself and self educate. An 18G will cause muscle tissue damage over time.

This is very common for doctors to be clueless, TRT isn’t taught in medical school and most have no education in sex hormones, so really it’s no fault of their own. You should know if you hit muscle, there should be resistance because muscle is hard and fat is soft.

1 cc is fine. .5cc is actually better. You can read it more accurately and get a better draw with a higher guage

.5 cc is fine for really small dosing, but there’s not much wiggle room when drawing up and then removing the air. And if he changes they’re too small. I’m twice a week and those would be too small for me. Besides, bigger needles are easier to handle unless you have hands like a little kid.

Yea i guess im only filling 37 out of the 50 units eod half hcg half test. I dont have gorilla hands but pretty big i just have good dexterity i guess. I bought like 800 of the .5s and 1s. I like the markings on the .5 so I use them. No harder than the 1s. Just fills quicker

Thank you for all of your feedback. I think I’m convinced of doing EOD using 27g 1/2” 1cc/ml insulin Needles. SubQ in stomach. I did the E2 test today so hopefully i have a result by Friday. Maybe i can start this next week. Im thinking of 20mg EOD. And see how it turns out. I do not want to go on a AI at all

@systemlord - my first doctor I saw wrote me a script for 23G needles. I used them until I found this place and ordered smaller ones.

I do not want to go on a AI at all

Then you should limit your weekly dose to 100mg. Until you know how much E2 that makes. Do a mini blood test of TT/FT/E2/HCT in 5-6 weeks after your first injection. Most guys don’t need an AI at 100mg/wk But no guarantees if you are carrying a lot of body fat 1oo might be too much to go AI-less until you lose some weight.