5 shot. Nobody dead. Police fired back and took the shooter into custody.

I guess all that “Resist” and “Antifa” rhetoric is working. Shot people at baseball practice, clearly a communist. This could get bad real quick. Although the motive is still under investigation, the shooter had posted anti-Trump rhetoric on social media.

I guess all that “Resist” and “Antifa” rhetoric is working. Shot people at baseball practice, clearly a communist. This could get bad real quick.

Well, we don’t know the motivation. That said, operating on the spouse-usually-did-it level of police hunch, it appears he targeted Republicans on purpose, so you are probably correct this is an unhinged leftist.

And, despite all the hype about angry white men, they tend to be pretty law abiding (although loner exceptions abound), while the violent left is more widespread and organized.

Remember, actual political assassinations tend to be from leftists in the USA: Lee Harvey Oswald was a card-carrying communist mad at what-would-be-now a moderate (probably Republican) John Kennedy. The fat loser who shot Reagan – another violent liberal loser. Heck, even Squeaky Frome (of Mason Family fame) who shot at Ford, while mainly just a nut, espoused hippy nonsense.

So, yes, odds are, he’ll turn out to be a Democrat.

And, yes, the fact that Time/Warner/CNN sponsor a play about the assassination of Trump, the fake “hands up, don’t shoot” lie, and the other evil and violent nonsense played up by the left has created a really piss-poor environment, ripe to encourage violent acts like this.

They’ve been very irresponsible (as has Trump, in other ways) in creating a culture that very well could fall apart.

Well, we don’t know the motivation.

Well, never-minds. He was a prominent Bernie supporter and full-drinker-of-Leftist-cool-aid. 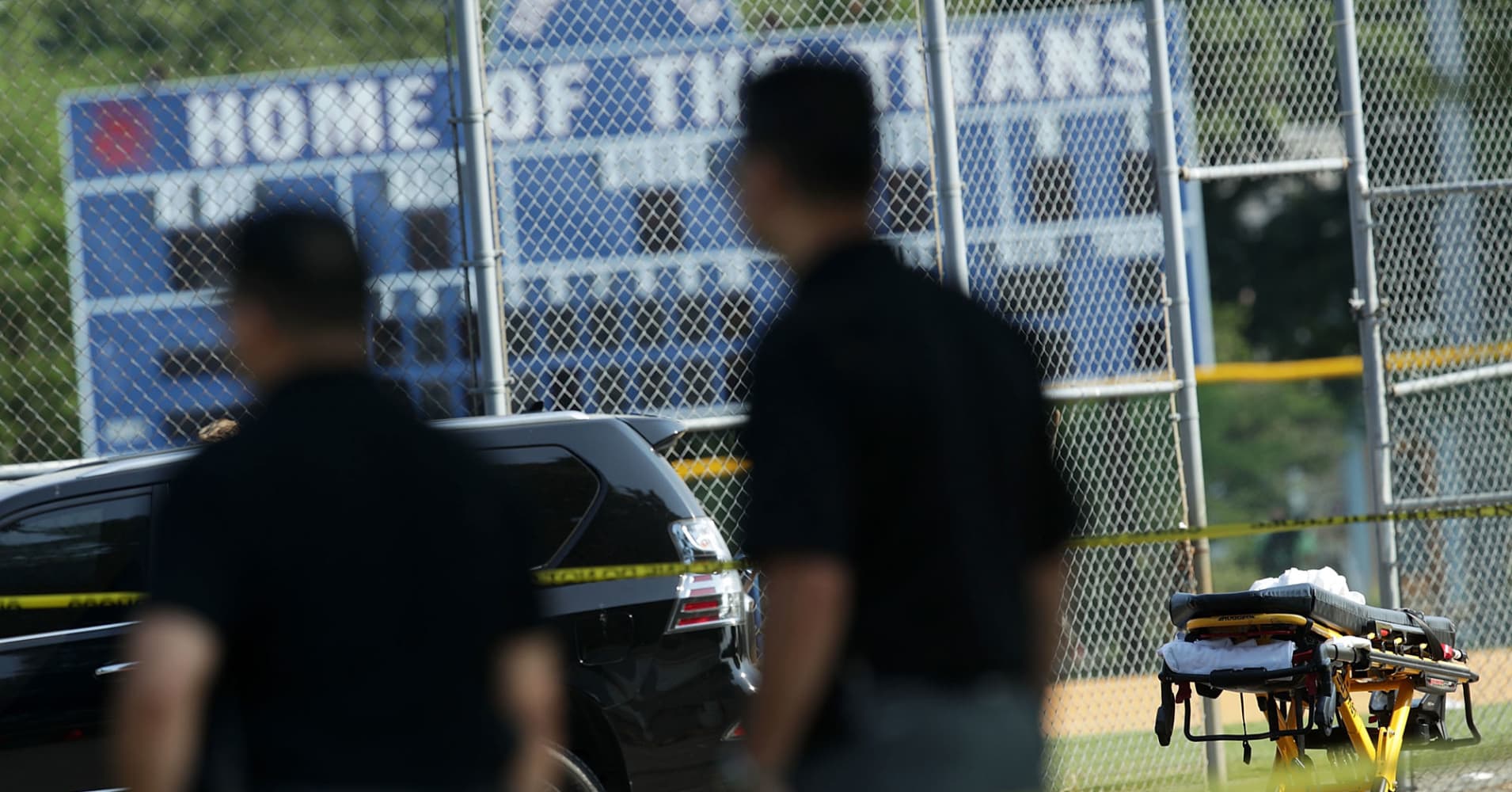 The man who allegedly opened fire at a congressional baseball practice has been identified as James T. Hodgkinson, NBC News reports.

The left is calling for gun control. The right is blaming the rhetorical agitation on the left. So… pretty normal stuff. Not much to be learned. They will tone down the venom for a few days… maybe.

This is what happens when the political rhetoric goes too far. Those who are already somewhat unstable are able to commit despicable acts like James Hodgkinson a Bernie Sanders supporter who attempted to gun down republican lawmakers as they played baseball.

Vermont Sen. Bernie Sanders responded to the news that the Illinois man who shot GOP lawmakers during baseball practice in Alexandria, Va. on Wednesday was one of his supporters and had volunteered fo

The left had decided that violence to suppress conservative speech and activities is a valid form of social protest.

Conservatives (and Jews) (and especially Jewish Conservatives) speaking on college campuses are met with such violence the colleges tell them to go away.

Leftists killed millions during the 20th century to push communism and socialist fascism.

Most, if not all, of the political assassins in the USA have been Democrats or leftists of some kind: John Wilkes Booth, Democrat; Lee Harvey Oswald, Communist; Squeaky Fromme, hippy nut; John Hinckley, Jr, Democrat.

The left had decided that violence to suppress conservative speech and activities is a valid form of social protest.

Yes, this is how to handle this tragedy. “Your political party is more violent than mine! What, you don’t agree? Than I’ll fight you for it!”. There are peaceful, kind conservatives, and peaceful, kind liberals. Just as there are wackos and loons that resort to violence that would claim both party as their own.

Politics are just something humans invited. Let’s not attach so much meaning to political affiliation that homicidal activities become a natural extrapolation of your voting habits.

I agree with you antiquity…but what is being encouraged/not dis-couraged on many (not all) College Campuses is appalling (as it relates to free speech, political thought and revisionist American History).

I have a colleague who is going on a College Road Trip with her daughter to look at colleges.

One of their stops is Berkeley.

I told her that I would pay her daughter’s full tuition just to not step foot on that campus!

I told her to stick with Southern Football Powers!

As long as her daughter avoids “The 2 “F”'s”…Frat Parties and Football Players…she’ll have a great time and get a great education!

Yes, this is how to handle this tragedy. "Your political party is more violent than mine!

I agree with you to a certain extent. But, in all fairness from Robert De Niro saying he wanted to punch Trump in the face to all of the rioting on the far left. Madonna saying she thought about blowing up the White House. Kathy Griffin holding a picture of Trump’s bloody head. The far left has certainly escalated the violent talk and now this nut case a Bernie Sanders campaign worker tries to kill a group of republican Congressmen.

You will have to admit it was probably only a matter of time before something like this happened. We can only pray that this is a turning point and the exceptionally nasty, hateful talk which can easily turn to violence dissipates.

Is mufasa a leftist?

Some reason I thought he was

You will have to admit it was probably only a matter of time before something like this happened. We can only pray that this is a turning point and the exceptionally nasty, hateful talk which can easily turn to violence dissipates.

Hmmm. I think the tricky part here is when you blame the people you are violent toward for your own act of violence- The old, “I wouldn’t have had to do that if you weren’t…” whatever it is they don’t like.

Let’s not do what leftists do. We have a twisted individual that did a horrible thing. CNN and Bernie Sanders didn’t do this. I abhor leftists ideology and media sensationalism but lets remember that the individual had the desire to kill and then acted on it.

He was a Bernie supporter therefore all leftists are terrorists!

He looked like someone had his balls in a vice grip while he was getting a rectal exam.

He SO wanted to blame the DEMS, Hillary Clinton, President Obama and the Left for this shooting, that he looked like he was about to throw up…

I actually AM Left-Handed!

The fringes of both sides are beyond loony and trying to compare or placing blame for these type of acts is pretty sad. This world is better off with him dead

He SO wanted to blame the DEMS, Hillary Clinton, President Obama and the Left for this shooting, that he looked like he was about to throw up…

For a word salad serving buffoon he did pretty good at not doing that. I mean, the left has only attacked his youngest son, published a red headed clown woman behead his effigy, and has a play that does a mock assassination of him.

Compared to Obama, who couldn’t hold his tongue on the second amendment if his life depended on it, I’d say he did Ok.

I have a feeling that Trump was begged…and I mean literally BEGGED to: