Texas governor has said he will pursue legistlation to oust mayors or sheriffs that continue sanctuary cities. After a bit of searching, l am curious as to how he can get an indictment, by whom, and what actual legal reason.

Anyone shed some light here - @thunderbolt23? Texas Gov. Greg Abbott is vowing to pursue legislation to remove from office any official who promotes sanctuary cities -- potentially raising the stakes for local sheriffs and mayors who defy federal law.

My understanding is that the bare minimum a city has to do to be a “sanctuary city” is to not report on the immigration status of someone they’ve already arrested to ICE.

So all this nonsense about brownshirts and deportation armies is hyperbole. It would take 5 min to check if the guy in your holding cell is an illegal and fire off an email to the feds.

More to your question: I don’t think currently under Texas law they can bring charges against city officials for failing to comply with federal laws. Enforcing federal laws is outside the purview of mayors and local pd. What the state of Texas can do is make it a misdemeanor in Texas to not file the paperwork with the feds. I’m sure that cities are required to report domestic terrorists and interstate criminals to the FBI, so not unprecedented.

It would be a very ugly legal precedent to force cities and states to enforce federal law. This would be an easy way around all that. By sending a report to ICE they are not enforcing federal law, and the governer could propose a law that failing to do so is grounds for dismissal or actually a crime in Texas.

I was reading how the sheriff of a county is a position set up in most of the state constitutions, and has been common law in the US since early 1600’s. Here are 2 pro sheriff sites. Don’t know a thing about either.
My questions still remain as to how one could be actually removed from position.

I just don’t see any way to credibly remove local officials, especially for the mere bad act of suggesting or advocating for sanctuary policies. Top down removal just isn’t part if how state constitutions and laws are organized (speaking generally). And for good reason.

Sanctuary policies are simple a species of nullification, but there’s no real mechanism to remove the offenders, especially if they are in elected positions. The way to deter sanctuary policies is through the purse.

Amid protests over President Trump’s executive order aiming to block federal funding to so-called sanctuary cities, Republican legislators across the country are moving to deny their own funding to cities that refuse to comply with federal...

Good luck republicans. Even if they only block LEO federal aid there will be sob stories “Joe the policeman lost his 40 year job as an LA cop because the feds pulled funding.”

I wonder if they have the political will to endure the hand wringing and the paid Soros protestors at their town halls. 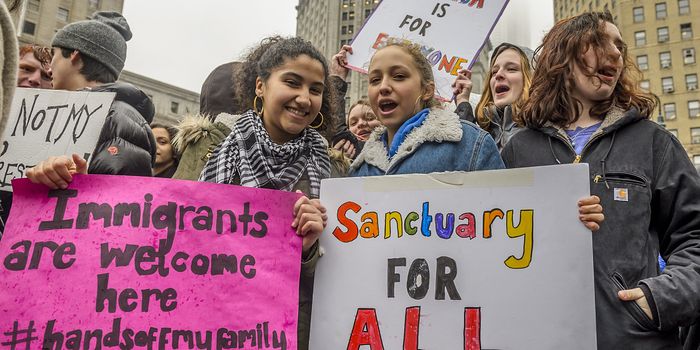 Seeking Their Own Refuge, Sanctuary Cities Go to Court


From the article, in the event of paywall -

Defenders of sanctuary policies—including many law-enforcement officials—maintain that cities are safer when illegal immigrants are free to report crimes to police without fear of being deported. During the campaign, however, Mr. Trump vowed to end these renegade policies on the grounds, he said, that sanctuary cities are more prone to violent crime.

In fact, empirical studies have long shown that the foreign-born, regardless of legal status and country of origin, are arrested and incarcerated at lower rates than their native-born counterparts. Net migration from Mexico has been zero or negative in recent years, and illegal border crossings are at their lowest point since the 1970s.

Mr. Trump’s claim that illegal immigrants drive murders, rapes, assaults and other violent crime is also divorced from the reality that crime rates in the U.S. plummeted in recent decades even as illegal immigration soared.

From the mid-1990s through the mid-2000s, the country’s undocumented population doubled to roughly 12 million. Over the same period violent crime in the U.S. fell by more than a third, and property crime dropped more than 25%, including in border cities like San Diego and El Paso, Texas, which are home to large numbers of illegal immigrants. Violent crime in the U.S., by and large, is homegrown, even if undocumented foreign nationals provide convenient scapegoats for politicians.

Statistical evidence, however compelling, is often no match for a powerful anecdote. And in condemning sanctuary cities Mr. Trump has regularly invoked the tragic death of Kate Steinle, who was murdered in 2015 on a San Francisco pier by an illegal immigrant who had been convicted of numerous felonies and deported multiple times. If local law enforcement, who had the alleged assailant in custody, had complied with the federal government’s request to detain him until it could be determined whether he should be deported, Steinle might still be alive. Her death was a statistical aberration, but that’s of little comfort to her family and millions of other sympathetic Americans wondering why our immigration policies don’t seem to prioritize their safety.

Which gets us back to the opponents of Mr. Trump’s executive order. Sanctuary cities are the exception, not the norm. Most jurisdictions readily comply with federal requests to assist in immigration enforcement. But it’s also true that the illegal immigrant population is concentrated in progressive strongholds such as Los Angeles and New York, where defiance of the new president is not only applauded but demanded.

“Given their state’s demographic shift, California politicians have no incentive to work with Washington,” writes David DeVoss in the Weekly Standard…Blue state… California is home to about a quarter of the country’s 11 million illegal immigrants…

Nor is it certain that the sanctuary order will fare any better under court challenges than has the temporary travel ban. Last year, a federal judge in Illinois ruled that it was unconstitutional for the Department of Homeland Security to force local jails to detain suspected undocumented immigrants without a warrant. And in a 1997 Supreme Court decision, Printz v. U.S., a 5-4 majority held that the federal government “may neither issue directives requiring the States to address particular problems, nor command the States’ officers, or those of their political subdivisions, to administer or enforce a federal regulatory program.”

Sanctuary cities are more of an effect than a cause of illegal immigration. The failure of the federal government to pass comprehensive reform has left states and cities fending for themselves. A provocative executive order might fulfill a campaign promise, but it won’t solve the underlying problem, which is an immigration system that is ill-equipped to serve the country’s economic and security needs in the 21st century. That will take legislation and leadership.

This is a pro immigration piece from politifact. It estimates that 21.9% of Federal Inmates are Illegals in 2016. Which is down from 30% in 2000. Whether that’s from reduced enforcement or less crime isn’t known.

A San Antonio congressman, already on record in support of Donald Trump for president, told Texas delegates to the Republican National Convention that Trump’s on target characterizing some immigrants as criminals. U.S. Rep. Lamar Smith said at the...

We have a process to address needed changes to law. If you think that immigration law is wrong, there is a legitimate system in place to change it. Aiding criminal activity and defying federal law isn’t it. It would be like a city declaring it wasn’t going to enforce the ban on automatic weapons and letting anyone there have and carry them. Or maybe a city will decide not to enforce anti-discrimination federal law. Could you imagine the rage from the left if that happened?

Thanks for the link. I wondered about the numbers. Counting sentences versus counting inmates. When you have illegals often making a very short stay based in an immigration related sentence, you get some really different numbers. That makes more sense.

The article says that immigration is down and crime is down. That doesn’t actually do much to refute the immigration causes crime narrative.

The way I see it, defund the cities and hold the officials accountable to the law. The end.
It isn’t that illegal immigration brings criminals, which of course it does to some degree at least. It’s that those who benefit the most, do it on the backs of the illegals. The Coyotes and other criminal elements that feed off of illegal immigration are counting on the sanctuary cities to continue their brutality on the least of God’s people. These organizations are guilty of unspeakable crimes, emboldened by leftist, kick the door down mentality.
Legal work visa’s and legal immigration avenues with a vetting process helps people on both sides of the fence. Sanctuary cities should be held accountable as accessories to the crimes committed by the illegal immigrant trade. Every murder, extortion, torture, malnutrition, etc. case enabled by them, committed by the illegal immigrant trade criminals, they are accessories to.