So this story just got a whole lot more in depth. The Obama era DOJ and FBI were investigating all of the actors behind the Uranium One deal long before (2009) the deal was allowed by the Department of State and several other Federal agencies.

This story ties up all the big names: Holder, Mueller, Comey, Clintons. The link below has copies of affidavits, warrants and plea deals. Wth is going on?

Before the Obama administration approved a controversial deal in 2010 giving Moscow control of a large swath of American uranium, the FBI had gathered substantial evidence that Russian nuclear industry officials were engaged in bribery, kickbacks,...

Department of State (and the rest of the Feds) knew about the investigations and approved the deal anyway.

It’s probably this. I might not be the most worldly guy, but bribery and extortion seem to be more often to happen than not in high level Russian govt matters.

@loppar I’d actually really like your thoughts, as you always seem to be well read on Eastern EU political structures.

@loppar I’d actually really like your thoughts, as you always seem to be well read on Eastern EU political structures.

Russian meddling/influence or however one may call it is a huge problem for several reasons:

Government mandated bribery - there are no “independent businessmen” in Russia, pretty much everyone, from the biggest oligarch to the lowly manager in let’s say an oil company is working for the FSB. It’s a “securitocracy”. Therefore, everyone is connected, to use the mafia analogy. And they freely dispense vast quantities hard cash under orders from Putin or his cronies. A couple of hundred thousand for Bill Clinton’s speaking engagement? 50k for Michael Flynn. Barely registers on the radar. A 100 million for the Hungary’s PM to vote against NATO?

That’s the crux of the problem - individuals in the West are susceptible to Russian bribes because the lines are blurred, there isn’t the us vs. them mentality anymore. Some friendly Russian businessman offers you several millions for an innocuous business deal, supposedly not related to politics. But in Russia, everything is politics, whether it’s software, or nuclear industry… So yeah, I have no doubt the Clintons took the money.

When US government institutions have installed antivirus software from Kaspersky lab, they have acquired it from a rank-an-file KGB officer, graduate of the notorious intelligence section. And when you’re a Chekist (KGB), you’re a Chekist for life…

Incidentally, that’s how they call each other, Chekists, after Cheka, Stalin’s secret police, predecessor of the KGB.

There’s a bizarre anecdote from seven or years ago when one “businessman” took out a full-page ad in the Russian edition of Forbes in which he complained how a fellow Chekist businessman brought him to court over a business deal gone wrong, instead of resolving it internally. Putin was furious and had the guy arrested.

Seriously, consider this for a moment, software in US government agencies from this guy?

Everyone that Bill Clinton, Donald Trump, his sons or his team contacted through regular business dealings were FSB. Including the alleged whores in Moscow. Report says missile service commander drank too much, fraternized with women in Moscow.

My favorite paragraph from the article:

“A tobacco store lady talking about physics in the wee hours of the morning doesn’t make a whole lot of sense to me,” he said in an interview with Air Force investigators, according to the report. “You need to watch out for that because that’s just like our training says, you know, people are trolling for information.”

Didn’t it always seem odd that Obama never made a public condemnation of Trump for “Russian collusion.” A guy that is vocal on everything is surprisingly silent in this instance.

I guess that reset button worked for the Clintons

The question is: “Why?” I know the Russian people are used to really oppressive regimes, but why put up with this as a populace? If what you describe is accurate then the state still controls the means of production. They’re still Communists in a sense.

The question is: “Why?” I know the Russian people are used to really oppressive regimes, but why put up with this as a populace? If what you describe is accurate then the state still controls the means of production. They’re still Communists in a sense.

The Russians basically struck an unspoken deal with their rulers, the deal a certain Thomas Jefferson warned about.

In order to understand this, you need to understand how the Russians dealt with the trauma of the 1990ies. In less than a year, from a drab yet safe existence in one of the two world’s superpowers they went stumbled into basically apocalyptic conditions.

Alongside the old Soviet Union pretty much all government functions collapsed, wages were in freefall, society broke down and a state of complete lawlessness occurred.

Wages for educated professionals went down to a few dozen USD, drug dealing gangs clashed in massive shootouts with AK 47 and sometimes APCs stolen from the Red Army, the country was in throes of an opioid epidemic, HIV/AIDS rates skyrocketed, murders and kidnappings were basically the only profitable industry. You basically couldn’t walk the streets of Moscow.

Not only that, but 99% of the population was not mentally prepared for the market economy. All career prospects, values and belief systems collapsed overnight. And the President Yeltsin was an alcoholic and a laughing stock of the world.

Enter Putin and his coterie in 1999 - the KGB crowd seized total power, started killing off/imprisoning opponents and offered the Russian population a grand bargain - unchecked rule in exchange for increased living standards. And it worked - high oil priced enabled between a quarter and a third of Russians to move from poverty into the middle class, the Second Chechen War and the killing of a quarter of the Chechen population restored some national pride.

Streets were cleaned up, both literally and figuratively (Moscow is much, much cleaner than NYC) and if you’re minding your own business, chances are you’ll never be exposed to street crime. Sure, “those brownish people” kill and stab each other in suburban ghettos and sometimes someone gets whacked mafia-style, but the general public is immeasurably safer.

Also, they enabled Russians to live in a society with all outward trappings of a free Western society. A middle-class Russian owns an IPhone and a Western car, shops at IKEA, drinks coffee at Starbucks, has all-inclusive summer vacations in Turkey or Egypt and in general lives in a Matrix style bubble comparable to the West, assuming he doesn’t cross over into the realm of politics where the real power and massive criminal organizations live.

Then all those nice facades suddenly drop and you’re confronted with the unrestrained dictatorship and it’s repressive apparatus. But most of the people accept the grand bargain of " prosperity and security" in exchange for looking the other way about massive corruption schemes and accepting they have no say in government matters.

The Managed Democracy: A How-to-Manual from Putin’s Russia | TIME.com

They are even hosting the 2018 World Cup. They must feel like a real country now.

That article. Wow. The response of all the people there “It’s corrupt, what are you going to do?”

We lose our minds when Nixon tried to steal democrat papers or when the IRS red-taped one set of activist 501c3 and rubber stamped the other side. That stuff in Russia makes our corruption and double dealing look like child’s play.

The scary thing is that I think an increasing number of Americans would, while being somewhat oblivious, settle for a similar deal.

In some ways they (we?) already have. And I’m talking about before Trump was even running for office. All Reagan had to say was that he didn’t remember and it was all good. He is still worshiped today. People bring up Benghazi but ignore Beirut.

The scary thing is that I think an increasing number of Americans would, while being somewhat oblivious, settle for a similar deal.

If you look at historical antecedents, autocracy or tyranny is usually imposed when the economy is booming, contrary to popular belief.

People are either distracted, don’t care or revert to “well, he/they did fix the economy” excuse.

or when the IRS red-taped one set of activist 501c3 and rubber stamped the other side.

Audit was just completed on that this month: And they’re not on the right

Lol. They are directly contradicting their 2013 report and wouldn’t name the names of groups. They also don’t say whether the lefty groups were subjected to the same inane information requests and 13 month wait times. They just say they were identified improperly.

Why did Lerner step down and delete all of her emails if that was on the level?

Just passing along an audit report that was completed and released (during a republican administration). If you choose not to believe it, so be it. But only 15% were conservative groups; the majority were left-leaning.

Just passing along an audit report that was completed and released (during a republican administration). If you choose not to believe it, so be it. But only 15% were conservative groups; the majority were left-leaning.

Yeah but what about that one time Dems did that one thing and intentionally worked with a foreign hostile nuclear superpower in order to be made the most powerful man on the planet?

Or that one time when Republicans took money for speaking fees and through their “charity” from the very Russian company that was buying 20% of US Uranium, while that deal was under review by that same Republican’s department and under FBI investigation for bribery and other crimes.

We have yet to prove Trump knowingly colluded.

It is now known beyond a shadow of a doubt that the Obama administration approved the Rosatom/Uranium One deal knowing that it was crooked, while at the same time taking money from Rosatom. 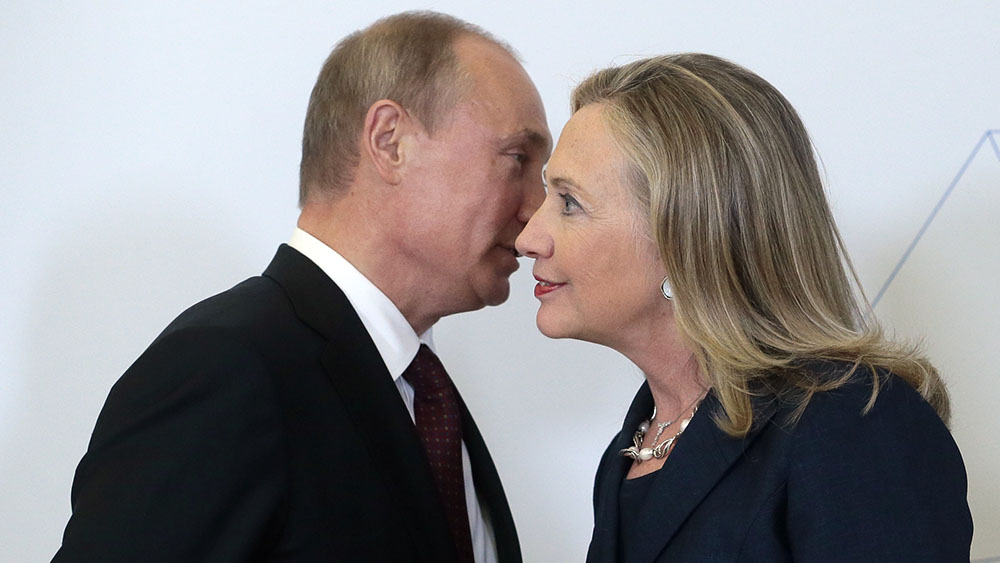 Yes, The Russia Scandal Is Real — And It Involves Hillary Clinton | Stock News...

Clinton Scandals: For well over a year now, the progressive left in the Democratic Party have tried hard to sell the idea that, a) Russia meddled in our election, and, b) that it was to the detriment of Hillary Clinton. After nearly a year and a half...

Or that one time when Republicans took money for speaking fees and through their “charity” from the very Russian company that was buying 20% of US Uranium, while that deal was under review by that same Republican’s department and under FBI investigation for bribery and other crimes.

Which I’m personally very upset about, to the tune of having been personally openly vocal about it

We have yet to prove Trump knowingly colluded.

We’ve proved Trump’s campaign knowingly colluded with a Russian govt employee. If that doesn’t mean Trump colluded to you, that’s alright by me. I’m not particularly hung up about it.