Roger Estep passed away on June 23rd. Roger was a tremendous powerlifter of the late 70’s-early 80’s-incredible build. One of my early lifting heroes.

Roger Estep was an awesome lifter and one of the first guys to box squat…Lifters in my generation should be very grateful to guys like him for paving the way. 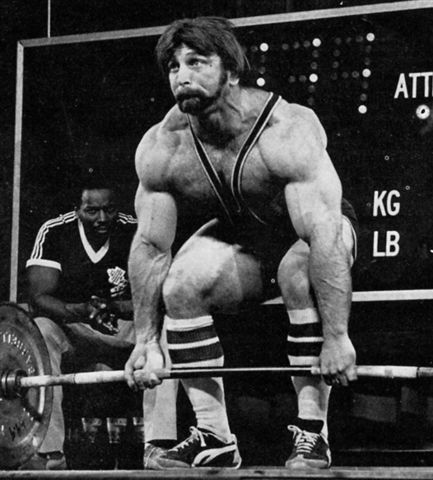 my place of employment in close to New Martinsville ,WV. a few of the guys i work with used to lift with roger when he worked out at luke iams gym in new martinsville. chuck dunbar also used to lift there.

[quote]Keith Wassung wrote:
Roger Estep passed away on June 23rd. Roger was a tremendous powerlifter of the late 70’s-early 80’s-incredible build. One of my early lifting heroes.[/quote]

Roger was a freind of mine. He died after numerous brain surgeries for brain cancer-he has been battling this disease for a good number of years and has had approximately 10 brain surgeries. Roger is not just a lifting legend-but was a true american hero. Roger was an army Ranger, purple heart recipient as well as the medal of valor winner who was injured by a mortar in Vietnam. I was lucky enough to be at Rogers wedding in 2003 as well as to look through Roger’s scrapbook some. Roger received a substantial bonus to play for the Cincinatti Reds.

Roger was just an amazing individual-he left behind a million plus dollar home in OC and so many freinds which you could tell meant far more to him then the material riches he so rightly had.

There is info there on his memorial service-scheduled for july I believe.