I’ve got one calluse undereath the pinky on my left hand that ripped open 3 days ago during a workout. It healed a little bit but I ripped it open again while doing cleans. Anyone have any suggestions as to how to cover up this calluse so I can lift effectively now, and how I can prevent this from happening again?

Dude, gloves. I realized this after tearing open the same spot four weeks in a row while doing deads. Annoyingly, I started to have to cut my deadlifts short because I couldn’t get a proper grip with that hand.

Callouses are a part of lifting, my friend. Some around here view them as a badge of honor.

Them ripping off is also going to be a common thing. At least one of mine rip off whenever I deadlift or DB row. I feel kind of sketchy pulling them off and flicking them into a corner (my gym is a pretty clean, well lit place), but there ya go.

Whenever one rips off hardcore (blood and pain when holding weights), then I wear gloves for the painful exercises (on both hands, naturally) until it heals up.

It’s a small price to pay for the privilege of being able to lift, I guess.

Start filing or cutting them down before they get too big, preferably with some warm water handy.

If they’re still attached somewhat, I like superglue to glue them down, then wear gloves until it heals up. Filing them down every week or so helps a lot. 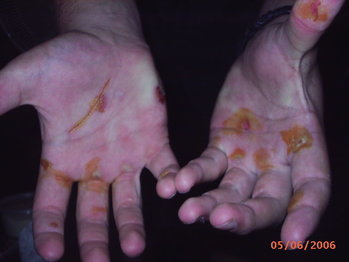 Every single one of theses has hardened into leather thats very tough.

[quote]Fuzzy-47 wrote:
Every single one of theses has hardened into leather thats very tough.
[/quote]

damn thats nasty lol
I chalk mine up before any pulls. I find that the moisture allows my skin to fold and result in a bigger calluse.

[quote]Fuzzy-47 wrote:
Every single one of theses has hardened into leather thats very tough.
[/quote]

Besides, only pussies wear gloves.

This year I started having problems with repeating tears and then an infection, and so, I grew up.

Now I wear gloves. Life’s great. And my gf doesn’t flinch when I touch her anymore.

The other way is to manage your calluses regularly with stones, etc… Here’s a link on removing calluses that might be helpful.

Its not about being a pussy or anything, I dont care if people use gloves.

These were my hands after a very long and hard rowing camp, wthh nearly 6 hours of on water training a day.

Hands got very ripped up, and its out of pure trdition that no one uses gloves.

After, we poured methylated spirits onto them to clean and dry it out.

My hands have scabbe dover and are hard and Ive never blisters again.

when I was doing gymnastics, my hands would look like the above picture, just not all that at one time, thats just insane.
We kept our callusses filed down with a nail file, and covered them with tape while working out, and on bars we always used our grips, whether we had rips or not.

To cover them up and prevent pain, the best thing I found was liquid bandaid, the stuff really works great and won’t peel off. To actually heal them, preperation h worked wonders, i have no idea why but my coach had me do it, and it worked. I would say put liquid bandaid on in the mornings, using baby oil to get it off at night, then putting preperation h on it. That should get it healed. After that just file your calluses down, use chalk, and your hands will become like leather.

gloves are for girls.

keep them cut down and they will not catch and tear. i used to get bumps and then stupidly adjust my grip so it wasn’t on the bump but it’d be right on the edge and would inevitably rip taking a chunk fresh meat with it.

if you keep them flat though worst that will happen is you might abrade through the skin if you don’t use a good chalk cushion, but that’s no big deal. i only had to cut them back for a couple of months before they stopped getting bumpy altogether. now they’re just flat and sort of glassy.

don’t mean to take away to the OP, but since we’re discussing damage to the hands from activities…

what do u do if u’ve skinned your knuckles doing bagwork (boxing)? are u suppose to quit training (not weights, just bag) until they heal up, or do u just sanitize the hands and keep going as if nothing happened?

I can’t believe no one has mentioned chalk.

It’s easy to forget to chalk up your pinkies when you O-lift, but they seem to take the greatest beating after the thumb, at least when you hook grip. This seems to be especially true in the snatch. Just fill the busted blister up with chalk, squeeze a bar until it doesn’t hurt any more, and go back to it.

If that doesn’t work, fill it up with chalk, cover it up with a couple layers of white adhesive athletic tape, and then go back at it.

Sometimes it helps to tear off callouses after workouts, but for the most part (with oly lifts, anyway), you just need to make sure that you use chalk when you need it.

Yesterday I ripped off my biggest callous. It is a badge of honor. I was dropping DNA all over. I got a bandaid and wrapped it with Tape and kept on going. It only happens when doing rack pulls over 600+. I put on gloves and when it filled with blood I stopped. It happens.

I’m going to be 52 and I won’t stop the rack pulls. When I get heavy, I can’t use gloves. I pulled off callouses with straps. So what, I choose to live with it.

I take a Dremel tool to mine after showering. Make sure you keep it moving and keep it on the lowest RPM setting. If not, you’ll smell the burning dead skin before you feel it…

End result, callouses are there and smoothed out, but don’t catch or rip.

[quote]barryjenkins00 wrote:
Yesterday I ripped off my biggest callous. It is a badge of honor. I was dropping DNA all over. I got a bandaid and wrapped it with Tape and kept on going. It only happens when doing rack pulls over 600+. I put on gloves and when it filled with blood I stopped. It happens.

I’m going to be 52 and I won’t stop the rack pulls. When I get heavy, I can’t use gloves. I pulled off callouses with straps. So what, I choose to live with it.[/quote]

I sincerely hope you were doing these pulls in a home gym. If not, “dripping DNA everywhere” is possibly the most irresponsible thing I have ever heard of someone doing in this day in age. Blood is not easy to thoroughly clean up, and anything left over could easily infect someone else with anything you have in your system.

Wisen up if you are doing this around other people.