The man was a legend and always will be.

Ronnie James Dio (born Ronald James Padavona) has sadly passed away from his battle with stomach cancer. He was 67 years old. Dio made a name for himself when he fronted the Ritchie Blackmore led band Rainbow, who released their first album in 1975. After leaving Rainbow, Dio was asked to replace Ozzy Osbourne in Black Sabbath, to which he agreed. With Black Sabbath, he recorded two highly acclaimed studio albums in the form of “Heaven And Hell” and “The Mob Rules.” After leaving Black Sabbath, he formed his own self-titled band and became one of the biggest draws in heavy metal during the 1980s.

Dio briefly reunited with Black Sabbath in the early 1990s, releasing the “Dehumanizer” album before leaving once again to concentrate on his own band. Another reunion with Sabbath followed in 2006, this time under the new moniker, Heaven & Hell, reulting the acclaimed album, “The Devil You Know” in 2009. The band recently cancelled their tour dates in Europe as a result of Ronnie’s health.

Killswitch did it justice.

Dio has rocked for a long time.
Now its time for him to pass the torch.
He has songs of wildebeasts and angels.
He has soard on the wings of a demon. 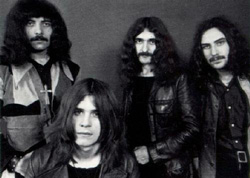 These are more recent posts and they say he hasn’t yet passed away.

One of the top rock vocalists of all time for sure. Saw him live in the eighties and what a stage presence to go along with the pipes. Gonna play me some Dio, Sabbath and a little Rainbow today!

These are more recent posts and they say he hasn’t yet passed away.[/quote]

Best wishes to the man, let’s hope it stays that way for a while longer!

Name of teh chick in your avatar?

I loved what he did in Rainbow. Plus, Cozy Powell was the drummer for that period that RJD was in the band.

Name of teh chick in your avatar?[/quote]

You’re right. Not a single serious news outlet has reported Dio dying.
What a great hoax for re-sparking his career, though.

Ozzy was probably secretly hoping it was true.

Its official now Ronnie James Dio has passed on.

"Today my heart is broken, Ronnie passed away at 7:45 a.m. [on Sunday] 16th May. Many, many friends and family were able to say their private goodbyes before he peacefully passed away.

"Ronnie knew how much he was loved by all.

"We so appreciate the love and support that you have all given us.

"Please give us a few days of privacy to deal with this terrible loss.

“Please know he loved you all and his music will live on forever.”

It was only a month ago that Dio, 67, spoke about his battle with cancer with the Artisan News Service on the “black carpet” of the Revolver Golden Gods Awards, which took place on April 8 at Club Nokia in downtown Los Angeles. When asked about how he had been feeling since he was diagnosed with the disease late last year, Dio said, “Well, I feel good and bad at times. It’s a long process. Chemotherapy is a… I never realized what a difficult thing it was to go through. It’s a real cumulative effect â?? the more you have, the more it piles up on top and it takes longer and longer to get over it. I find it very difficult to eat. I don’t like to eat anyway, so I guess that’s OK. But I know I have to. But this makes it very, very hard. But if you’re determined to beat it, then you have to go with what you believe is going to beat it for you, and in this case it’s that. I go to a great hospital in Houston called M.D. Anderson, which I think is the best hospital in the world, I have the best doctor in the world, Dr. Ajani, who I really trust and I really believe in, so I think I’ve done all the right things. It makes me feel positive about my life and positive that there is a lot more of it to live.”

Earlier this month, HEAVEN & HELL canceled its summer tour plans in Europe due to Dio’s treatment for stomach cancer. The band said in a statement that Dio wasn’t “well enough to tour this summer. We hope that everyone understands and want to thank fans and industry colleagues for their continuing support at this time.”

Ronnie James Dio had performed with ELF, RAINBOW, BLACK SABBATH, and his own band DIO. Other musical projects included the collective fundraiser “Hear 'n Aid”. He is widely hailed as one of the most powerful singers in heavy metal, renowned for his consistently powerful voice and for popularizing the “devil’s horns” hand gesture in metal culture. He was most recently involved with HEAVEN & HELL, a project which also included former BLACK SABBATH bandmates Tony Iommi, Geezer Butler and Vinny Appice. Their first and only studio album, “The Devil You Know”, was released on April 28, 2009.

This is massively upsetting. RIP Dio.

Man… it’s been a tough year for us metal heads.

R.I.P Ronnie James Dio - a true voice of heavy metal and one of the all time rock greats.

Dio was undeniably one of the greatest metal (and rock) vocalists of all time.

Rock on, Ronnie… Rock on.

On 25 November 2009, his wife/manager announced that Dio was diagnosed with stomach cancer:[13]
“Ronnie has been diagnosed with the early stages of stomach cancer. We are starting treatment immediately at the Mayo Clinic. After he kills this dragon, Ronnie will be back on stage, where he belongs, doing what he loves best, performing for his fans. Long live rock and roll, long live Ronnie James Dio. Thanks to all the friends and fans from all over the world that have sent well wishes. This has really helped to keep his spirit up.”
On 14 March 2010, Dio’s wife and manager Wendy posted an online update on his condition:
“It has been Ronnie’s 7th chemo, another cat scan and another endoscopy, and the results are good - the main tumour has shrunk considerably, and our visits to Houston (cancer clinic in Texas) are now every three weeks instead of every two weeks.”
On 4 May 2010, Heaven and Hell announced they were cancelling all summer dates as a result of Dio’s ill health.[14]
Dio died at 7.45am (CST) on May 16, 2010, according to official sources. [15][16][17]
Wendy Dio said on Ronnie’s official site:[18][19]
“Today my heart is broken, Ronnie passed away at 7:45am 16th May. Many, many friends and family were able to say their private good-byes before he peacefully passed away. Ronnie knew how much he was loved by all. We so appreciate the love and support that you have all given us. Please give us a few days of privacy to deal with this terrible loss. Please know he loved you all and his music will live on forever.”

Stomach cancer? Fuck that blows. I think I would rather have my nads fall off. On a plus side: Ronnie will live on throughout history.