I just finished week 12 of CT’s Guaranteed Simple Strength & Size program. I enjoyed it so much that I wanted to give a review to say thank you!

Background
I’m 33 years old and I’m 6’5" (you’ll see my weight below). I had surgery on my left hip to repair a torn labrum December 20th 2017. I struggled with the injury during most of 2017. I started avoiding things that caused pain and the list of things to avoid grew longer and longer up until the day I had surgery.

After surgery I was under restrictions for 12 weeks. During that time I ran a bastardized version of The Best Damn Workout Plan for Naturals. I was unable to flex my hip past 90 degrees for all 12 weeks. I was unable to do any external rotation for the first six weeks. I was unable to load my left leg for most of the 12 weeks. Towards the end I was allowed to do body weight lunges. I was stuck using cables and machines for those 12 weeks and did the best I could to maintain what I had before surgery.

Once I was released to train like normal I took a week or so to get back under the barbell. I ran a test week for this program to get an idea about what weights I should use.

I didn’t exactly go by percentages to get my week one weights. I knew what weights I wanted to hit by the end of this program and did the math backwards from there. I picked realistic numbers—strength I’d had at one point and hoped to regain.

I chose to run this program because I needed some regulation during my comeback. I didn’t really know how much weight to use or how much volume to do. I felt lost. This program told me what to do and gave me a steady approach to get back under the bar without overdoing it. This program required patience, but it paid off.

I took measurements (in cm’s) before surgery, again when I got released to train normally, and this morning. Here are the results and below that you’ll find my strength improvements. 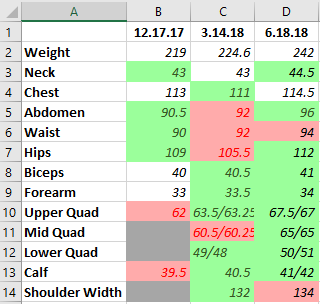 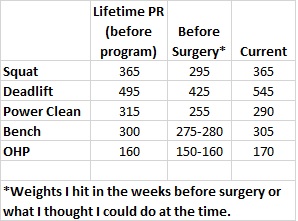 Conclusion
I just want to remind everyone that I started this program in the tank. I wish I could say that I added 120 lbs to my deadlift in 12 weeks but it’s not true. But you can see my previous lifetime PR’s and see that I’ve still made progress. I’ve never been at or near my PR’s in all three lifts at the same time (squat, bench, dead). I’ve only reached those numbers by focusing on one lift at a time. I can say that I’m stronger all around right now than I’ve ever been in my entire life.

Thanks @Christian_Thibaudeau for taking me back to the basics and getting real results!

I’m changing my focus to my conditioning for awhile but once I finish that I plan to go right back to this program.

And for those of you curious about how I actually look, check out my training log for photos.

Im about to finish this program, and I actually broke through some PR and amazed, but I do not know what program to do after this one specifically for cutting but also minimizing losing my gains because the thibarmy program advises to be bulking. Any recommendations will be greatly appreciated. @Christian_Thibaudeau @Frank_C

The best way to maintain muscle is the same way you developed it. You’ll just have to assess your recovery since you’ll be in a deficit. If you’re struggling to recover then drop the volume a bit and reassess.

Here’s an idea that I haven’t tried so take it for what it’s worth. If you want to do SGSS again then perhaps use the same weights or start even lighter and run it again. Maintaining performance while losing weight is still a form of progression. You might not hit lifetime PRs but you could hit bodyweight PRs.