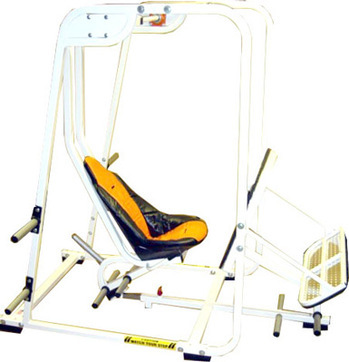 What is next…Swing your way to fitness!

The cor evolution is now here! The web page, www.mycorevoltion.com isn’t even working yet but I just saw the infomercial on channel 96. It came on right before the shark steam mop.

We have a reverse hyper in my gym, it’s a great piece of equipment for the hammies, low back and glutes but…as we always kid “The reverse hyper cures cancer”.

The infomercial showed Lou, and deebel amongst others, Louie looks really heavy. They claim the reverse hyper, (which is nothing more than a single plane of motion, posterior chain isolated exercise) is great for “everybody’s back” and is “comfortable”.

Also, one of the last things that somebody with a low back problem needs is a machine like the reverse hyper which encourages some of the worst compensation patterns on the planet, particularly in the average guy who already over compensates with his low back to make up for lack of hip extension strength in the glutes and hammies.

No infomercial can give you a 12 hour lower back physiology and biomechanics course. That’s why they come with a disclaimer to talk to your doctor first before you start an exercise program.

As for this product, I’m no longer recommending it. ( I’m Deebel by the way). Not because of any OMG you’re back will explode, but because a good friend asked me to help him out. you want to know why i’m not endorsing it now, PM me.

If you want a reverse hyper, buy one from Lou (my buddy) or Dave Tate. the product for sale in the infomercial is okay for your average regular Joe to use at home.

To go into every single medical reason why someone shouldn’t use a reverse hyper isn’t the scope of an infomercial. Again, this is why there is a disclaimer.

In my 20 years of treating people, most can benefit from some light strength training in their posterior chain muscles. Few patients have disc issues so bad, or stenosis that bad that this would hurt them. Done with lighter weights of course.

As for altered movements patterns, your average regular patient is so weak in their day to day lives, that almost any exercise would be good for them.

When you treat people on a day to day basis, you’d be surprised to see how many would find it taxing to walk 1/4 mile. The last thing you need to worry about is movement patterns when they are fat, weak, and have no aerobic fitness.

Funny thing is the few people that have done some simple lower back exercises such as this, simple scapular retraction exercises for shoudler issues, and so on have shown great improvement.

This is simply a home model machine designed for basically a weak person.

Is that it in the picture? I saw the infomercial and it didn’t look like that. It caught my interest, but when I checked online there was no website.

That’s not it, that’s a plyo swing.

Remember this piece of equipment is designed for your average Joe, not the serious guy. For example, I have a 75 year old patient with a variety of problems who bought a total gym for 40 bucks at a yard sale. He’s doing 5 or so minutes a day of some of their basic exercises.

He feels better, more limber, and can drive a golf ball better. Yes, he has some shoulder impingment and some arthritis in his lumbar area and previous disc issues, but he got some help.

Your average person will hardly use any exercise machine, let alone do enough to hurt them. It might sound crazy to some people here, but movement patterns and such mean nothing to these folks one way or another. It’s a victory to just get them to walk a little farther every day.

Or you can lay over a tall bench and lift your own damn legs up this way for free rather than pay a lot of money to use your own bodyweight for exercise. Jeez. It’s not even as useful a total gym, since you can’t set the thing to make the weight lighter - which would be helpful in prgressing those folks severely out of condition…

[quote]skidmark wrote:
Or you can lay over a tall bench and lift your own damn legs up this way for free rather than pay a lot of money to use your own bodyweight for exercise. Jeez. It’s not even as useful a total gym, since you can’t set the thing to make the weight lighter - which would be helpful in prgressing those folks severely out of condition…[/quote]

The laying over something is harder than it looks. Not everyone has an appropriate counter top etc. and so on. It doesn’t matter though, since I’m not endorsing it anymore.