Picks?
I’m a die hard Longhorn fan, so i’m picking my Horns to win. I haven’t been very impressed with any of their wins this season, but i’ll be looking for them to wake up and make some big plays. I’m saying Texas by 10.
Anyone going to the game? Any fellow Horns here?

Oklahoma is going to take it, McCoy and Shipley have been doing well, but against average opponents. Bradford looks like he’s coming back with vengeance (can’t blame him after turning down millions and then getting injured), and I think that will be the edge.

Fellow Horn here, I think it’ll be close but of course I’m picking Horns on top. Ultimately I’m just not really impressed with how our offense has played in the first half of any of our games this year, I think if they pull that shit again against OU, they won’t be able to recover. Hopefully they’ll peak this week, and get the job done.

Sam is back in full force, Broyles will start, D looking good, hope we can pull it all together.

Keys for OU: TD’s in red zone, not FG’s, don’t let Colt run all over us, especially on 3rd and long like he did last year, don’t run stupid plays knowing they are highly unlikely to work, like running a draw play on 3rd and 12 from our own 15 yard line. Our pass D will give up big plays like always, but we need to limit them or preferably eliminate them altogether. Both teams are gonna put up points, just like last year, but OU will hold on and defeat Texas due to defense.

I honestly don’t see how Texas has a chance in this game. They have zero running game. Zero. That will make their offense very one dimensional against OU. McCoy seems to get off to a slow start in every game. Fortunately, Texas hasn’t yet played a team that can capitalize on that fact and put the game away before the second half. Tomorrow will be a different story. Look for Bradford to slice up the Texas secondary tomorrow while Texas flounders in the first half. I think it will be something like 21-3 or 21-7 going into halftime. OU will then come out with its running game in the second half to choke Texas off. Final score: 28-17, OU.

I’m a hardcore Texas fan but this game is probably going to break us… our defense has been great at keeping us in the games all year… but with no running game and Mccoy over throwing everyone this is going to be rough. I see a close game, don’t think either team is going to win by much… and Texas def can’t win this game on heart so we’ll see

Like I was telling a friend, we lose every game but beat texass…it’s a good year. I’d love to spoil but predictions are bad luck.

we got robbed last year… I’m gonna kill someone if we really lose, seasons jacked for sure if we do… Texas won 4/5 so lets hope they get another

I agree that Texas has looked very bad in the run game, and not so good in the pass. Defense will be key to a W, but I know the Horns have a lot more talent than they’ve shown. They just haven’t been playing up to their potential, which is pretty disappointing.
I saw OU-Baylor and wasn’t very impressed with OU’s offense. I know they’ve suffered from some pretty big injuries, but I don’t see that high powered offense showing up tomorrow.

I’m hoping the Sooners win just to rub it in to my fellow workmate since he is a Texas fan. 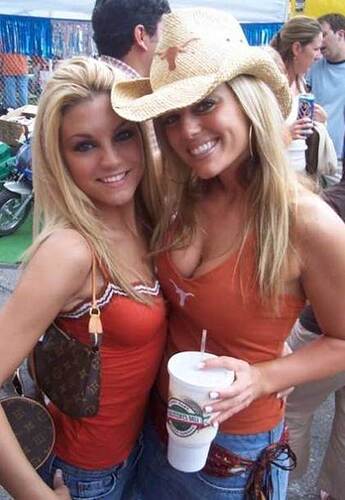 Texas’s only hope of winning would be to run the wildcat offense with these girls in the backfield, naked. That would be a distraction.

Like I was telling a friend, we lose every game but beat texass…it’s a good year. I’d love to spoil but predictions are bad luck. [/quote]

But it’s damn nice to beat them.

I’m shocked no one has mentioned how weak OU’s defense and O-Line are this year. Yes,Texas has no fucking running game(I hate their play calling at times) and are such slow starters. But if their offense is in balance,I don’t see OU shutting them down…if anything mistakes on UT’s side will cost them. I think this game is really going to be a shootout…but with no more than a margin of 10 points…in UT’s favor

21 offensive yards are you kidding me, our offense has been dominated in the first

[quote]Amiright wrote:
21 offensive yards are you kidding me, our offense has been dominated in the first [/quote]

Just goes to show how poorly the ranking system in college football works.

[quote]WestCoast7 wrote:
Amiright wrote:
21 offensive yards are you kidding me, our offense has been dominated in the first

Just goes to show how poorly the ranking system in college football works.[/quote]

This game is so unstable, I have never seen so many turnovers and erratic play. This is a gold ol’ fashioned slobber-knocker out by the wood shed. This is a fist fight for sure. The Oklahoma defense is playing very well.

[quote]MaximusB wrote:
This game is so unstable, I have never seen so many turnovers and erratic play. This is a gold ol’ fashioned slobber-knocker out by the wood shed. This is a fist fight for sure. The Oklahoma defense is playing very well.[/quote]

Both defenses are playing well…that’s the only thing keeping us in the game.