Big Ray Williams narrowly misses his 1080lb squat attempt at USAPL Raw Nationals 2017 and almost gets flattened as he misses the rack on the way back. The spotters are unable to cope with the load and Williams is bent over as everyone rushes in. Luckily the bench pins/racks saved the day. Scared the shit out of me tho. 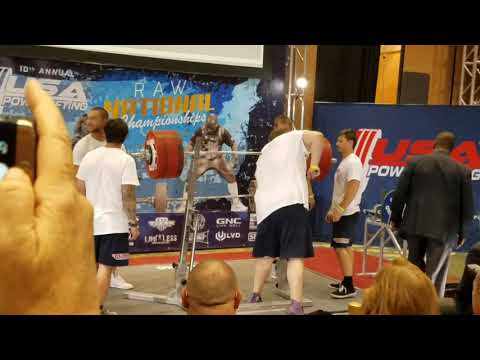 Brings back memories/nightmares of some of the spotting at IPF Worlds 2016. 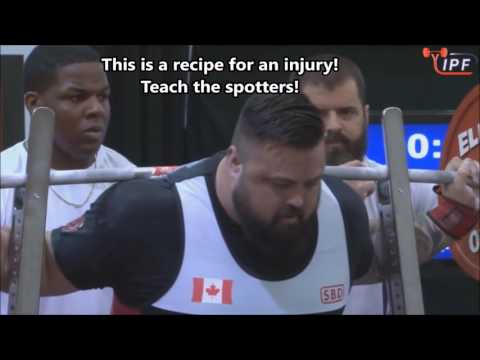 It seems to be a bad week for WR squats with Andrey Malanichev failing pretty much the same weight (490kg) in knee wraps at Pro Raw Big Dogs 2 except his safety was never in any doubt with the monolift safety straps and about twice as much muscle mass spotting him than Williams had. 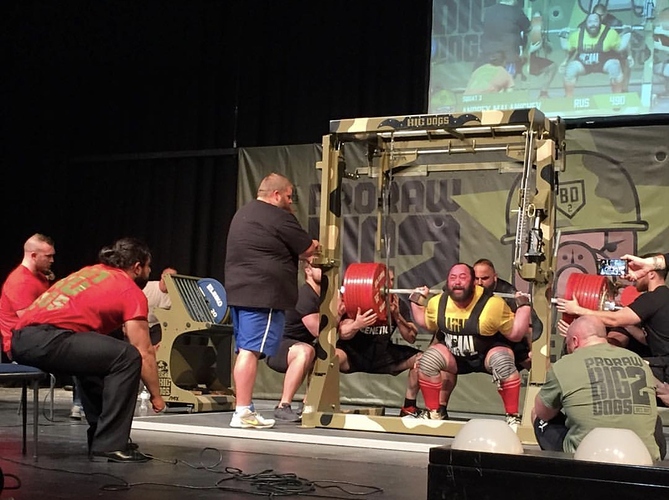 What does the USAPL have against racks/straps/safeties etc.?

FFS for a SHW WR Squat at least get some more dudes spotting or at least bigger dudes. The poster boy for the whole show almost ended up flatter than a poster.

Anyways what a beast of an attempt tho. Almost got it too. 490kg in just sleeves… dude needs to throw on some knee wraps and see how he goes.

Always been hard to compare raw and raw w/wrap squatters but with these kind of numbers does Ray Williams have a case for being the best powerlifting squatter of all time?

Saw a clip earlier but it didn’t show missing the rack. He’s so tall spotters are almost lifting the weight over their head. I never get why the spotters are always like 150lbs. They should have a bodyweight requirement over 200 lbs to be a spotter might be a good idea.

Zahir Khudayarov dumped 480. Mono didn’t flip but spotters finger got broke I think. Probably have to be a decent chunk greater than current raw world record weights to flip a mono. 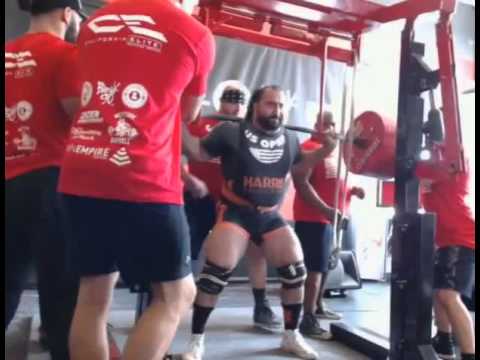 How about dumping the bar tho? Even if you are losing balance and it’s unavoidable it’s still considered a dick move. Maybe screaming DUMP will give the spotters enough warning. Spotters still have to be ready for anything tho.

I thought I heard it and saw it before I think it was a training video with 1000+ squat. Not positive

I never get why the spotters are always like 150lbs. They should have a bodyweight requirement over 200 lbs to be a spotter might be a good idea.

There’s more weight on the bar than all the spotters combined.

I saw a video in @MarkKO’s training log where he failed a squat and the monolift tipped over. It must depend on what exact model is being used, but some monolifts can definitely fall over or flip and if 1000+ is on the bar then good luck with that.

As for Belkin dumping that squat, would it have been better if he held on and fell backwards with the bar? He didn’t have the bar placed properly on his back, add another 220 to the bar weight and it certainly won’t look better. There is a video of Konstantin Pozdeev failing a squat and jumping out fro under the bar (look it up), that’s the kind of shit that is inexcusable. Maybe he saw the video from 2016 IPF worlds before the meet and feared for his life.

You have to give credit to the meet directors for this year’s IPF worlds in Belarus for not fucking up with the spotting, they had 7 spotters on the platform for a lot of the squats and no accidents or near accidents that I have heard of. I thought they changed the rules for number of spotters on the platform, I looked it up and it’s still a maximum of 5 but I guess they don’t give a fuck ain Belarus.

Zahir didn’t look like he intentionally dumped the bar, it looks like the weight shifted backwards and he lost his balance. I could be wrong, only he can tell you why he dumped it. When you have 1000lbs rolling off your back there is no way you can hold on.

This is why I hate spotting.

I don’t know much about the USAPL; who is that announcer, and WTF is he wearing? Is that a pirate suit?!

That’s some guy named Gino, he goes to all the big IPF meets. I don’t really understand what he’s all about, he always wears some funny outfits.

@chris_ottawa yes it did, although I fucked up and didn’t have the dude spotting me so I basically fell backwards and the bar fell a couple of feet into the straps. I think it was that impact that caused the tilt. I’ve failed in that mono where I’ve just sat the bar on the straps and it hasn’t budged.

So what do you think would happen if someone dumped 1000lbs in that monolift?

Depends how hard. If they just bottomed out and pretty much set the weight on the straps I don’t think there’d be an issue. If they actually dropped it, big badaboom.

That’s what I’m saying, it looks to me as though certain monolifts can flip and others can’t. Look at the video above of Zahir dumping 480kg. The monolift shook and tilted slightly but it wasn’t in danger of flipping or falling over.

That’s something worth looking at