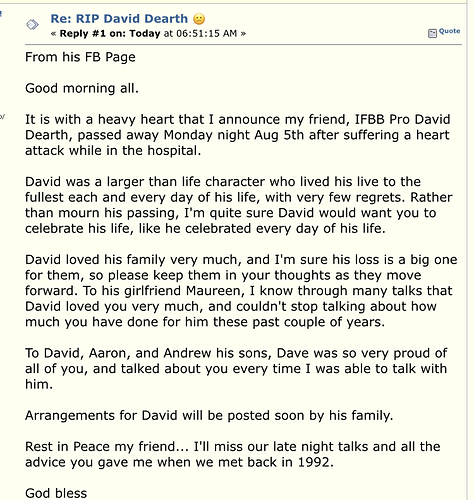 I know we can’t link to other sites so I screen shotted this.

Dave was one of my favorite characters (good description) when I started really following the sport in the early 90’s.

Thats a real shame.Another one of the greats from the late 80’s early 90’s.R.I.P

One of the WBF guys. Sad to hear. He had a really nice streamlined physique for that era. 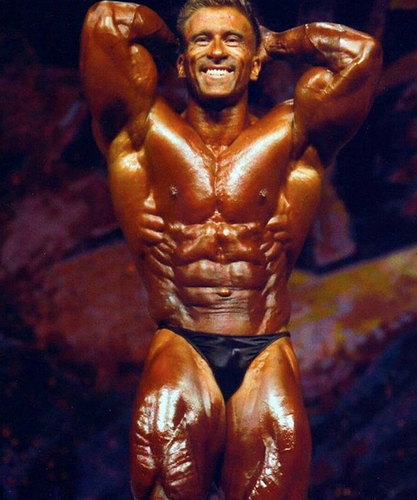 Dave was one of my favorite characters

And that was even before he had the Harley Quinn tatt! 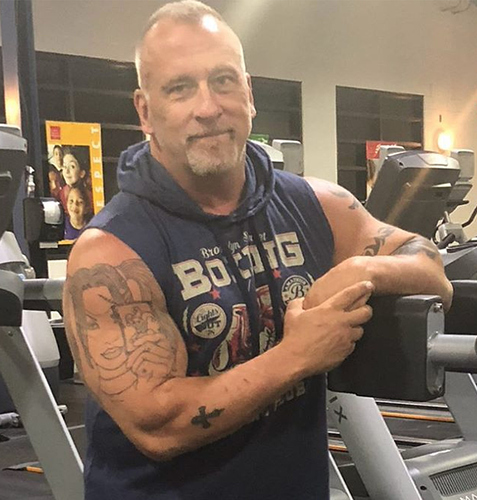 Very sad. He also was one of the guys I kept up with in the early 90’s. As a side note, I recently watched a couple of pretty interesting episodes with David on RxMuscle.

Damn … one of my favorites back in the day!

So I went down the rabbit hole…

…googled, (and very quickly) found a forum thread on a site that shall not be named from 2014 -not sure how he’s survived this long to be honest. Wow, this stuff should be posted as a “scared straight” story of caution. Sounds like David Dearth literally found peace in passing.

And if you base it on results, David Dearth actually had reason to use gear.

What exactly were his previous struggles? Was this the guy who had drug and psychological problems? I think I’m getting him mixed up with Paul De Mayo (tragic loss regarding both) @punnyguy

From what I can percieve, David had an abcess of his bicep, during surgery had a myocardial infarction, I’d assume the toxicity of the anaesthesia probably ruptured a piece of plaque and/or precipitated a clot causing a heart attack, or he had a weak, enlarged heart and under the stress of the anaesthesia his heart just stopped beating… That or adverse reaction to general anaesthesia

Google his name, click on the first linked article, when you get to “numerous surgeries”, clicking on that will get you to the 2014 thread. Here is a brief excerpt, apparently copied from Dearth’s FB page:

“This will be my 29th surgery during my career. 11 just on my knees. I took the whole “go hard or go home” thing to the extreme. I love to train and I love to train as hard as humanly possible. I read on Facebook people saying they train all out every workout all the time. Few do but most do not have a clue. Anyone who knows me or has trained with me will vouch for my intensity/insanity.
My whole life all I’ve heard is “someday you’re going to have to pay big consequences for the insane way you’re living your life”
They were right! These past 4 years have been the most difficult years of my life. So many surgeries, going from a no worries income to a check to check income…”