edit: Can someone translate?

Yeah, I was surprised by his footwork. Prove that strongmen are faster than bodybuilders. It was a joke.

I love you OP for posting this. Seriously. I LOVE YOU.

Off to dance class… 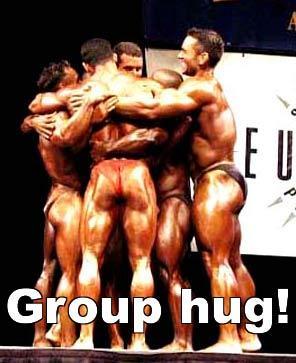 If only more people would love rather than hate on this site.

[quote]swissrugby67 wrote:
If only more people would love rather than hate on this site. [/quote]

This may be the funniest thing I’ve watched in a long time. In a good way.

Love it when he’s trying to stretch with those ballet chicks–it’s completely ridiculous watching him trying to pull off those moves.

Ya’ll never seen that before?

edit: Can someone translate? [/quote]

HAHHAHAHA this is some of the funniest shit I’ve seen in ages!

They basically start of saying they had to help him a lot with learning ballet, then the judges commented on how swift he is for his weight and on how easily he threw the dancer around.

Those women are all over him though, seriously - compliment after compliment.

yes, that was great. he looked like he knew what was going on. It’s funny at the end in the interview…all the other guys are wearing tuxs etc, and he’s in a cutoff.

Did he win it?

the chick in the green. Hot.

DAMN, he was good! Does anyone understand what the judges were saying?

Mariusz offers to throw around the first presenter after they finish dancing, due to the presenters comments.

Brunette in white top said he had 2 things wrong - top half of the body was too stiff (he says his chest is 3 times the size of hers in a joking way) and too many “rock and roll” moves. She asks his weight (140kg) and says he is swift for his size.

That chick in the would get it over and over till she screams “Tak! Tak!”. (Tak means yes…)

You should do the commentary rsg.