PS3 or XBOX Keyboard and Mouse

Now I have been researching what is best for me since I have a PS3. I want the keyboard and mouse experience type game play for FPS. I hate controllers.

The only real thing I have come across is this … 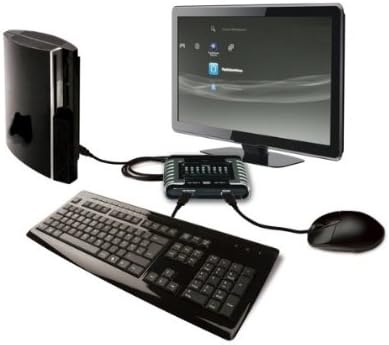 Anyone else care to chime in?

There are also reviews on Youtube but its filled with people taking trash so it hard to get a good honest opinion.

^Trash talking like it’s not fair to other PS3 users or doesn’t work as well?

If you hate controllers, game on a PC.

[quote]Fuzzyapple wrote:
^Trash talking like it’s not fair to other PS3 users or doesn’t work as well?[/quote]

[quote]RSGZ wrote:
If you hate controllers, game on a PC.

I used to game really hard on a PC. But its time to face facts. More games are dev’d for consoles then PC’s anymore.

I like the games I have played so far. I just want what I am use too. Its really frustrating to play at a level below what I am capable of when I just can’t get use to the controller. It would be easier for me to get a keyboard and mouse and plug in an play away.

Not so sure about that. What’s an Xbox besides a specialized PC anyway?

Skyrim looks better on PC than it does on Xbox because computers have long passed consoles. For the next year or so, until the next gen consoles come out, it should stay this way.

Not to mention stuff like WoW and Diablo 3 is not available on console at all.

I like to sit in my recliner with a controller.

I hate sitting at a computer, I do it enough at work.

[quote]BradTGIF wrote:
I like to sit in my recliner with a controller.

I hate sitting at a computer, I do it enough at work.

Wireless controller, and an HDMI cable.

[quote]RSGZ wrote:
If you hate controllers, game on a PC.

I used to game really hard on a PC. But its time to face facts. More games are dev’d for consoles then PC’s anymore.
[/quote]

The only annoying thing is that most console to PC ports are terrible (mouse acceleration, low texture resolution, lots of areas where the games look awful because a console can’t handle as much as a modern PC but the developers didn’t bother improving anything for the PC port, retarded control schemes, bugs, push the start button/insert coin ;).

Anyway… Be careful with the mouse-for-consoles kind of thing… Console controllers rely on mouse accel (well, controller accel I guess) due to their limitations.
That will drive you absolutely crazy when you’re using a mouse, and unless the console game you want to play was developed with a console mouse as a controlling option in mind, I doubt that you can turn it off… Unless maybe you can do so via the console OS?

That being said, I have never tried a console mouse… It’s about damn time they come up with mouse and keyboard support for consoles, at the very least for the next generation… There is absolutely zero reason to force people to use the clumsy controllers for shooters, strategy games, FP RPG’s etc…

XIM3 is definitely something to look into if you are into keyboard and mouse play.
For those who prefer a controller,google trackball controller. Right now there is a great one for XBox 360 (none for PS3 yet as far as I’ve seen).

I’m still using the standard XBox 360 analog stick controller, as I’m pretty comfortable with it. However, many people I play online with have switched to XIM3 or trackball controllers, and they swear their speed and accuracy have improved dramatically.

I’m thinking of looking into the trackball controller 1st.