For several months I have experienced pain in my right hip flexor when squatting.

It started when I built up to a comfortable new gym max of 365 on the lowbar squat. Began as tightness, but soon became stabby-painful when I tried to begin my next training cycle. I still had the strength to lift the weights, but it was very uncomfortable.

I dropped back down to just the bar, and tried to build back up in sets of 10 until the pain was gone (my normal rehab routine), adding a bit of weight each time. After a few sessions, I reached 115-135 but it remained painful.

After months of stretching, mobility drills, some rolling, and a chiropractor visit I am officially frustrated and need advice.

The pain is mostly gone, but presents as a feeling of someone holding the brake pedal down on the concentric portion of my squats.

If I lift my knee straight up and forward, I feel no pain. However, lifting it up and a 45 degree angle or straight to the side creates a small sharp pain where the thigh bone meets the hip.

Deadlifting seems unaffected by this, and benching is fine. I do have some history of adductor strains and tightness, but have focused so much on mobility/flexibility that I am now mere inches away from full front and side splits. I was able to set a small power clean PR in the meantime, so that seems unaffected too. And I have also tried extended rest doing nothing at all, with no positive result.

Has anyone else overcome this issue? Any help is GREATLY appreciated

I know this is sort of vague, but it sounds like “hip Impingement.”

Basically, your squat motion causes your hip joint to move in a way that irritates the joint. You can do lots of stretches and rolling and things, but then you squat and re-aggregate it.

What is your stance like, where do your knees go, and how low do you squat? How can you move(squat) in a way that is more like the pain free knee lift you described? Often if the feet are too narrow or too wide it’s bad, and more medium feels better. Or if the toes are turned way out and the knees don’t track exactly over the toes.

My stance is fairly moderate, feet just wider than shoulders, with feet turned out about 20-30 degrees.

I have experimented with the stance, and discovered that wider leads directly to more pain. A very narrow stance gets rid of a lot of the pain, but becomes an absurd movement to progress with because I have a fairly wide pelvis (back would have to round out to reach parallel).

My depth is an inch or two below parallel at least. I was gearing up for a USAPL meet this year, so I always wanted my depth to be well under parallel for judging.

Alright. What else is different or has changed?

Did you always squat low bar? Maybe the forward torso lean or the hips travelling back doesn’t agree with you.

Were you having this problem before you started preparing for the PL meet? Was the below parallel squat a change? Is it causing the irritation? Are you unconsciously slowing your squat descent down, or maybe losing tightness at the bottom to “sink” to depth?

I have always squatted below parallel, but the switch to lowbar is new actually. Previously I have only ever squatted highbar, but did a 2 month trial of lowbar and liked it (again, competition oriented).

You might be on to something. But does this mean I’m not structurally cut out for lowbar, or do I simply need to do more to adjust to the form? Any ideas?

Speculation
It is possible that you’ve rushed into using the new technique, pushed the weights fast, and some lacking muscle is slacking.

Like you need more hamstrings or abs to stay a little more upright, or more glutes or something.

It’s also possible that your Low Bar Technique is on the “extreme end” of the spectrum. Maybe you’re just keeping your shins so vertical or pushing your butt so far back that it’s becoming a problem for you. Perhaps a “medium bar” style, a little more similar to your regular squat could work.

I have been rehabbing using highbar squats and highbar paused squats, so maybe I just need to stay the course while adding in some lowbar Goodmornings or sumo deads

As far as squats go do what you can in whatever way allows you to be pain and injury free consistently long term pre much.

Doing less e.g. resting and/or reducing work and gradually returning to activity and doing more e.g. months of stretching and mobility work hasn’t seemed to do much for you unfortunately (tho pulling off the splits is a cool party trick). Maybe something different is the way to go.

If high bar let’s you get work in then that’s what you should be doing right now. It hasn’t been said outright but I’m thinking knees tracking more forward then out is more comfortable for you?

If I lift my knee straight up and forward, I feel no pain. However, lifting it up and a 45 degree angle or straight to the side creates a small sharp pain where the thigh bone meets the hip.

I have experimented with the stance, and discovered that wider leads directly to more pain. 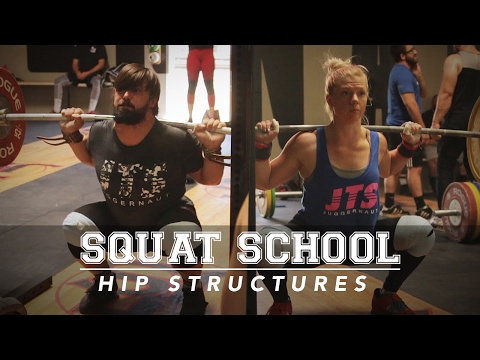 Even if you are a powerlifter it’s not like you can’t bring a high bar or “mid” bar squat into competition. Actually if you look carefully many lifters are successful without placing the bar as low as possible on their backs e.g. Andy Huang who took first overall at Reebok Record Breakers 2017

A very narrow stance gets rid of a lot of the pain, but becomes an absurd movement to progress with because I have a fairly wide pelvis (back would have to round out to reach parallel).

Butt wink is a separate issue which we can sort out if a narrower, knees forward stance is what allows you to squat without irritating your hip. A bit of wink might be fine but there’s no vid of you squatting so I can’t judge. 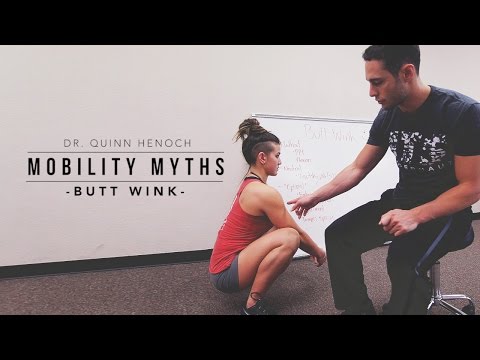 Now that you’re squatting happily we can take a stab at what’s going on with the hip.

I’ll link some stuff and you can have a watch of them and if something fits with what you have going on then we can sort it out. 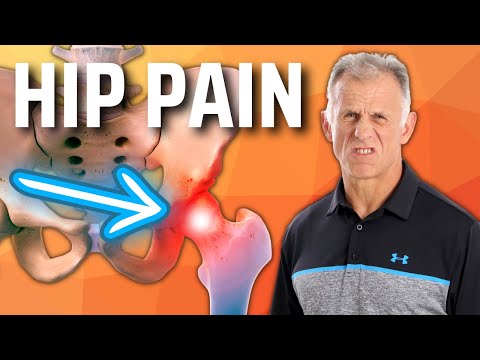 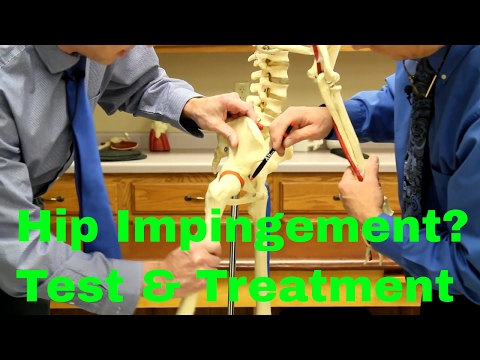 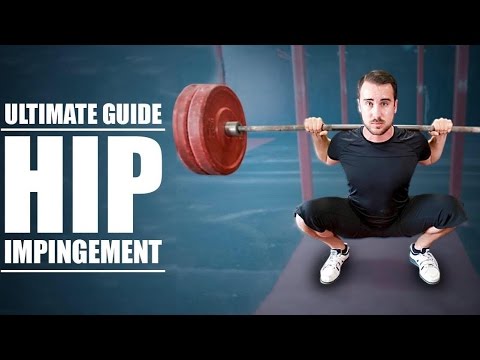 Bursitis Around the Hip e.g. Iliopsoas or Trochanteric 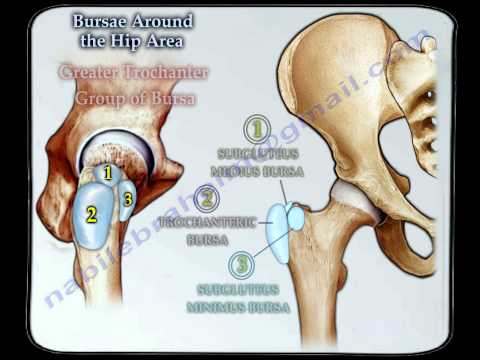 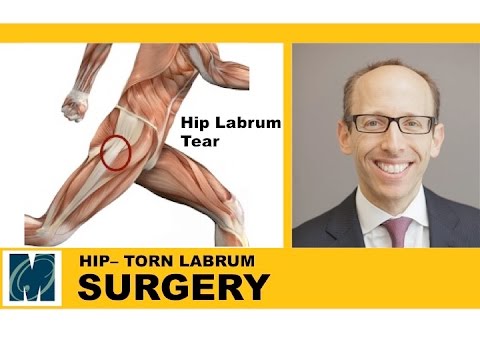 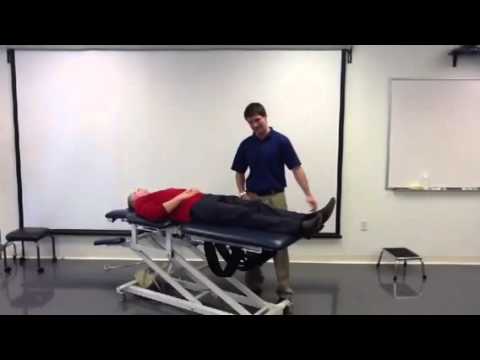 Referred Pain/Tenderness from the Back 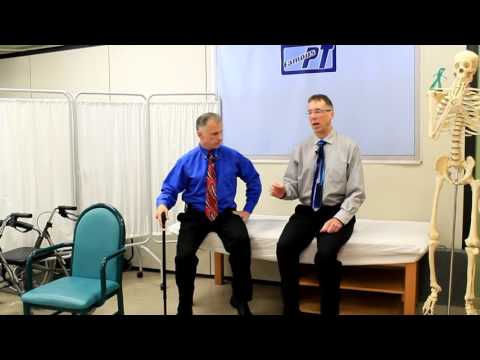 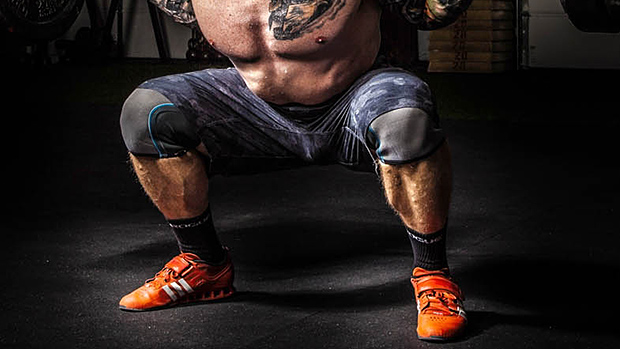 Notice a pinching sensation when you squat? Not good. Here are 5 ways to fix the problem. 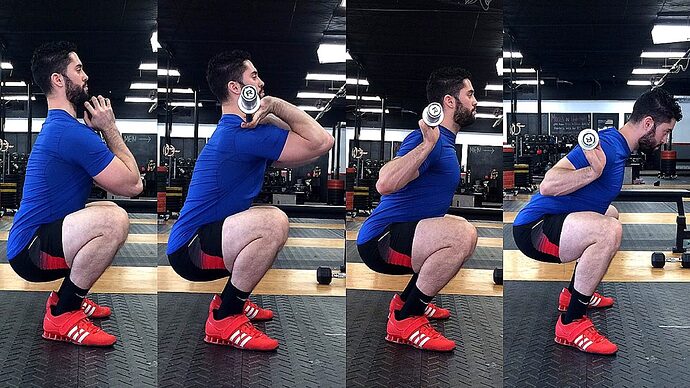 Many athletes get hip pain and pinching during squats. Learn how to determine why you are having this problem and (more importantly) HOW TO FIX IT!

This happens to me if I get into severe anterior pelvic tilt during my squats, one I fixed that it disappeared

The physical therapy video was very informative, and I think they described my symptoms quite well with hip flexor (rectus femoris) tendonitis.

This would be a relief, if true, because tendonitis is something I know that I can heal and manage. A bone spur was my fear, because surgery isn’t an option for me.

The plan moving forward will be:

Thanks for the help guys. Still open to further advice, particularly if anyone has had this issue personally and overcome it