I recently became aware of the risk that HCG carries with regards to prions.

This topic has hardly been discussed on this forum (or any forum for that matter) so I’m struggling to find more information. I want to come to a conclusion as to whether HCG is actually safe or if the whole thing is overblown.

The study in question:

Detection of prion protein in urine-derived injectable fertility products by...

The presence of protease-sensitive prion protein in urinary-derived injectable fertility products containing hCG, hMG, and hMG-HP suggests that prions may co-purify in these products. Intramuscular injection is a relatively efficient route of...

It seems the only way around this is to use recombinant HCG, but it’s a lot more expensive and difficult to dose accurately.

Anyone have any input on this issue? Good or bad. 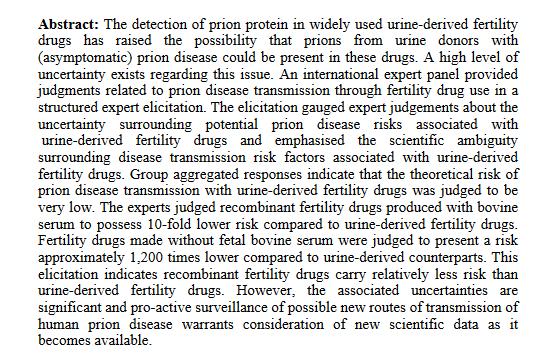 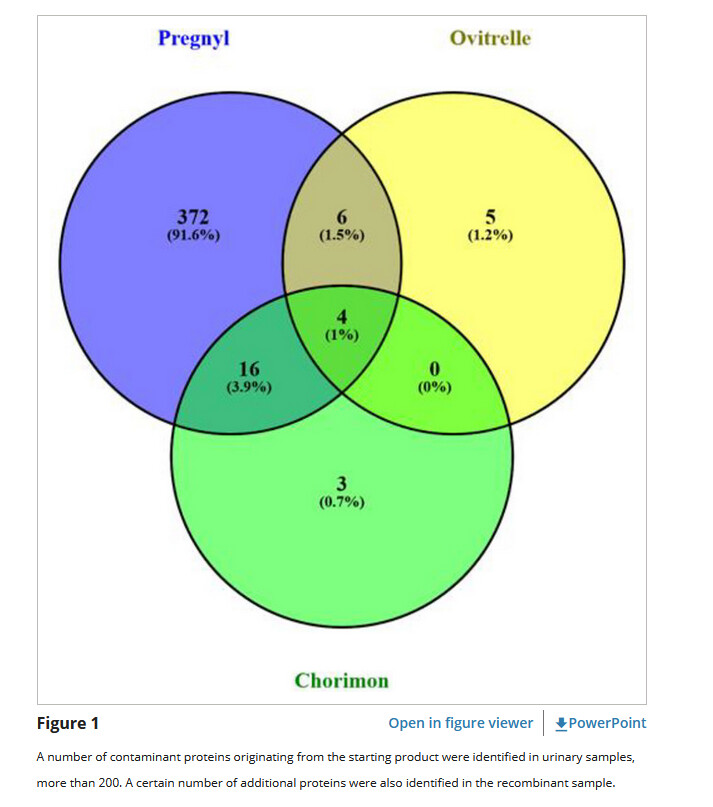 As for the contaminants in urinary-derived products, uromodulin, which is also the major urinary protein, was a major protein identified following hCG. Although this is a logical identification since it is the most abundant protein in human urine, its presence in an injectable product could be a matter of concern. Additionally, other proteins, such as alpha-1-microglobulin or apolipoprotein D, and prostaglandin were also identified with high confidence and with high relative abundances. The contaminants identified in urinary-derived hCG formulations resemble urinary proteins identified in urine-only samples, which were described in a recently published study on stress-induced urinary incontinence 33 and are already known to be involved in important biological functions and pathways. They act as growth factors, proteolytic enzymes, binding proteins and are members of the cytokine family, which have been reported to influence, both directly and indirectly, inflammation and immune response. Especially, accumulation effects of these impurities in patients after multiple treatments, usually practiced during IVF-procedure, might be considered as potential source responsible for development of adverse reactions. In addition to common adverse effects, also declared in the product safety sheet by the manufacturer, only women undergoing IVF treatment after administration of urinary-derived products have reported serious anaphylactic reaction. Koh et al. 34 reported a case of IgE-mediated hypersensitivity reaction in patient observed shortly after application of urinary-derived products. Patient described appearance of severe symptoms like shortness of breath, wheezing, flushed skin, generalized weakness, and vertigo, which required emergency life-treatment and had consequently immediate interruption of the IVF treatment. Skin test performed weeks after occurring of the first anaphylactic condition with the same batch of gonadotropins could confirm triggering of IgE dependent allergic reaction. Furthermore, authors have verified attendance of specific IgE antibodies in patient sera against urinary-derived preparations in comparison to negative ELISA results for high-purified gonadotropin products. Phipps et al. 35 reported about the same type of allergic reaction whereas Redfearn et al. 36 mentioned delayed type of hypersensitivity following treatment with urinary-derived products. All reports agreed on, and strongly suggested, that nongonadotropin proteins in urinary-derived products are the direct cause of described IgE-mediated hypersensitivity reaction.

The presence of nongonadotropin proteins in urinary-derived preparations mentioned in previous paragraph might be also an explanation for variable treatment efficiency observed for urinary and recombinant formulations 37. It also could be an acceptable explanation for potential different immunological properties of these products regarding the influence on maturation of dendritic cell, production of pro-inflammatory and anti-inflammatory cytokines and regulation of T-cell response. The most studies researching immune modulatory effects of urinary-derived or recombinant hCG products are contradictory and show a lack of information relating to the source of the product used. Poloski et al. 38 and Dauven et al. 39 found that both formulations have the same ability to increase the number of human T-regulatory cells regardless of the concentration used. However, stronger suppression effect on the maturation of murine dendritic cells was observed when higher concentration of recombinant hCG was used. Dauven et al. 39 reported no changes in secretion and production of any pro-inflammatory or anti-inflammatory cytokines, especially the IL-10, independent of the recombinant hCG concentration. In comparison to this finding, Wan et al. 40 reported increased levels of IL-6, IL-10, and IL-12 after treatment of activated bone marrow dendritic cells with urinary-derived hCG product. Additionally, authors also described reduced potential of dendritic cells to induce T-cell proliferation in presence of uhCG through effects on down-regulation of MCH class II expression and elevated IL-10 and IDO expression suggesting these effects as a key factor of fetal tolerance. Phimister et al. 41 described potential immunosuppressive and fetus protective role of uromodulin in amniotic fluid against T-cell mediated allogeneic rejection.

As already mentioned, uromodulin is the major contaminant protein observed in all urinary formulations, it is produced and secreted in the kidney and it is the most abundant protein in normal urine 42. It was reported that urinary levels of uromodulin can be used as predictive biomarker for preeclampsia at the twenty-eighth gestational week 43.

Recent publication 44 highlighted the ability of urinary uromodulin to serve as an allergen epitope for the activation of allergy-associated T-cells in mouse allergy, and acting through the binding to the EGF-like receptor on the surface of polymononuclear cells, activate different signalling pathways and causing cytoskeletal rearrangement and phosphorylation of nuclear factor-kB that forward induce phagocytosis of polymononuclear cells 45.

Apolipoprotein D (APOD) was identified in all urinary-derived samples that were analyzed. This 29-kDa glycoprotein is a prominent member of the lipocalin family and it is present in almost all tissues. This protein is secreted, and has a prominent role, in transport of small hydrophobic ligands, e.g., cholesterol, progesterone, pregnenolone, bilirubin, and arachidonic acid. It was reported that APOD can be found as predominantly associated with high-density lipoproteins in plasma 46-48.

Recent publications have highlighted a role for APOD in aging processes and the stress resistance suggesting that APOD actually plays a protective role in cellular and oxidative stress and it can also have been shown that this protein can mediate nerve repair 49. There are also some reports that APOD can be used as a marker for breast cancer and bladder cancer but there is no report on possible effects of APOD if injected as in case of subcutaneous injection of hCG formulations 50.

In all analyzed samples, APOD was identified as highly expressed protein, which relative abundance varied between different product batches.

Alpha–1–microglobulin (AMBP) is a serum protein that belongs to the group of protease inhibitors. It was identified in urine of patients with kidney pathologies and its structure and physical properties have been well investigated. However, its function is still not really properly understood. Some authors suggest that AMBP has an important part in regulating the immune system but is also being expressed during embryogenesis 50. In cases of tubular dysfunction, in the early stages of diabetic nephropathy and in the late stages of chronic kidney disease 51, its excretion is increased. Its presence in hCG formulations in large amounts might also be explained by recent findings that have discussed an involvement of AMBP in the remodeling process of the uterine spiral arteries. These findings propose an association between elevated maternal plasma levels, which also explains high urine levels, of AMBP with the forthcoming development of preeclampsia. There is no information about the source of the raw material used for hCG isolation, but it can be speculated that some of the donors might have been in the preeclamptic state at the time of urine donation. Since increased level of AMBP can be observed long before the manifestation of clinical disease, AMBP is being applied as clinical biomarker 52.

Another protein identified under the top ten major contaminants of uhCG is the insulin-like growth factor (IGF)-binding protein-7 (IGFBP7). This secreted protein has primarily been located in follicular fluid. It has been described to be involved in cellular proliferation, adhesion, and angiogenesis, and it may suppress estrogen production by granulosa cells. Tamura at al. 53 investigated the effect of IGFBP7 on steroidogenesis in equine granulosa cells. It was shown that the culturing of GCs with exogenous supplemented IGFBP7 has led to the downregulation of Cyp19a1 mRNA expression, which inhibited estrogen production of GCs. Furthermore, IGFBP7 has been discussed as a possible candidate for cell cycle regulator of GC proliferation in rat ovarian follicles 54. Furthermore, IGFPB7 has been recently proposed, by Wu et al. as a biomarker for the prediction and diagnosis of recurrent spontaneous abortion 55.

Ribonuclease pancreatic-RNASE1 and the non-secretory ribonuclease -RNASE2, which is also named eosinophil-derived neurotoxin, were identified in urinary-derived samples. Human RNases are secreted, small, catalytically active enzymes able to degrade RNA. One of the most important functions of the RNase1 regarding female reproduction seems to be the possible protection of the fetus through antiviral activity of this enzyme against human immunodeficiency virus HIV-1 56, 57. The same antiviral activity effect in the host cell defense against HIV-1 has been observed for the RNase1 isolated from the commercially available hCG formulation purified from the urine of pregnant women as well as recombinant RNase1. It has been also suggested that the RNase1 participate as a very potent activator of inflammation and immune response due to its ability to influence maturation and activation of dendritic cells to produce different cytokines like IL6, IL12 and TNFα 58.