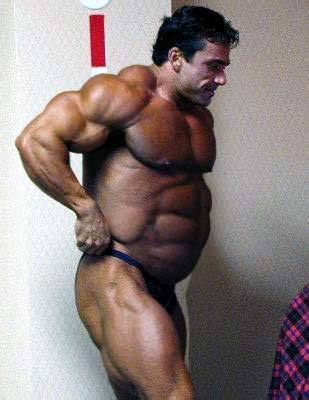 Check out this pic. Gotta love modern bodybuilders! I think it’s twins! Think this guy could do a vacuum pose?

what causes this HGH?

Well, yeah it’s caused by HGH, but not to that extreme. That’s fake.

that photo is clearly fake.

look at the corner of the wall, going up vertically starting from the bottom.

the wall bends right instead of going straight up, which means its an obvious fake, just like p-dog says.

looks fuckin strange though doesn’t it!

Had the stretch been done at 50% of what you see here, reasonable doubt would have been possible.

Those of you who think this photo is fake haven’t been around competetive bodybuilding recently.

Maybe it’s fake, I don’t know, but when these guys relax on stage many of them have guts at least 90% this bad. If you only look at them in Flex you’ll never see this, but watch an actual pro show and you’ll see these gigantic guts pop out between their poses. Scared the crap out of me first time I saw it. Remember the movie Alien?

i’ve seen many non-fake pictures of distended stomachs around, and agree that it can and does happen.

gunter schlierkamp has had problems with distended stomachs in the past, though i think he’s sorted it out now.

but this picture has been faked up to the max!

I just had to drag this over from the Ronnie thread. You all be careful or Ptr will “banish” you from T-Nation like he has done to me.

“Its truly amazing that some of you took an oath to become posters on this site…to become T-men…and then you show your envy…jealousy…and negativity…and “smallness” by trying to pull someone down who has achieved something. Most of you are striving just for a few extra pounds of muscle; but you would think your are Adonis’s by your comments. There are a FEW people on this here forum whom I have seen who walk the talk at all. The rest of you are just jealous little people…face it…”

I don’t see any bend in the wall. I see a shadow.regardless of whether or not this is fake, this is far from abnormal in the ranks of BB today. By far.

Wow, check it out hgh can make each of your abs as big as the next guys pecs.

A Dude in my gym has the same gut going on so I believe this picture. The dude does no cardio and consumes some serious carbs, sure he is big, but not the body image I’m looking for.

can you say “PHOTOSHOP”

Are we looking at the same picture? Because it’s obvious to even the most casual observer of that photograph that there is a bend present that typically wouldn’t be in normal walls.

Who cares if it’s photoshopped. It’s not far from what you actually see these days.

Are you talking about what looks like a corner? I thought it was a corner. Anyway, who cares.

There is a corner there, but you can see it bending out just under the stomach. It’s definately been altered, but as it’s been said, this isn’t that far from reality.

That dark area is his shadow. It traces his body exactly. How on earth can this be construed as anything but a shadow? And as for the size of the abs, there are many many people with abs this big. Seriously, it’s not out of the question.