Looking to buy a power rack for
Home use. Any suggestions on one that won’t break the bank? The likelihood of me pulling or pushing anywhere close to 600lbs is pretty low and what the lowest price ones seem to be rated for. I’ve just come off two surgeries and am just getting back to this so real heavy stuff is a long way off.

What is your budget?

If your not too tall I got a Titan t2 I believe it’s called. It’s short for sitting in basements with lower ceilings. Normaly it’s about $290 but just saw it’s on sale somewhere for $250. Capacity is 700

Go used. I picked up my power rack, 700lbs of weights, and 2 bars for like $600-700 (I can’t recall exactly). It was a steal because the guy was moving and needed it gone but deals are out there.

I recently asked a similar question in another thread. Check out some of the suggestions there. I ended up with the Fitness Reality 810xlt. About $200 total.

This is a good call. As long as you double-check that the piece is in good condition, keeping an eye on Craigslist isn’t a bad idea. Plenty of people toss out fitness equipment often enough. … ha, on a whim, I just checked my local Craigslist and @Vincepac1500’s suggestion came up in the search. 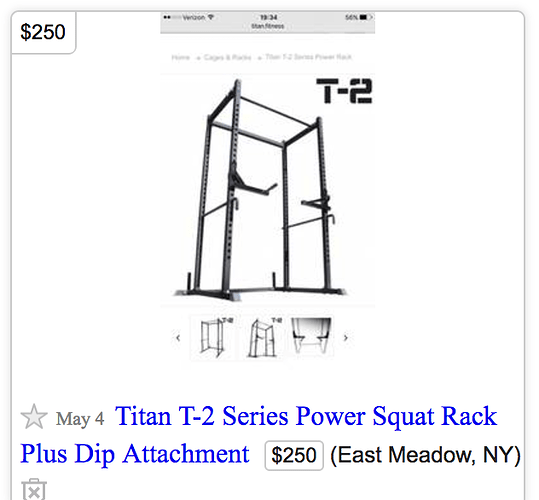 I just got the Titan T-3, have not even assembled it yet but I think its slightly better quality than the T-2 and not much more expensive, at least one dimension of the uprights size is bigger so more steel.

Thanks guys. Trying to keep it under $300. Been scouring craigslist and the like but a semi-pro buyer seller is killing me by scooping up everything. I’m short and it’s going in the garage. So no worries there. I’ll check the others out.