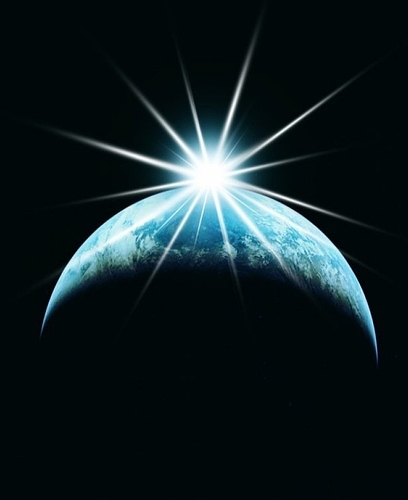 Every once-and-a-while, you “slip-up”, My Brother…

Behind “Real Dolls” and “Panty Sniffing” (just kidding! Pavel needs a “Merry Chrismas” too!)… a LOT of us realize that you’re a smart and pretty darn insightful guy.

(What’s getting into you and Shugs lately? LOL!)

TC, thank you for this! Best wishes to you during the holidays!

But seriously, the question is:

What’s coming over the horizon? What lies in the future? Is this pic foreshadowing anything in particular? What else could cause TC not to post a traditional Friday powerful image?

Or, it could be because it just looks cool.

I wonder if this photo is even real. Although it is cool. I once visited the home of a gentleman who had retired from a career in NASA, and the photos of outer space he had in his collection were something to behold. They showed space to be so packed with stars the blackness of it was in the minority. Truly awe-inspiring.

At first i didnt get it… call me shallow… but now it does kinda have an awesome effect if you ponder on it a bit… hmmm. yep! deep!

Merry Christmas to all on T-Nation!!

I can’t recall if the shot came from an acutal “Apollo” Mission File (which I think it did) or from the pages of Science Fiction; but it is a well known shot.

Also, as I recall, it is just one frame of a strip that shows the Sun “rising” over the Earth.

As I scrolled down reading the middle of the screen, it looked like the Charger’s lightingbolt.

I am extremely offended by this picture. It’s just another picture objectifying females. Look it how round that planet is just like a female breast. I WANT MORE PICTURES OF PROPERLY COVERED UP FEMALES THAT ARE NOT VERY ATTRACTIVE PICKING UP HEAVY STUFF!!!. T-Nation is full of testosterone-fueled pigs that should be neutered.

This is a bodybuilding site. That planet doesn’t even look like it works out. Mere eye candy…

[quote]michael2507 wrote:
This is a bodybuilding site. That planet doesn’t even look like it works out. Mere eye candy…[/quote]

Yeah, but check out the 75% water retention. Definitely on roids (likely D-bol)…

[quote]TeeVee69 wrote:
michael2507 wrote:
This is a bodybuilding site. That planet doesn’t even look like it works out. Mere eye candy…

Yeah, but check out the 75% water retention. Definitely on roids (likely D-bol)…[/quote]