I was waiting to get accountable before starting this log to make me accountable. So here we are.

We made it to Vegas…7 weeks ago. It has been a bit nutty and way harder this time around. Last time I came by myself and all I had to do was focus on poker. This time is a lot more complicated. Honestly the to-do list is so long and daunting I have just been ignoring it.

Some pre photos. This is the worst shape I have been in since probably the last decade. Last time I had this BF% I was 10kg heavier and had a 800kg training total. 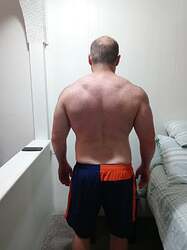 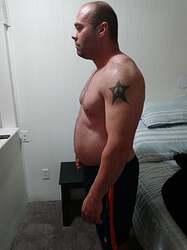 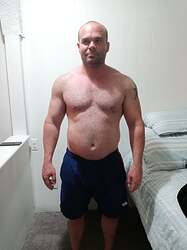 No idea my body weight, I am afraid to find out for sure. Still have traps though so thats cool.

Any who, War and Gummi Bear Stories to come. Also some training.

GOALS: just get sexy, later I might make some strength or body weight goals but for now I just need to keep recomping until I am presentable to my Wife.

Along for the ride mate, good to see you start a log and am looking forward to seeing you smash it and get back into shape.

Training Update: Meh I have technically trained 4 of 5 days this week which is a sad Vegas PR but a PR none the less. Today was super pathetic but just getting in anything is half the battle. I havent had much time to update in here, hopefully training and updating improves.

I have a few minutes as my Wife and her friend are going to Omnia to see Steve Aoki so I am waiting for her to get ready. She is stressing so much about what she is wearing I am not sure if that is part of the fun or not? Any who I am going to go play poker at Caesars to kind of be there as kind of a security blanket for them (it can be scary AF for ladies in Vegas). The poker room is 100ft from Omnia. Its a really cool atmosphere. You can hear the club music quite clearly in the poker room.

LOL My wife just said “this wine is so strong for me” during her precup. Such a Senora

See everyone on the flip side.

Felt really good to Squat, I already feel leaner…but my back is lit up. At this point I think I have some kind of disc bulge or some shit from sitting in a poker room 8+ hours a day and then sleeping on the worlds shittiest mattress. I will be posting in the forum looking for info on that.

Also it took us an hour to get to the gym (buses/walking) so we may not be going there/ We will see how long it takes tomorrow but it just doesnt seem time efficient enough right now.

Tells You’ve Been in Vegas Too Long: $18 for a drink? Thats not bad! FTR I am using poker points on those. My mid-west heritage does not allow me to pay more than $5 for anything.

@wanna_be Thanks it feels good to be back!!!

“So you put everyone on Drugs!?!”
“Yea, but they were all willing participants, enthusiastic even.”

Last night or rather at like 4am this morning my table was a ton of fun. Weed came up (obv) which in turn led to me passing out Gummi Bears to half the table and 1 other taking her own. Then a friend of 2 of the players starting rolling a blunt in the poker room. I may have told him it was ok to do that thinking it was, it was not. He was promptly requested to roll his blunt some place else.

I have switched my playing hours to play 5pm to 5amish and lets just say the games are more interesting.

I also lost to a Straight Flush and then made a Royal Flush the very next hand which is insane variance. Funnily I lost just the $3 blind to the straight flush because the player didnt know he had it.

Pretty good pump. I can see the attraction of using a Smith machine as a BBer. I might even script as assistance in weird spots where it was the only option.

Inside the Mind of a Lunatic: Won 4 figures today, waited 30 minutes to take the bus home after a 13 hour shift to not spend $8 on a taxi.

Ok well its 7am so time to finish dinner and get some sleep.

Yea so last week got away from me a smidge. I ended up working 55ish hours in 5 days which wouldnt have been an issue but I was working until 5-7am which absolutely killed my sleep and gym time. Then I took Saturday off to have some Wifey time.

Wednesday: Immigration Lawyer, no surprises but we got a time table (9 months before she could leave the country again) and cost (fuck off). We also dont have a time limit which is awesome.

My wife has discovered Hall Mark channel (not great) and Dollar stores (awesome).

My wife has discovered Hall Mark channel (not great)

LOL. I tell the wife, you can watch unlimited chick shows without me, and don’t feel bad that I am missing out (she somehow thinks I would want to watch them).

(she somehow thinks I would want to watch them)

At this point it cant hurt.

Weekends hit Hard AF here and are really hard to miss but we are back on the wagon.

And i am not sure why every one says this apartment complex is dangerous. The cops are here every day. Just this morning in fact they came after my wife and I were awoken to gun fire. Allegedly there was some kind of fight that escalated (obviously LOL) to gun fire.

Any who LFG. Again.

Welcome back Bots! Looking forward to following along with your adventures

Yea, think I trained 3.5 times since then. My schedule has been chaotic and PF is demotivation 101. Vegas is also maddeningly eventful. It should get better next week. Until then let me tell you about last night…this morning? I dont even know what fkn day this counts as or is.

Nothing Good Ever Happens After 2am (or 1am):

-I meet June Plays Poker and in perfect luck I am wearing my “Sounds Gay, I’m In” Shirt.

My brain is fried.

After all said and done, you were up a good amount after a night full of shenanigans? Win, win.

a night full of shenanigans?

That was a decent day. Luckily this week I am switching to a slightly more normal schedule.

LFG! Just bumped my TRT and a new schedule means a ton more time for training, hopefully this time it sticks.

I have mentioned this before (several times LOL) but calories are dumb. Even eating more calories in the form burger patties vs protein bars I notice how much better my composition is.

Again, I am not saying calories are not exactly what they have been defined as, but maybe just maybe the body doesnt literally light food on fire in its process of food and thermodynamics doesnt translate exactly to biological function? IDK just a fucking thought.

I walk probably 1-2 hours a day (to bus stops and in between poker rooms etc) and my physique will just be soggy. I lift weights (or what ever bare minimum resistance is available at Planet Fitness) and my body tightens up so quick. I become hungry again as well. Not saying cardio doesnt help but its pretty worthless with out weight training.

All exercises done to a top set that is a drop set. Probably too much leg work.

I really like the Pen for casual use. You can control how intense it gets. Those Gummis though half a bear and I am lit. Those are Sunday afternoon walk the strip in the sun type things.