I think it would be cool, and a good visual representation, of how even the genetically gifted, still took time to progress.
People see bodybuilders and think they got to pro level by taking a couple cycles of gear. They think it’s all magic.
This is Nick Walker over 8 years.
I got the image from another site.
I might make some of my own by tracking progress of various pros. 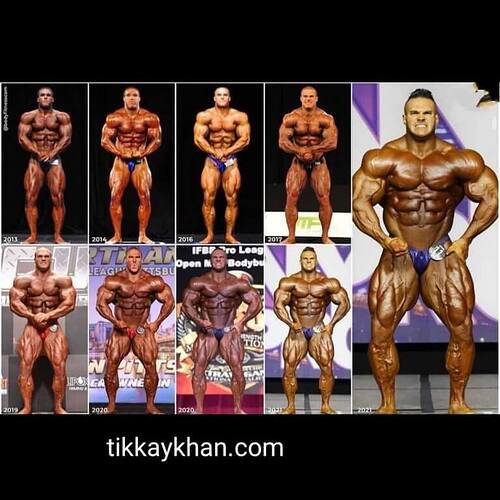 People see bodybuilders and think they got to pro level by taking a couple cycles of gear. They think it’s all magic.

Some experience with gear has lead me to believe that they are not as magic as people think. I think a lot of BBers lie about what they are actually taking too.

It seems the guys who have gotten big with steroids who I know personally tell a different story, than the pros. Sure the pros have better genetics, and are bigger than the guys I know, but there is just such a huge discrepancy between what the pros say, and what the guys I know say. I just don’t believe Lee Priest when he says his biggest cycle was 400 mg deca, and 400 primo or something like that. Like why would you not up the doses if you were in that position, and so close to winning already?

It’s kinda one of those things that once you try them, you get a different perspective. Once I learned how much I would need to take to really be huge and jacked, I decided that being built and lean on TRT was likely the best route for me. I’ll probably do a blast or two more, but I am just not willing to run grams of gear to rent gains.

This is why it can be annoying when people say you don’t need that much or that’s a lot.

Takes more than we have been led to believe.

I personally know a lot of guys who have used. All over the place on dosages, with me being probably the lowest. There is a correlation between dose and impressiveness. One of the more jacked guys told me that if running test alone, just to use a vial a week to keep it simple lol. He was like the really big guys use more, but 2.5 grams should get you plenty big.

I on the other hand believe that its all genetics, not drugs and i do believe that those who are elite level probably use less than i do.
Its just that i have seen that in everything, not just strenght and fitness.
We look at music - there is such a thing as an absolute hearing, or a sense of rythm. If you dont have those you will never play anything as good. There is also a factor of how beautiful your voice is - everyone can learn to sing the notes, but not everyone will sound good singing the same song.
I have spent lots of years with fighters and there is the same thing - we all spend same hours in training yet some become champions and some - dont.

When you watch UFC there are some fighters with terrible records, losing absolutely everything yet when they go for a seminar to some local gyms you see that the worst dude in the UFC would kill 1v3 everyone in any local gym.

I understand that gains are dose dependant, but i do believe that genetic elite gets twice as much out of 250mg of test than i do…
I would really love for it to NOT be so, but i believe that sadly it is so as i have upped my doses, doubled and trippled them and never got shit more out of that.
If just doing huge doses would matter i would be at least looking like an average bodybuilder, but nope… nothing. Im almost 32, with 17 years of experience in the gym and steroids and my arms were a bit less than 18inches at my fattest… they are like 17 and 1/3rd of an inch if im lucky now… And i have done grams of test and grams of tren. Didnt gain nothing more than on 400mgs.

Whenever I hear people discuss the doses the pro use I think of this picture: 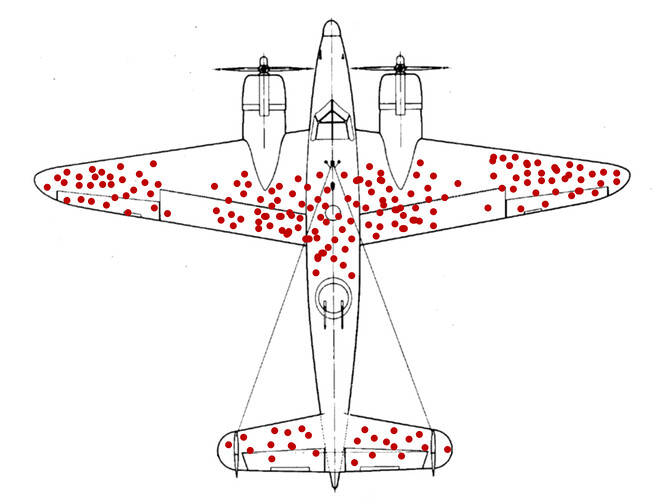 I on the other hand believe that its all genetics, not drugs and i do believe that those who are elite level probably use less than i do.

IMO, they have awesome genetics, and use a lot. I will say, that a few have seemed to be honest. I remember a Tom Platz interview with Paul Dillett, and I believe he was actually saying to the best of his memory what he was taking.

I also remember Kevin Levrone (absolutely amazing genetics), saying his dosages at one point in a video, then later in a collaboration with his old coach (Palumbo), they talked about drugs / dosages, and Palumbo was citing much higher amounts than Kevin said before. Could be he just didn’t remember, but I also see a big incentive for these guys to down play their use.

I feel the pain though on not having great genetics. Mine aren’t terrible, probably even a bit above average, but above average is not even in the same ball park as the elite guys. They really are freaks of nature, but at the same time, I do think they are using a lot on average.

Not to mention, these guys likely have gene mutations in favor of myostatin inhibition.

Who knows if their body can make use of grams of drugs, with respect to saturating receptors etc.

I also think it is total BS how some pros like Lee Priest etc claim 200mg and 400mg of drugs.

I do believe these pros likely use a variety of drugs at moderate doses that probably totals to grams.

but I also see a big incentive for these guys to down play their use.

I think most of the time they just have no idea what they’re really taking, or how much. Coach says something like “1 shot of this, 2 of that” etc. a lot of them just lift the weights and take the pics and let their well-paid coach make the decisions.

I remember watching a new amateur classic competitor on YouTube trying to describe why he was taking each compound and not having a clue, really. He even said “coach says to take it, so I take it”.

please tell me what this picture means. thank you.

Pretty sure he is making an analogy between a plane being shot full of holes, and all the pinning the pros do, in different spots to be able to take as much as they do.

What @mnben87 said.
Human pincushion when running high amounts of gear.
Pinning everyday, represented by all the dots on plane. 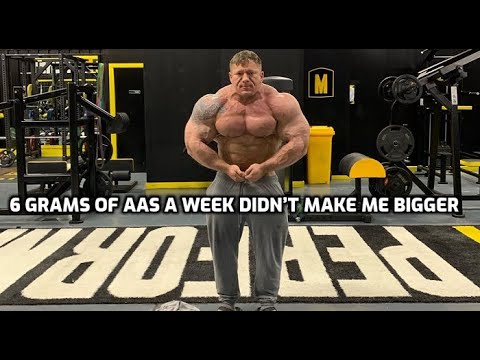 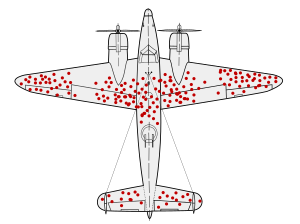 Survivorship bias, survival bias or immortal time bias is the logical error of concentrating on the people or things that made it past some selection process and overlooking those that did not, typically because of their lack of visibility. This can lead to incorrect conclusions regarding that which (or those who) didn't make it. Survivorship bias is a form of selection bias that can lead to overly optimistic beliefs because multiple failures are overlooked, such as when companies that no long... 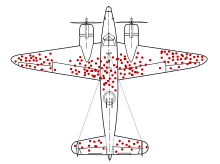 The damaged portions of returning planes show locations where they can sustain damage and still return home; those hit in other places presumedly do not survive. (Image shows hypothetical data.)

During World War II, the statistician Abraham Wald took survivorship bias into his calculations when considering how to minimize bomber losses to enemy fire.[11] The Statistical Research Group (SRG) at Columbia University, which Wald was a part of, examined the damage done to aircraft that had returned from missions and recommended adding armor to the areas that showed the least damage, based on his reasoning. This contradicted the US military’s conclusions that the most-hit areas of the plane needed additional armor.[12][13][14] Wald noted that the military only considered the aircraft that had survived their missions; any bombers that had been shot down or otherwise lost had logically also been rendered unavailable for assessment. The bullet holes in the returning aircraft, then, represented areas where a bomber could take damage and still fly well enough to return safely to base. Thus, Wald proposed that the Navy reinforce areas where the returning aircraft were unscathed,[11]:88 inferring that planes hit in those areas were lost. His work is considered seminal in the then-nascent discipline of operational research.[15]

As another example, when the Brodie helmet was introduced during WWI, there was a dramatic rise in field hospital admissions of severe head injury victims.[ citation needed ] This led army command to consider redrawing the design, until a statistician remarked that soldiers who might previously have been killed by certain shrapnel hits to the head (and therefore never showed up in a field hospital), were now surviving the same hits, and thus made it to a field hospital.

It’s a made up picture but a nice story behind it. 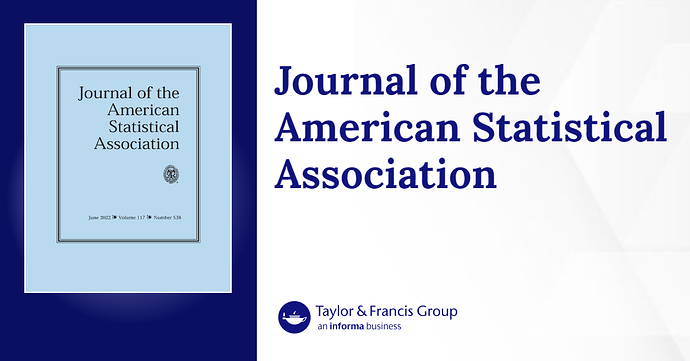 While he was a member of the Statistical Research Group (SRG), Abraham Wald worked on the problem of estimating the vulnerability of aircraft, using data obtained from survivors. This work was pub...

now that was interesting. thanks.

As @readalot astutely picked up on it’s about survivorship bias. We see the pros, they’re all amazing specimens, and we have whispers and rumors about doses, but little more. But of course the drugs aren’t the story, the genetics are. For every pro who gets on stage there are thousands of guys who trained just as hard, ate just as flawlessly, and took even more drugs, and they’re nowhere close to that level. So we think it’s the drugs and not the genetics. If all you see are the survivors you have a skewed view of what the full field of data actually looks like.

Who would believe that a bunch of guys, most of whom are using demonic (humor) Schdule 1 AAS drugs, would have long and informed epistemological dialogs?

You make my day and restore a bit of hope for humanity, in a world of increasing irrationality where many people don’t care to determine the facts before speaking. Or, never tried to determine, in the first place,how you determine facts accurately.

Barring death, plenty will bow out when they can’t tolerate the autonomic dysfunction, the mood swings, estrogenic, androgenic or progestogenic side effects of various drugs

Not everyone can take tren at all, let alone a gram of it.

That’s a really important point. Having a genetic predisposition to handle lots of drugs without losing your mind is probably a requirement to get to that level.