Well Patricia did not do as well as she had hoped. She came in 3rd out of 3 women in the lightweight division.

I think that we underestimated the competition, and were not fully prepared for the conditions. Couple that with “first competition jitters”, which caused some mistakes.

A couple of thing that we should have done:

Despite the loss, we had a good time, and will learn from the mistakes.

I’m proud of my girl, and look forward to seeing her kick some butt in the next competition.

I would post some pics, but I don’t have the photoshop skills, so we will post them later, in the photo forum.

Kickass. Why is this off topic though??

i showed up at this competion in Boise ID-flew in from NC. imagine my surprise when i looked up and saw patricia and ko!

the only event she really struggled on was the farmers’ walk. i have plenty of pics of this contest-including jesse murunde log clean and pressing 350#-and then standing on one leg and laughing! this is only about 20 lb short of the world record! also got most of it on video tape-need to get more technologically proficient so i can start posting some of this stuff.

i placed 7th in the heavyweights-this being my second contest(first at gold level). my buddy that i flew in to see got second and qualified for the nationals-now i need to get my ass in gear and qualify myself since nationals are in SC-about 5 hours away for me!

instead of a women’s forum i would really like to see a strongman/women area. i have powerlifted since i was fifteen and i have never had as much fun doing that as these crazy contests.
i highly encourage everyone who is able to at least enter one. you will make more gains in two months than most people make in two years! 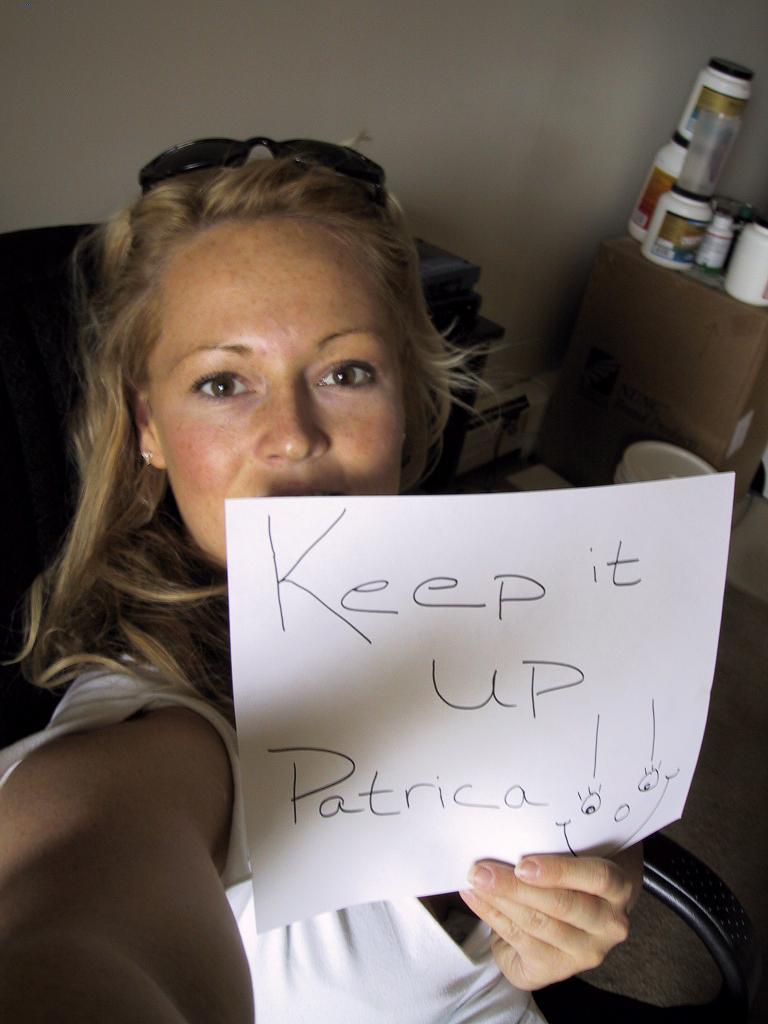 I was thinking it wasn’t for a few days!!
I can’t wait to hear about how it went, and what the other girls were like.

I am sure you are walking away with allot of great info. I bet if you journal the thoughts you have had here, or elsewhere it will become invaluable for other women when it comes time for them to do it.

This is the best part of any endeavor, the start!!
You have all of Alberta cheering for ya… some day I will make it to a comp!
Good for you Patrica! Now you can teach me!! ;0)

Much love is extended in the westward direction. You have done more than most will ever do, and you will only grow stronger and more confident. Congratulations on completing your first competition; soon enough you’ll be winning one!

I remember my first strongmen competition… it was the most grueling thing I ever done in my life! And that’s comming from a guy who played football for 9 years, rugby, hcokey, competed in several olympic lifting competitons and several other interesting activities!

Really it’s impossible to know how hard such a competition is before you actually try it. The pain and incomfort is almost unbearable in most events.

Overall I placed 4th out of 6 competitors despite being stronger and more explosive than all but one competitor.

So there is really nothing to be sad about Patricia! With experience will come success! So I’ll give you some goals for the next few years:

Very few athletes can claim to have successfully compete in the 4 major strength sports … so that shall be your goal Wonder Woman!

Those points you made KO are right on. Live and learn. You’ll do MUCH better next time with experience. This is why competition is great. It’s WAY different than the gym.

Patricia: You won the moment you stepped on the field of competition in a sport new to you. The overwhealming majority of the human population will never have the courage to compete at anything meaningful, never mind something as physically and emotionally demanding as a strongman competition. Personally I’m in awe of you.
It sounds like you learned a great deal from your first competition and I have no doubt you’ll kick ass at your next one. 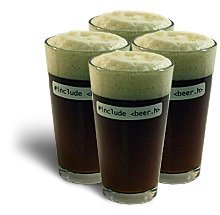 Someone wants to say hello, Patricia. Props to you for being a strong chick. You’ll kick ass in Portland. 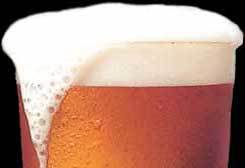 Cheers, there is a shipment of Canadian on it’s way to your door!
Good job!

I am very proud to call Patricia a member of the T-mag community. Great work!!!
During my first Power lifting competition, I was so narrowly focused that I placed the gap in the knurling behind my neck in the squat and started the lift. Well, this bar had knurling in the center section and I came up way off center on the bar. Needless to say I blew the lift.
Pat you are one of the few. You get out and compete.
Best of Luck.

I’m sure next year it will be…“Patricia came in first out of 3 women and looked hot in her cut offs doing it.”

Which reminds me I have to go workout. Ciao.

As Ko said…“I’m proud of my girl, and look forward to seeing her kick some butt in the next competition”…

Us too Trish, us too…

“For every disciplined effort there is a multiple reward”

You entered. You showed up. You finished. Sounds like a winner to me.

The first time for anything is educational. It’s cool that you put in the prep work, showed up, and completed the event. You know what to work on for next time.

It might not mean much but I’m impressed. Good show! 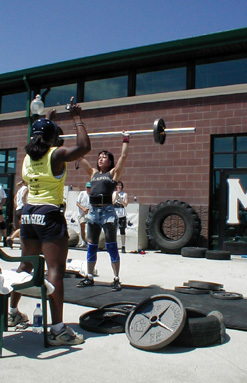 Pretty much my thoughts during the first event, Farmers Walk. While it was originally listed as 100lbs for 200ft for the Lightweight Women, the promoter changed it to 110lbs and not the usual farmer implements, but anvils. So, this is strongman, no prob; I will adjust. BUT, both the lightweights and heavyweight women used the same implements as well as tire (400lb), in those events. What to do?

Learning experience, indeed. Learned alot. And will use that to my advantage.

Christian: your post means tons. Thank you so much. And I’m going to print it out and keep it. Them were words worth their weight in gold, that’s for sure.

Pitt: it was such a pleasure meeting you! I was so happy for your friend! I hope you get to Nationals, too. And I hope our paths cross again at a contest.

Joel, Magnus, CMC, Cupcake, E~, et al: wow. I can’t believe that you all have such belief in me. And I’m just…speechless. Irondoc: exactly, live and learn. And man, I learned. Really!

I must have drank at least 3 bottles of Gatorade. As well as a gallon and several bottles of water. It was 87degrees that day. And the contest didn’t begin until 1PM. Last year, it began at 10AM. Which would have been great this year, due to the heat. Oh well. It’s all part of strongman. The contest ended a bit before 6PM. I didn’t have a beer until 8PM (along with my steak).

What Ko said is right on. Except I thought I had eaten enough the day before (had a nice bacon burger Friday evening). But also, I didn’t hydrate properly the night before, too. We figured this all out on Sunday. Note to self: For Nationals, take along softback cooler filled with extra food and whatever else needed.

Also: I need to work in a variety of settings, besides the gym. Outside for one. In the heat. On the grass, gravel, etc.

As for the contest: met some truly great people. Strongman is sooooo different than bodybuilding. In a bodybuilding contest, you’re backstage, AWAY from the crowd. You’re also not talking, socializing with other competitors. Not so in strongman. We’re all giving each other advice, socializing, etc. I didn’t socialize as much, I felt I needed to “stay focus”. Which I think I won’t do anymore. From now on, I’m hanging in the competitors’ tent and socializing, staying loose. There’s some great people, and I wanna meet 'em. There’s indeed more of a “family like” atmosphere in strongman. More so than in bodybuilding.

Oh, as for that insane “bodybuilding is a sport” thread? Let me tell you that last year, I remember a thread where someone asked the same thing. Bill Roberts posted a no with a very good explanation. I dissagreed. Hey, not anymore. I was in the wrong. A bodybuilding contest is a cakewalk compared to this.

Everytime I came up to the “platform” at this contest, the promoter would be yelling into the mike, “long time bodybuilder, first time strongwoman competitor…” as part of my announcement. People were coming up to me, saying “wow, I gotta get into bodybuilding…” since they thought that bodybuilding “prepared” me for strongman. Uh uh. It did not. Renegade Training did. So did Oly lifting. And certainly, strongman training. NOT bodybuilding.

I did walk away with a few things I’m proud of. I weighed in at a solid 128.5 pounds and damn lean. I had gained a few more pounds of LBM in the last few weeks. But had gotten leaner. I was the smallest of all the competitors. Yup, I was the lightest. But I was able to hold my own. My tire flip was the best. It was solid, the tire didn’t roll awkwardly, and I went for the entire 100ft in 47-seconds in a solid straight line. Oh, and I can sunburn! Whoa. HUGE revelation. Especially when the only other time I’ve ever burned was back when I was 17 and had fallen asleep under the sun for like 4-hours. I got a wee red on the legs.

The chick that won here will be in Portland for the contest on the 28th. We’ll see what’ll happen there. Especially when that contest is more strength oriented. She’s a great competitor and I can’t wait to compete with her again. I’ll certainly be better prepared. 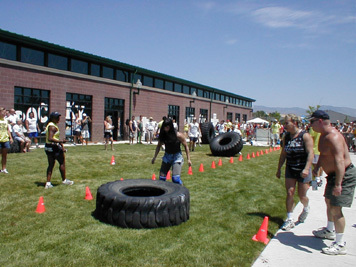 Take THAT you pesky tire…

You’ll see Tod and Julie there on the right of this photo. But the woman in the yellow on the left is Dione Wessels, the judge at this contest as well as the Grand Dame of NASS (North American Strongman Society). I hear Julie yelling, but what I really heard was Dione’s “go babeee, go babee!!!”, towards the end of my tire flip.

And of course, the person who’s responsible for this pic is Ko. The ultimate strongwoman support.

Patricia-Again, great job. A word of advice, from what I seem to gather from the pic: Attack the tire!! When you push that SOB over, follow it right down and get set for the next flip. It might only be a quarter second lost, but over 100 feet…who knows. 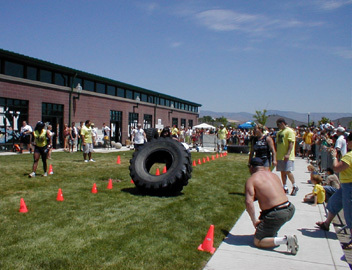 Sully, point well taken. It’s funny, at the time, I thought I was goin’ a hundred miles an hour with that tire. It felt lighter than 400lbs.

I could barely hear the crowd cheering; but they were. It was all soooo surreal.

Julie told me right before I was up for the flip: “just get angry at that tire. BE angry. Flip it with all you got.” And that’s all I focused on.