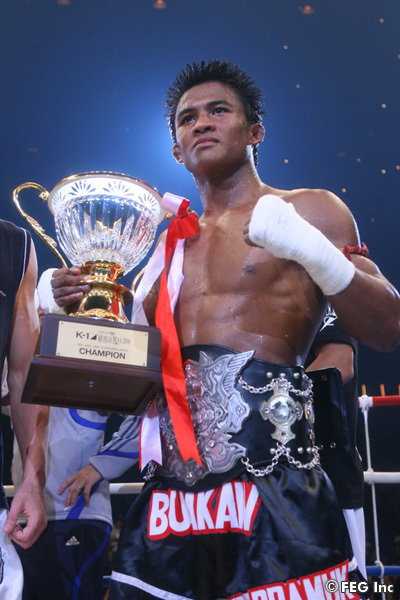 I was just wondering about the workouts/routines professional and amateur athletes have to go through and the effects it has on their bodies. I know they’re already in much better shape than an average person but take this guy…

Buakaw Por Pramuk…he’s one of the best (if not the best) kickboxer/stand up fighter in the world and he trains EIGHT HOURS A DAY, 6 days a week and the man is extremely ripped. But isn’t that way too much on his body to handle even with supplements like whey and creatine? I was on the swim team in high school and practice was 2 hours a day and I was worn out almost every day same with football practice in Freshman year.

Guys like Michael Phelps who do 5-6 hours straight of intensive swim everyday are in such good shape. IMO, this contradicts the common theory that its overtraining if you do more than lift 4 days a week or if you intense cardio for more than half an hour, etc.

Now it brings us to my question, I lift heavy 3 times a week and do cardio 2-3 times, I want to start doing some more things related to cardio like hitting the bags again and sparring cause I used to do it a lot last year, and I was also thinking about trying out this wrestling club at my school and they go at it pretty hard even for beginners and their schedule is on the same days that I lift, so I was wondering if its even possible that doing this (and making up by eating more) will not stunt my muscle gains.

The human body can tolerate quite a lot of work, as long as it’s built up over-time giving time for your body to adapt.

In other words, stop being such a pussy about overtraining.

[quote]Goodfellow wrote:
The human body can tolerate quite a lot of work, as long as it’s built up over-time giving time for your body to adapt.

In other words, stop being such a pussy about overtraining.[/quote]
How am I being a pussy? I’m simply asking about something I’m not sure about, I’m worried about overtraining because its hard for me to gain weight. Better to be safe than to be stupid.

Professional fighters train 6,7,8 hours a day because its their job. They dont have to worry about building houses or stocking shelves.

Back when I was just starting to lift I was training for 10 hours a week of karate in prep for nationals as well as 3 full body weights sessions and halfway through yr 12 and Im pretty sure I didnt overtrain.

As for your training, just make sure that your sessions are spaced out, at least 4-6 hours apart and you’ll be sweet. It might mean you have to lift in the mornings or whatever but you’ll ve able to do the things you want.

And remember you need a calorie surplus too gain mass, so if your energy output is going to increase so must the amount of food you eat.

The biggest thing that a lot of people have a hard time understanding is that athletes like that started at an early age and have built up their work capacity over years.

Look at someone like Layne Norton (prior to his pec tear, I’m glad to see that he’s back strong)- guy who thrives off of high volume, but he didn’t start out like it. SAID principle, the human body is capable of adapting to a lot more than the “overtraining bogeyman” people give it credit for.

For the prime example, Bulgarian weightlifters in the USSR.

Not only that, much of the time training is skills. I know for our college soccer team we do quite a bit more skill/tactic work (read: standing, drills with waiting in line, light ball work, etc) than fitness.

But you must EAT quite a bit more.

[quote]Trenchant wrote:
Not only that, much of the time training is skills. I know for our college soccer team we do quite a bit more skill/tactic work (read: standing, drills with waiting in line, light ball work, etc) than fitness.

But you must EAT quite a bit more.[/quote]

Glad someone said it. All of those people are eating 6-10,000 calories a day to support that kind of workload.

I think the body adjusts to your training over time. Whether that be 5 hours of intense cardio or 1 hour of intense weights the body will adapt. I know that I could not keep up with Lance Armstrong on a bike, but I know I’d kick his ass in the gym. Get my point. lol

Eat enough and rest enough. You will be fine.

Idk who said it but the whole “no such thing as overtraining, just undereating” and I’ll add undersleeping, is my philosophy. It works for me anyway.

setlle down, its just a joke.

DG has it absolutely right. It is amazing what can be done if someone eats to match their activity level, rests enough to repair their body, and spends enough time adapting to the workload.

It doesn’t hurt that it is their livelihood, that is motivation.

Whoever said steroids may have been joking but he’s not that far off base. Anybody who thinks only weak unsuccessful Americans use roids is just as bad as those who think steroids are the devil.

You also have to take account the age of many overseas thai fighters. Many of them peak much earlier than Americans…between 20 and 30. This is primarily because you can handle overtraining a little better when your T is naturally higher.

Fighters have to make weight, no sense in avoiding overtraining so that you can build 10 extra lbs of muscle and not be able to fight because you can’t make weight. Then have to fight someone who is naturally heavier then you and more comfortable at the weight that you just recently gained.

Practice 8 hours a day doesn’t mean INTENSE practice every minute of all 8 hours day in and day out. Stretching, massages, are intense recovery methods that are used during these supposed 8 hour days “training”. As well as technique which is often physiologically less demanding.

Last but not least…planning. The body has natural high energy/low energy cycles. People who train athletes tend to look long term. They’ll have a conditioning phase that started 2 or 3 years ago, a strength phase, another higher conditioning phase, a low frequency high intensity power phase, then a “camp” that ends a few days before competion where they are overtrained with a planned rebound effect. There are a ton of variables that they don’t tell you about when they tell you what they did the last 3 months before competion.