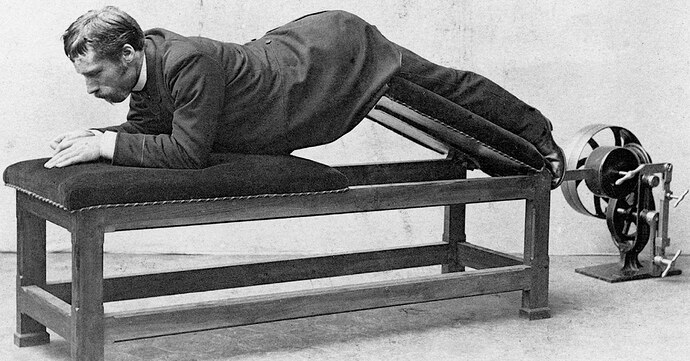 Cabinet Magazine posted a great feature on the secret history of Cybex-like exercise machines. Apparently, the first “gym” filled with mechanical fitness contraptions was built by Swedish physician Gustav Zander in the late 19th century. The article was written by Carolyn de la Pena, author of The Body Electric: How Strange Machines Built the Modern American.

From the article:
i mechanical horse was an early version of the Stairmaster, a contraption for cardiovascular fitness designed to imitate a “natural” activity. His stomach-punching apparatus evokes contemporary “ab-crunching” machines. What makes Zander so important, for anyone trying to trace the Cybex family tree, is what happened when his machines, created in a European cultural context, immigrated to the US in the early twentieth century. They are prototypes of the workout equipment now ubiquitous in American life…

His machines offered, Zander explained to an American audience, “a preventative against the evils engendered by a sedentary life and the seclusion of the office.” In fact, Zander claimed, there was no treatment quite so appropriate for these emerging white-collar men (and their wives) as his mechanized system. While doctors’ pills and potions might be easier to procure and quicker to ingest, the “increased well-being and capacity for work” gained by those who used his machines, he argued, was “rich compensation for the time bestowed on them.”

Thanks for the link…old skool fitness equipment history is a bit of a hobby of mine. I love to have the space and money to collect some of it or have reproductions made.