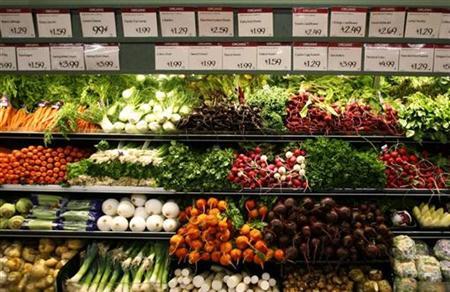 Organic food has no nutritional or health benefits over ordinary food, according to a major study published Wednesday.

LONDON (Reuters) - Organic food has no nutritional or health benefits over ordinary food, according to a major study published Wednesday.

Researchers from the London School of Hygiene & Tropical Medicine said consumers were paying higher prices for organic food because of its perceived health benefits, creating a global organic market worth an estimated $48 billion in 2007.

A systematic review of 162 scientific papers published in the scientific literature over the last 50 years, however, found there was no significant difference.

“A small number of differences in nutrient content were found to exist between organically and conventionally produced foodstuffs, but these are unlikely to be of any public health relevance,” said Alan Dangour, one of the report’s authors.

“Our review indicates that there is currently no evidence to support the selection of organically over conventionally produced foods on the basis of nutritional superiority.”

The results of research, which was commissioned by the British government’s Food Standards Agency, were published in the American Journal of Clinical Nutrition.

Sales of organic food have fallen in some markets, including Britain, as recession has led consumers to cut back on purchases.

The Soil Association said in April that growth in sales of organic products in Britain slowed to just 1.7 percent in 2008, well below the average annual growth rate of 26 percent over the last decade, following a plunge in demand at the end of the year.

Ha! That is funny!! My friend’s dad only buys organic foods and I bet he spends a fortune. I don’t think I have the balls to tell him he’s wasting his money though. So I’ll just silently laugh behind his back…

I eat organic simply because it tastes better, to me at least. Poultry & meats especially.

Any health benefits are a plus.

To paraphrase on of my favorite “guru’s”, “I’d rather use those chickens with all the anabolic s in them, i need all the help i can get.”

Heavy pesticide use is the only reason I choose certain organic foods, like raisins and salads. The rest of my produce is frozen, or “pesticide-proof”, like oranges and bananas. Can’t really afford grass-fed beef (or find it that easily).

Supposedly, the process involved with freezing knocks out 80-90% of pesticides.

[quote]stevo_ wrote:
To paraphrase on of my favorite “guru’s”, “I’d rather use those chickens with all the anabolic s in them, i need all the help i can get.”[/quote]

Problem with that is, most of the hormones given to chickens are estrogens…even cattle given trenbolone are often given an estrogen or estrogen-like compound to aid both overall weight and marbling. Don’t know how many of those hormones survive cooking, though.

I don’t think that most people buy organic foods because they think that the foods are more healthy…rather most people I know who buy organic think they’re less unhealthy (that is, citing the unknown potential risks of pesticides, chemical fertilizers, added hormones, and so on). Myself, ‘organic’ itself isn’t the magic word, but is more often associated with smaller farms and use of natural fertilizers. In my experience both cooking and eating, smaller scale farms make produce that might not look as pretty as the non-organic large farm stuff, but smells and tastes better.

I really miss one aspect of living in the Shasta (Northern California) area – every summer there were farmer’s markets where local farmers would sell really fantastic fruits and veggies, as well as grass-fed non-hormone-added beef, poultry (including guinea hen), venison, pork (including boar), emu, and lamb. That was really great stuff. Though I admit that for a really gourmet steak, the penned-in corn-fed cattle usually make tastier steaks, for all other cooking I liked the flavor (there’s a tendency towards a very slight gamy flavor to those meats which is great in stews and soups) and the knowledge that I might be getting a few more omega-3’s than with the grocery store meats.

“A small number of differences in nutrients”

Hormone, and a pesticide are two small differences I don’t want in my food.

[quote]RSGZ wrote:
I eat organic simply because it tastes better, to me at least.[/quote]

I buy some Organic foods purely for this reason. The taste difference is amazing! In my opinion I can taste a bigger difference in the Veggies then the Meat though.

Really depends on your interpretations of Healthy. I choose local organics because it taste better & is grown without chemicals. I believe to get the most nutrients out of veg/fruit it really depends on the season,light,temp,dirt & how it was delivered to your store. Regardless of it being organic or not.

Why is the burden of proof on organic to prove it’s safety, rather than the other way around.

Look, it just makes sense that produce grown organically is better than shit being sprayed with chemicals, yet people don’t want to actually believe it.

I for one don’t purchase organic exclusively because the price is sometimes too high. That doesn’t change the fact that to deny organic is better is kind of funny

Tells you a lot about where the author is coming from that it’s “Organic Food” vs. “Ordinary Food”, like there’s anything “ordinary” about GMOs or chemical pesticide, and it’s the “weird” option to eat the food sans the chemicals…

[quote]reshumate wrote:
Supposedly, the process involved with freezing knocks out 80-90% of pesticides.[/quote]

Granted, there may be something to this, but it sounds like bunk.

“Our review indicates that there is currently no evidence to support the selection of organically over conventionally produced foods on the basis of nutritional superiority.”

“Nutritional superiority” is the key term here. Organic foods may or may not have more nutrients, but they are SAFER than conventional foods. Nice little loophole in a very one-sided article.

Safer or not, organic milk tastes sssoooooo much better. Too bad it costs 4 times as much as regular milk

Agreed that organic tastes so much better, and also that the issues of health and pesticides were not considered in that study.

Organic may not have better nutritional value, but in general tends to have better farming and animal practices. I’d say by buying local organics your supporting your local communities much more than national corporations and supporting the big food manufacturers.

If you look at the actual studies, the only conclusion that can be drawn is that, based on their highly restricted yet poorly targeted examination of existing studies of organic foods, organic foods have not been proven to be substantially healthier or more nutritious than non-organics. The absolutist headline that “Organic food is no healthier”, or that organic “has no health benefit” is not supported by the studies themselves and is just as sensationalist-- and wrong-- as declaring as positive fact that organic foods will cure whatever disease that ails you and make your dick 3 feet long.

Even with the faults in the selection of studies which weren’t always based on the most theoretically useful parameters and measures, I noticed that their meta-analysis returned a remarkable number of p-values in the .06 to .1 range, meaning that just a handful more data points would have demonstrated significant differences in the categories in question. This is particularly relevant considering that their primary conclusions in the crop study for example were based on only 10 of 137 studies reviewed, and 5 of 27 in the livestock study.

Basically the reviews conclude that due to the limited quantity of comparable data from well designed studies, the authors are not prepared to authoritatively pronounce organics superior to conventional foods, based on the specific criteria they examined. This is the correct result. The headlines run by the news outlets went considerably further than this though and are guilty of the typical crap that passes for science journalism these days.

[quote]bushidobadboy wrote:
Yeah, but they take no account of pesticides, etc. Since they can negatively affect health, I would say that this study is a bit short sighted.

They also use the word “unlikely”, which is hardly conclusive.

There is also no mention of effect on the environment either. Run-off of fertilizers, etc can ruin waterways. No really that relevant to human health, but still a factor in favour of organic foods.

Short sighted to say the least! You have to wonder who sanctioned this study and the obvious for profit motive these guys had to spout such one sided shite!

Chemically soaked fruits and veg are a straight up no no in my book. God knows what I may have eaten in the past when I did’nt have a clue’ especially since some chemicals have since been banned. Coupled with the poisioning of the soil, air and water and the introduction of GM crops and they say organic foods don’t infer any health benefit greater than non-organic LOL!