I was curious on what all was your thoughts about BW exercises, specifically Chins and Dips, for mass gain

My question was spurred by certain disagreements I’ve seen on here about the effectiveness of certain BW exercises, such as well respected coaches (who I still respect) saying things such as

Often times there are those that are strictly part of the “BW cult” and those part of the “Iron-only group” but I belong to neither, I am neutral. I was just wondering what y’all thought on the true effectiveness of chins and dips for muscle gain.

Do you do them? Why or why not? Let’s discuss!

Chin-Ups/Pull-Ups, Dips, Push Ups, Lunges, Hanging Leg Raises are some of the best bodyweight exercises. You can definitely add some mass from there.

But no one is going to get HUGE from just doing those. You can build a pretty good back with chin-ups once you get to a point where you can do 5x10 with your bodyweight not too much more can be done.

If someone was ADAMANT about only doing bw movements you would have to start loading them which takes away from the “bodyweight only” aspect.

That can take you far for sure. It’s just easier to load a barbell and hit a 315 bench than trying to wrap 315lbs worth of weight around your waist to do dips or have someone load 315 on your back as you do push ups.

Me and my bros found an easy way to load dips 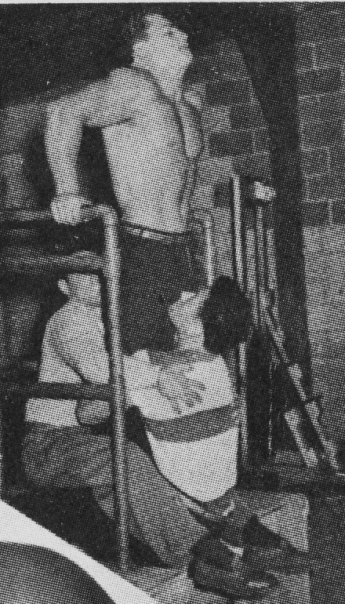 If someone was ADAMANT about only doing bw movements you would have to start loading them which takes away from the “bodyweight only” aspect.

Yep pretty much this… My view point is yes a untrained person will or can gain some size with BW only. Evidently one will hit a state of diminishing returns. Evidently it becomes less about strength and more muscle endurance once a certain threshold is reached. Now the big question is how optimal it is. Will that person look more muscular and be caring more muscle compared to a couch potato…sure. But no ones going to say Holy shit they are huge .

If you do them close grip, they do.

Bodyweight exercises are just like any other exercise, just that you need to add weight to make them challenging enough once you stronger.

You don’t have to do them if you don’t want to. There’s nothing special about them.

I guess it depends on what you consider a respectable level of lean mass gain.

Trying to get big and strong purely from bodyweight exercises is inefficient. Still possible, for sure, but time vested would have better results with something more fully fleshed out.

I like them either at the end of a workout, to completely exhaust the muscles trained, or at the beginning of a workout as part of a pre-exhaust strategy. Currently, I run a press giant set that goes

Strict press OR Behind the neck barbell press

Those dips fit in perfectly after pressing, because my shoulders may be toast from pressing, but they still have some juice in them for dipping. And then the dips completely fry out everything.

Another classic staple of mine is the “1000 push ups” workout, done with an EMOM style. I use 20 rep sets, done every minute, on the minute for 50 minutes. Once you get to 900 reps, the fatigue gets ridiculous, and at the end it’s a pretty insane pump, but it’s pretty recoverable, which is what I dig about bodyweight work.

Back when it meant something to be a training partner. Who has the worst gig in that setup though?

Here are 20 people doing one arm muscle ups. I bet they’re shredded, but are any of them what you call HUGE, or mass monsters?

Ironic that this subject matter would come up isn’t it?

I guess it depends on what you consider a respectable level of lean mass gain.

I only want functional mass, brah.

That’s what she said!

Ya gotta eat to gain weight. Doesn’t matter what you’re doing if you’re not eating. Chins and dips can build a good upper body, but it’s going to come down to food intake for mass or leanness.

After a given point they become something better suited to feeder work outs, warm ups, etc.

Good movements. Probably need to up the load sooner or later though unless you already weigh like a lot.

I hit reps with 40kg strapped to my waist the other day and pumped up my arms and lats good. As long as you progress in some way over time. With a dip belt it’s pretty easy to set up too

I do use BW exercises a lot. My sons school playground has pullup and dip bars and I just finished walking the dog 2 miles there, doing 100 pull-ups and 100 dips, and walking 2 miles back. Great workout and I personally believe it’s important to be able to manipulate your bodyweight, but I’m not gonna pack on mass from it, despite doing 50x more pull-ups than that reddit calisthenics master in the other thread.

This is the best example of all time of when too much “knowledge” becomes detrimental.

I really just found the

hilarious for some reason, and found it even more hilarious every time when Pwn would say it back to him.